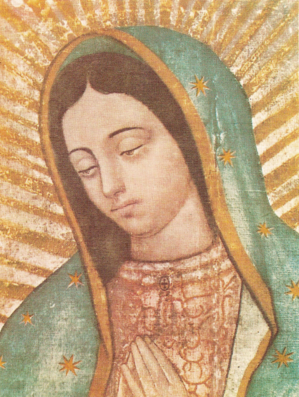 A Visitation
On December 9, 1531, the All–Holy Mother of God “set out and traveled to the hill country” (Lk 1:39) this time not of Judea, but of Mexico. Her visitation was not to her kinswoman Elizabeth, the wife of Zacharias, but to a humble peasant named Juan Diego. “How does this happen to me, that the Mother of my Lord should come to me?” (Lk 1:43).

The Music of Silence
The first accounts of Juan Diego’s experience relate that when he was summoned to the heights of Mount Tepeyac, he felt something compelling within, an urgent call. He experienced it as a kind of heavenly music, the music of silence, strange and beautiful all at once. “Let all flesh be silent at the presence of the Lord: for he is risen up out of his holy habitation (Zacharias 2:13). Juan Diego’s music of silence is not at all unlike the “still small voice”(1 Kings 19:12) that Elijah heard on Horeb.

By following the sound of the heavenly music, Juan Diego was led to behold the vision of “a woman clothed with the sun, with the moon under her feet, and on her head a crown of twelve stars. She was with child” (Apocalypse 12:1). What was this if not a kind of heavenly inbreaking, a theophany, a momentary pulling back of the veil? “God’s temple in heaven was opened, and the Ark of the Covenant could be seen in the temple” (Apocalypse 11:19).

Queen of God’s Faithful Poor
The woman clothed with the sun spoke to Juan Diego. She comforted him as she always comforts the poor, the lowly, the afflicted, the outcast, and the oppressed. Our Lady of Guadalupe is the queen of the anawim, God’s trusting faithful poor. Nothing, I think, is more moving than her message to Juan Diego:

Know for certain that I am the perfect and perpetual Virgin Mary, Mother of the True God. I am your merciful Mother, the Mother of all who love me, of those who cry to me, of those who have confidence in me. Do not be troubled or weighed down with grief. Do not fear any illness or vexation, anxiety or pain. Am I not here, who am your Mother? Are you not under my shadow and protection, in the folds of my mantle and the crossing of my arms?

The Flesh, Hinge of Salvation
And so there was music for the ear and vision for the eye. The plan of God revealed in the enfleshment of his Word is that all things created should be restored to holiness, and that our physical senses themselves should be graced and opened to the mysteries of God. “The flesh,” said Tertullian, “is the hinge of salvation.”

The Virgin chose two other signs before giving that of her miraculous image. The first involves touch. She touched Juan Diego. With an exquisitely maternal tenderness, she arranged roses, wondrous roses picked on a bare and windy hillside in December, in his cloak. The second sign concerns the roses themselves; they were fragrant. They must have been to Juan Diego like this second great feast of the Virgin in December is to us — as surprising like roses blooming in the snow. The third sign is the image, a portrait that is radiantly beautiful. A piece of heaven printed on the poor cloak of a poor man. It is this image that continues to surprise the world, to delight the children of the Virgin Mother, to be for us a kind of abiding visitation of the Mother of the Lord.

Bearers of the Hidden Christ
We hasten to Holy Mass because, like Juan Diego, we are compelled to follow the attraction of an unearthly music. Approaching the altar of God, we are touched by the flesh of God. We receive, not roses arranged close to our hearts, but Jesus Christ himself in the adorable mysteries of his Body and Blood.

The fragrance of Christ clings to those who receive Him, a fragrance sweeter than that of roses in December. Then, the image. Having partaken of the Holy Mysteries, we become bearers, not of a miraculous image, but of a far greater miracle. We will bear within our souls the same Jesus whom Mary bore in her womb. Caryll Houselander called it being a bearer of the hidden Christ. This do we carry Christ into places and situations where, in a very real sense, He has never been before. “See, I am coming to dwell among you, says the Lord” (Zacharias  2:14).