Skip to content
HomeLectio DivinaSaint Fionán, Patron of the Diocese of Meath 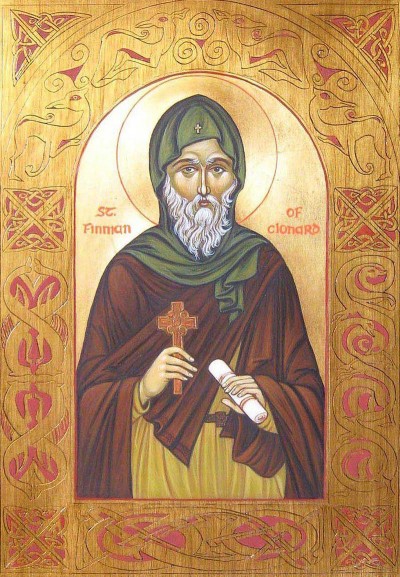 A Saint of the Boyne Valley

Today’s feast of Saint Fionán (Finian) (470–549) holds a special significance for the monks of Silverstream Priory, not only because Saint Finian is the patron of the Diocese of Meath, but also because he walked the Boyne Valley in which our own monastery is implanted. Saint Finian was a contemporary of Saint Benedict (480–547), thus establishing a link in time between Clonard (founded in 520)  and Monte Cassino (founded in 529). Our own Dom Finnian, being a native son of the Diocese of Meath, was named for its glorious patron.

The  monasticism established by Saint Finian would have much in common with that established by Saint Pachomius (292–348) in Egypt. Pachomian monasticism was characterized by vast villages of monks divided into households according to the trades or crafts exercised by the monks. Saint Finian’s monks too, in addition to their distinctive commitment to learning and education, would have exercised all the trades and crafts needed to build and maintain their community.

During its most glorious period the monastic school of Clonard counted more than 3000 scholars. Clonard suffered devastation under the Danes who swept through Ireland from the 9th to the 11th centuries. Saint Finian was buried at Clonard. His monastery fell into decline in the 12th century, but a Church of Ireland edifice built on the site of the original monastic church was in use until 1991 when its 16th century baptismal font was removed to Clonard’s Catholic Church of Saint Finian.

Mass and Office of the Saint

The mouth of the just man shall meditate wisdom, and his tongue shall speak judgment: the law of his God is in his heart. (Psalm 36:30)

For the ancients, to meditate signified the ceaseless oral repetition of Sacred Scripture. The repetition of the Word of God leads to its descent into the heart where it is made fruitful by the Holy Ghost. The Word of God, Sapientia, touches the palate of the soul with a divine sweetness; in the heart it becomes both fire and light. “And they said one to the other: Was not our heart burning within us, whilst he spoke in this way, and opened to us the scriptures?” (Luke 24:32).

Today the meditation of the Word of God, also known as lectio divina, is an indispensable element of the monastic life. It takes place first of all in the Oratory of the monastery where each monk in his choir stall applies himself to chant the psalms with understanding and to listen to the Word of God with the ear of the heart.  What begins anew each day in choir is prolonged in the solitude of each monk’s cell where, opening the Bible as one would open the door of the tabernacle, the monk falls on his knees to seek the Face of Christ shining through the lattice–work of the sacred text. He reads the text aloud, repeats it, allows it to become a prayer rising from his heart, and then falls silent in God to rest in Him and to adore Him.