Skip to content
HomeEssaysResurgent in the Midst of Crisis 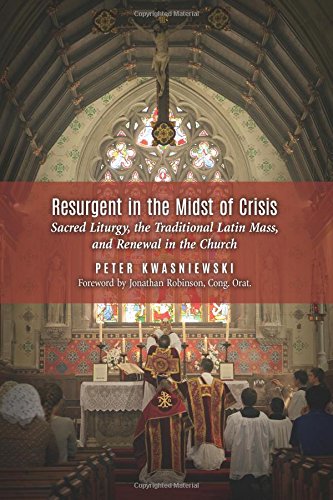 Dr Peter Kwasniewski’s Resurgent in the Midst of Crisis: Sacred Liturgy, the Traditional Latin Mass, and Renewal in the Church is a book to own and read now. It appears at a most opportune moment and addresses critical questions that many entertain, few articulate, and fewer attempt to answer. It happened that I was reading Dr Kwasniewski’s book while the papal visit was going on in Istanbul. The coincidence was fortuitous. The chasm opened over the past forty–five years between the Roman Rite of the Mass and the Byzantine Divine Liturgy is now so wide that one wonders if it will ever be bridged again. Until the artisans of the reforms of the late 1960s dynamited the Roman Rite it did effectively serve as a bridge of meeting whereupon Christians of both East and West could stand on common ground. Constantinople recognized in the ancient liturgy of the Church of Rome (with but a few problematic phrases to which we shall not allude here!) the faith of the Church undivided, the Church of the Fathers.  Rome, for her part, speaking through the Supreme Pontiffs, recognized in the ancient liturgy of Constantinople that same faith clothed in splendour, warming hearts, and illumining minds with the light of truth. Thus did Saint John Paul II write in the Apostolic Letter Orientale Lumen (2 May 1995):

Liturgical prayer in the East shows a great aptitude for involving the human person in his or her totality: the mystery is sung in the loftiness of its content, but also in the warmth of the sentiments it awakens in the heart of redeemed humanity. In the sacred act, even bodiliness is summoned to praise, and beauty, which in the East is one of the best loved names expressing the divine harmony and the model of humanity transfigured, appears everywhere: in the shape of the church, in the sounds, in the colors, in the lights, in the scents. The lengthy duration of the celebrations, the repeated invocations, everything expresses gradual identification with the mystery celebrated with one’s whole person. Thus the prayer of the Church already becomes participation in the heavenly liturgy, an anticipation of the final beatitude.

Many of those who viewed videos of the Holy Mass offered by the Pope and of the Divine Liturgy served by the Ecumenical Patriarch remarked to me, in so many words, that is it clear that Rome has dropped the ball liturgically. The papal Holy Mass was a sad affair stripped of the noble splendour of the Roman Rite. It seemed more a painful exercise in reaching people than a stretching heavenward in anticipation of the Kingdom of God. Woefully absent was the sober beauty of the Word of God carried aloft to heaven and delivered to the faithful in Gregorian Chant. Celebrated at an altar facing the people — not even ad orientem in Istanbul — it gave the Orthodox present, and those viewing it through the media, the distinct impression of a rite cobbled together to accommodate Protestant sensibilities, leaving many Orthodox hierarchs and faithful with the unpleasant impression of an irremediable fall from liturgical grace in Rome. Talk and gestures between Rome and the Orthodox Churches will amount to nothing unless the liturgical crisis in the West is addressed. Dr Kwasniewski addresses this very question in pages 40–2 of his book, saying inter alia:

Our myopic dismantlings and innovations only go to confirm the severe judgment passed by Orthodox theologians, namely that the Western Church is in the grip of rationalism, which is the source of our plague of modernism. For the Orthodox, a basic problem with the West is that our theology is a “thinker’s theology”; we come up with new theories, we get enamored of them, and then we start changing around our customs, practices and even our liturgy to fit our theories. In the East what takes precedence is the Tradition handed down from generation to generation; this must be the ultimate measure of our present attitudes and thoughts, and if we find ourselves straying from it or rebelling against it, we need repentance, conversion of mind.

Dr Kwasniewski goes on to say:

How could we have moved so much further away from the Byzantine Divine Liturgy, just when relations with the Orthodox have begun to show a potential for rapport that has not been seen for centuries? In spite of its many obvious external differences, in its spirit the old liturgy — especially when celebrated as a Solemn High Mass — is immediately accessible to an Eastern Christian. It speaks the same language of reverence, solemnity, beauty. As a confirmation of this, I have noticed in my travels that Eastern bishops, priests, and monks are attracted to and at peace in Western monasteries that have preserved the primacy of the liturgy, of chant, and of sacred symbols, and are living the contemplative vocation with seriousness and fervour.

Thus, the undeniable postconciliar crisis has to be traced back, in large measure, to the liturgical revolution, the dismantling of the traditional worship of the Catholic Church. The Mass is the quintessence of the faith: when it is strong, the lives of the faithful can be centered on the King and Center of all hearts, our Lord Jesus Christ. When it is strong, the missionary impulse must be strong: the desire to bring Protestants to the fullness of the faith by their personal conversion, the desire to seek a true union between East and West based upon a common spiritual patrimony.

Dr Kwasniewski’s compelling argument confirms what I, and others far more learned and enlightened than I, have long believed: that Benedictine monasteries have a particular responsibility to worship in organic continuity with the great liturgical tradition of the Undivided Church. Nearly thirty years ago a young Studite monk approached me after Solemn Vespers to say with astonishment and respect, “Here I have breathed the air of the undivided Church”. “Here”, of course, referred to the “here and now” of the liturgy which, when celebrated in organic continuity with the received tradition, is always a mysterious anticipation of the “there and then” of the Kingdom of God.