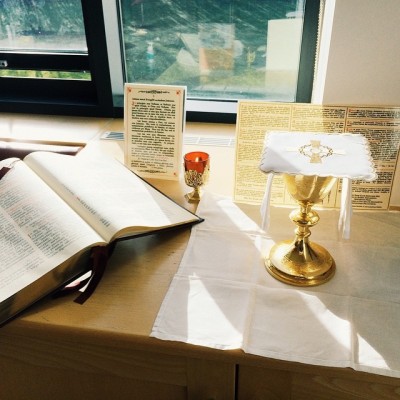 I have been five days in hospital with my long–standing pulmonary issues, and getting the best care possible in a splendid facility. A signal manifestation of God’s tender providence is that Dom Benedict, now a priest for over a fortnight, has been at my side and has offered Holy Mass in my hospital room.

No Better Thing than This to Do

I am searching for words to describe the experience. The immensity of the mystery of Redemption descended humbly, in so bare and hidden a way; it came to rest upon the makeshift altar in the corner and, from it, rose heavenward. Over the two of us — Dom Benedict at the altar and myself assisting from a chair — there fell an immense silence densely–vibrating with angelic hymns while, from outside my room’s closed door, I heard the comforting clatter and chatter of hospital life. The splendid page of Dom Gregory Dix, O.S.B., from the end of The Shape of the Liturgy, comes to mind:

Was ever another command so obeyed? For century after century, spreading slowly to every continent and country and among every race on earth, this action has been done, in every conceivable human circumstance, for every conceivable human need from infancy and before it to extreme old age and after it, from the pinnacle of earthly greatness to the refuge of fugitives in the caves and dens of the earth. Men have found no better thing than this to do for kings at their crowning and for criminals going to the scaffold; for armies in triumph or for a bride and bridegroom in a little country church; for the proclamation of a dogma or for a good crop of wheat; for the wisdom of the Parliament of a mighty nation or for a sick old woman afraid to die; for a schoolboy sitting an examination or for Columbus setting out to discover America; for the famine of whole provinces or for the soul of a dead lover; in thankfulness because my father did not die of pneumonia; for a village headman much tempted to return to fetich because the yams had failed; because the Turk was at the gates of Vienna; for the repentance of Margaret; for the settlement of a strike; for a son for a barren woman; for Captain so-and-so wounded and prisoner of war; while the lions roared in the nearby amphitheatre; on the beach at Dunkirk; while the hiss of scythes in the thick June grass came faintly through the windows of the church; tremulously, by an old monk on the fiftieth anniversary of his vows; furtively, by an exiled bishop who had hewn timber all day in a prison camp near Murmansk; gorgeously, for the canonisation of S. Joan of Arc—one could fill many pages with the reasons why men have done this, and not tell a hundredth part of them. And best of all, week by week and month by month, on a hundred thousand successive Sundays, faithfully, unfailingly, across all the parishes of Christendom, the pastors have done this just to make the plebs sancta Dei—the holy common people of God.

As things would have it, Dom Benedict wanted to offer a “first–fruits” votive Mass of the Blessed Virgin Mary; he chose the formulary indicated in the Missal for the Saturday before the third Sunday of November, that is, the Mass of the Blessed Virgin Mary, Mother of Divine Providence. How can I describe the effect of the Introit on my soul? Is not this particular Introit a mystic entering in of the Mother of God accompanied by the words of her Son? Is the Blessed Virgin Mary not present wheresoever she is invoked? And when the One invoking Holy Mary is her own Son, how can she not be present? “And whence is this to me, that the mother of my Lord should come to me?” (Luke 1:43).

“Woman, behold thy son”, said Jesus to his mother: then said He to the disciple whom He loved: “Behold, thy mother”. V. Confess ye unto the Lord, for He is good; for His mercy endureth for ever.

The Collect of this particular Mass is one of those prayers to which I return again and again:

O God, whose providence faileth not in its designs, we humbly entreat Thee, through the intercession of the Blessed Virgin Mary, Mother of Thy Son, that Thou wouldst put away from us all hurtful things, and give us all things which are profitable for us.

Whose Providence Faileth Not in Its Designs

It is in hours like these, when one finds oneself in hospital, frustrated by illness, held back from doing the things one would want to do by the intervention of an invisible Hand, that one needs to cling to this little fragment of the Church’s prayer: Deus, cujus providéntia in sui dispositióne non fállitur — “O God, whose providence faileth not in its designs”. Once that grounding principle has been confessed in faith, it becomes easy and even necessary to say the rest of the prayer: “We humbly entreat Thee, through the intercession of the Blessed Virgin Mary, Mother of Thy Son, that Thou wouldst put away from us all hurtful things, and give us all things which are profitable for us”.

“Put away from us all hurtful things, and give us all things which are profitable to us”.  Is this not the most perfect petition one can utter for oneself and for others? Today this petition rose heavenward from a little corner in a hospital room,  expressing the heart’s cry of so many others— sick and care–givers—  and enveloping all of them, albeit unknowingly, in the radiance shining from Room 204.