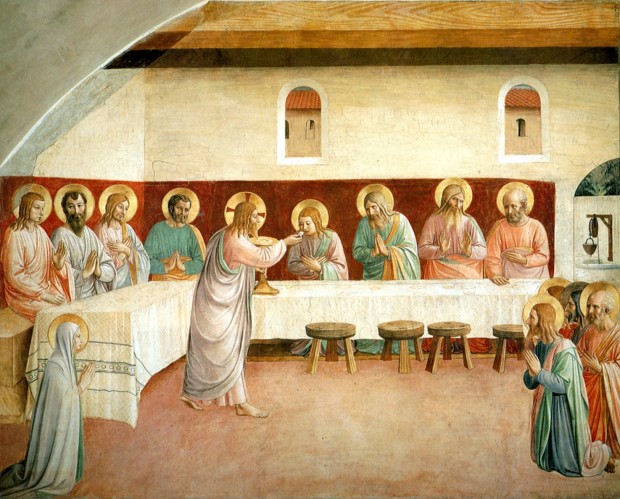 Enter into His passion, Accept His Defeat
We are at table with Jesus, listening to the words He is speaking to His apostles: “I tell you the truth, it is good that I go away, for if I go not away the Paraclete will not come to you. But if I go away I will send Him unto you” (John 16:7) His humanity had in fact become a snare to them. The body which hid Him from their soul must be removed from their sight; this body to which, though it was in the highest degree spiritual, their carnal ambitions clung so obstinately.

His body must be revealed to them as the mystic Sacrament of eternal Love. It must be set before them as the Crucified body with which they could renew contact only by the Cross. They must enter into His passion, accept His defeat, and feed upon His shame until they themselves died. Then It would be restored to them, but from within, as the glorified and risen body, the body perfectly spiritual, wholly within the Spirit and which the spirit alone can perceive by the illumination of faith. 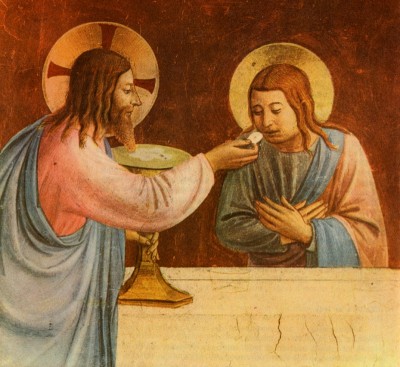 The Silent Word: Poverty’s Ultimate Denudation
It was thus that it was already set before them this evening under the sign which truly communicated it, under the form of bread, in which the visible element affords precisely that support which the senses require, that they may experience after their fashion the reality of the Presence which the Sacrament bestows upon us; yet in which the senses can perceive nothing, unless they have, so to speak, entered into the inwardness of faith. The Sacred Humanity will not be less close to them. It will be with them, in them; but their flesh will have no further part in It, and their ambitions will be annihilated in Its own annihilation.

The Word made flesh will in future be seen only under the appearance of an inanimate object. The Word made flesh, the eternal Word, will become the silent Word. The Divine Poverty has begun its ultimate denudation.

On the Cross the Godhead alone was hidden,
Here even the Humanity is concealed.

Only the silence of the entire being in the death of self can hear the mysterious cry of this silence. Only the poverty of spirit in which the soul renounces the possession of herself can divine the abysses of wisdom and love contained in this unutterable poverty.

Education, government, instruction, and spiritual direction, how all these would be changed, how efficacious and liberating they would all become if parents, politicians, teachers and priests brought to their task the mysterious effacement of the Host, if their words became silent, and the exercise of their authority had no other purpose than to open the soul to the silence of God.

All speech and reasoning, all eloquence and science, all methods and all psychologies, all slogans and suggestions, are not worth a minute’s silence, in which the soul, completely open, yields itself to the embrace of the Spirit.

Listen to the Invisible Doctor of Silence
This is the adorable secret of a visit to the Blessed Sacrament or a visit, possible even more frequently, to the Trinity present in our soul and in the souls of our brethren. Is not this the first Church to build: the invisible cathedral erected in our hearts to the silent Word ? There is no theology more persuasive than this doctrine which cannot be reduced to formulas, taught by the invisible Doctor of Silence, whose lowered eyes spare our shame so lovingly, and whose generous Poverty clothes our wretchedness with such a redeeming compassion.

The Home of Those Who Have Nothing
Thou art a secret so delicate that only the purest inwardness of the most intimate love can catch its whisper! Surely the poor should feel at home here, those who have nothing, know nothing, say nothing, are nothing. “O all ye that thirst, come to the waters; and ye that have no money, make haste, buy and eat, buy without money, purchase without price, wine and milk” (Isaias 55:1) You cannot feel yourselves strangers at the Poor Man’s Table.