Skip to content
HomeFlorilegiumListening to Saint Clement at Matins 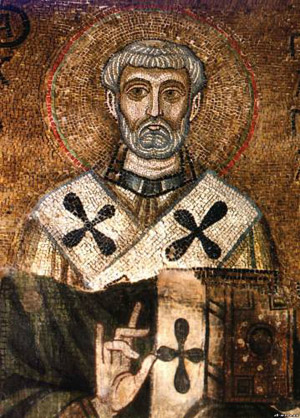 Yesterday at Matins we had this marvelous text. Our patristic lectionary for Matins is the fruit of Dom Benedict’s assiduous labours. There is an immense richness in the texts given us, morning after morning, well before the first glimmers of the rising sun.

From the Epistle of St Clement, Pope & Martyr, to the Corinthians

This is the way, beloved, in which we found our salvation; even Jesus Christ, the high priest of our oblations, the champion and defender of our weakness. Through him we look steadfastly to the heights of the heavens; through him we behold, as in a glass, the immaculate and lofty countenance of God the Father; through him the eyes of our heart were opened; through him our foolish and darkened understanding springs up again to his marvellous light; through him the Lord has willed us to taste of immortal knowledge; who, being the brightness of his glory, is so far better than the angels, as he has, by inheritance, obtained a more excellent name than they. For it is thus written: “He maketh his angels spirits, his ministers a flame of fire.”

But of his Son the Lord has thus said: “Thou art my Son, to-day have I begotten thee. Ask of me, and I will give thee the heathen for thine inheritance, and the uttermost parts of the world for thy possession.” And, again, he said unto him: “Sit on my right hand until I make thy enemies thy footstool.” Who then are the enemies? Even the wicked, and they who resist the will of God. Let us, therefore, men and brethren, carry on our warfare with all earnestness in his faultless ordinances. Let us consider those who fight under our rulers, how orderly and obediently and submissively they perform what is commanded them. All are not prefects, or commanders of thousands, or commanders of hundreds, or commanders of fifties, or such-like; but each in his own rank performs what has been ordered by the king or the commanders. The great cannot exist without the small, nor the small without the great. There is a certain mixture in all things, and from thence arises their use.

Let us take, for example, our body; the head is nothing without the feet, nor the feet without the head. The smallest members of the body are necessary and useful to the whole body, and all unite and work with harmonious obedience for the preservation of the whole body. Let, therefore, our whole body be saved in Christ Jesus, and let each be subject to his neighbour, according to the gift which he has received. Let not the strong man despise the weak, and let the weak pay regard to the strong. Let him that is rich minister to him that is poor. Let him that is poor praise God that he hath given unto him one by whom his want may be supplied. Let the wise show his wisdom, not in words, but in good deeds; let him that is humble not bear witness to himself, but leave another to bear witness to him. Let him that is pure in the flesh boast not of it, knowing that it is another that gives him the power of continence. Let us consider, brethren, of what matter we are made, of what sort and who we are that have come into the world, as it were out of the tomb and darkness. He that made and fashioned us has brought us into this world, having prepared beforehand his benefactions, even before we were born.