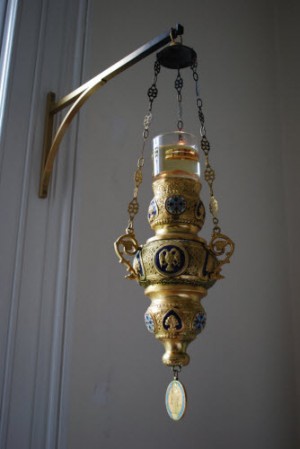 I rarely share passages from our Constitutions with the readers of Vultus Christi. The Constitutions of Silverstream Priory are derived from those written by Catherine–Mectilde de Bar in the 17th century, but the vocation they express is timeless and fresh. Each chapter of the Holy Rule of Saint Benedict has a corresponding section in the Constitutions.

Rule of Saint Benedict, Chapter 6.  Of the Practice of Silence

Let us do as saith the prophet: “I said, I will take heed to my ways, that I sin not with my tongue, I have placed a watch over my mouth; I became dumb and was silent, and held my peace even from good things.” Here the prophet sheweth that if we ought at times to refrain even from good words for the sake of silence, how much more ought we to abstain from evil words, on account of the punishment due to sin. Therefore, on account of the importance of silence, let leave to speak be seldom granted even to perfect disciples, although their conversation be good and holy and tending to edification; because it is written: “In much speaking thou shalt not avoid sin”; and elsewhere: “Death and life are in the power of the tongue.” For it becometh the master to speak and to teach, but it beseemeth the disciple to be silent and to listen. And therefore, if anything has to be asked of the Superior, let it be done with all humility and subjection of reverence. But as for buffoonery or idle words, such as move to laughter, we utterly condemn them in every place, nor do we allow the disciple to open his mouth in such discourse.

58. Saint James tells us that if any man offend not in word, the same is a perfect man.  In this chapter, our blessed father confirms the truth of this. And the prophet Isaias, treating of quietness, tells us that it eminently contains all justice and holiness.  One cannot express its excellence more worthily.  If proof you would have, seek no further than the silence practiced by the Incarnate Word on earth for thirty years, and even in the hour of His Passion, choosing rather that He should be attached to the Cross than break His mysterious silence.  He could have, with a single word, confounded his enemies, just as He could today confound the wicked, who outrage Him daily in the divine Sacrament of the Altar, profaning His tabernacles, and bearing away the sacred ciboria in sacrilegious hands, but in this mystery, as in His Passion, Jesus autem tacebat.  This is the lesson that He would teach the monks made over to Him by sacrifice.  They will endeavour to observe silence so exactly that in imitation of Him, they should rather suffer unjust accusation than prove their innocence by long discourses, mindful that sacred silence befits sons of the Most Holy Sacrament.

59. The silence of the Sacred Host must reign, then, not only over the hearts, minds, and lips of the monks, but over the entire monastery and its land, so as to foster an atmosphere of order and of peace conducive to the prayer of the heart in a spirit of ceaseless adoration.

60.  By practicing silence at all times, the monks will avoid innumerable sins of the tongue, and foster, both within themselves and within the monastery, a space of optimal resonance to the Word of God.

61.  By assiduous contemplation and adoration of the Sacred Host, the monks will come to love the observance of silence by which it is given them to imitate the sacramental state of the Incarnate Word, who, now in the Most Holy Sacrament of the Altar, as once in His hidden life and bitter Passion, remains silent and still.