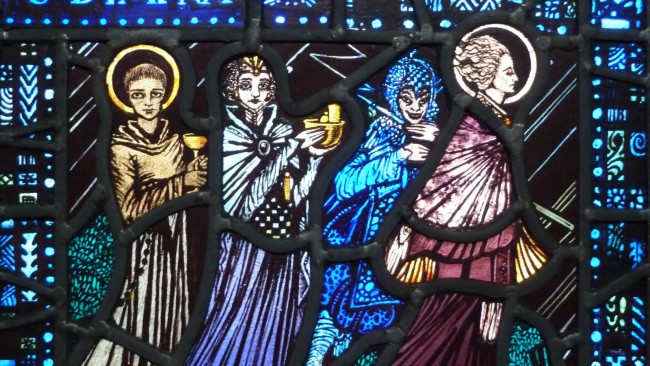 This evening at 8:00 at Silverstream Priory: Sermon with Novena Prayer and Blessing with the Relic of Saint Dymphna.

There is a magnificent stained glass window by Harry Clarke in Saint Joseph’s Church, Carrickmacross, County Monaghan; it depicts a noble Saint Dymphna looking very courageous and resolute; her father’s court jester turned out in full costume; the jester’s wife bearing a bowl with candles in it; and, at the very end, Saint Gerebernus the priest. Saint Gerebernus is shown dressed as a monk, with prayer beads hanging to the side of his habit. He has a beautiful gaze; Harry Clarke has given him big eyes, open wide, and radiant with purity. Looking at him, one wants to cry out: “Blessed are the clean of heart, for they shall see God!”

In his hands, Saint Gerebernus is holding a golden chalice, the symbol of his priesthood and of much more. I seem to hear the mysterious conversation between the mother of the Apostles James and John and Our Lord:

Then came to him the mother of the sons of Zebedee with her sons, adoring and asking something of him. Who said to her: What wilt thou? She saith to him: Say that these my two sons may sit, the one on thy right hand, and the other on thy left, in thy kingdom. And Jesus answering, said: You know not what you ask. Can you drink the chalice that I shall drink? (Matthew 20:20–22)

A Priest for the Altar

Let us dwell, for a moment, on this magnificent depiction of Saint Gerebernus. What is it really saying? First of all, he comes last in this little procession of four, just as the priest enters last when going to the altar for the Holy Sacrifice. He is holding the chalice; the bishop presents the chalice to a priest in the rite of ordination with these words: “Receive the power to offer sacrifice to God, and to celebrate Masses for the living and the dead, in the name of the Lord.” Saint Gerebernus knows what he is about. He is a priest for the altar, that is , to offer the Holy Sacrifice standing before the altar, and to be offered from the altar as a victim with Christ. The life of a priest only makes sense if he is on his way to the altar or coming from the altar.

Saint Gerebernus is bearing the chalice so that Dymphna will not, at any time of her journey, be without the divine assistance of the Holy Mysteries. I am reminded of what one of the holy martyrs of Abitina said in the year 304, under the great persecution of Diocletian: Sine dominico non possumus, “Without this thing that is the Lord’s, without Sunday, the Day of the Lord —the Day of the Eucharist— we cannot live. These Christians were apprehended in flagrant violation of imperial law; they were found guilty of assembling on Sunday to celebrate the Most Holy Eucharist. When the Proconsul interrogated them, demanding to know why they violated the law, Emeritus, the man who hosted the gathering in his own house, responded, “Because without what belongs to the Lord, sine dominico, we cannot live, we cannot go on, non possumus.” For these Christians, Sunday was the Day of the Sacred Mysteries, the Day of the Holy Sacrifice, the one day on which they assembled to receive the life–giving Body and Blood of the Lord. Emeritus’ response means, “Without the Most Holy Eucharist, Sacrament and Sacrifice, we cannot survive.” This is why Harry Clark pictures Saint Gerebernus bearing the chalice; Gerebernus and Dymphna, like the martyrs of Abitina, knew that without the Most Holy Eucharist there would be nothing to sustain them.

Without It I Could Not Go On

My own grandmother, Margaret Gilbride Kirby, who went to daily Mass for as long as her legs would carry her down the street to church each morning, used to say something very similar to what Emeritus said in the year 304: “Without it I could not go on”. And she used to add, “I don’t know how people get along without it.” It was the Catholic faith; the mystery of faith, the Holy Mass itself.

Saint Gerebernus, carrying his chalice, accompanied Saint Dymphna because he was, first of all and above all, a sacrificing priest or what the English Protestants called, with derision, “a massing priest.” His function was to provide Dymphna, even as she fled her homeland, with the one thing that only a priest can give: the adorable Body and Blood of Christ offered in sacrifice and given in Holy Communion. When, at length, the chieftain Damon and his man discovered where Dymphna was hiding, it was the solemn hour of the chalice, that is, the hour of the sacrifice. Gerebernus enters into the prayer of Jesus in Gethsemani:

Father, if thou wilt, remove this chalice from me: but yet not my will, but thine be done. And there appeared to him an angel from heaven, strengthening him. And being in an agony, he prayed the longer. (Luke 22:42–43)

Damon ordered his men to behead Gerebernus, making him, in that hour, a priest fully accomplished, for the complete priest is the martyred priest. Gerebernus was there to consecrate Dymphna, and to offer her in advance as “a pure victim, a holy victim, a spotless victim”, a victim united to the immolated Lamb who, centuries later, would show Himself standing upon an altar at Knock.

What shall I render to the Lord, for all the things he hath rendered unto me? I will take the chalice of salvation; and I will call upon the name of the Lord. I will pay my vows to the Lord before all his people: Precious in the sight of the Lord is the death of his saints.(Psalm 115:12–15)