This evening at 8:00 at Silverstream Priory: Sermon with Novena Prayer and Blessing with the Relic of Saint Dymphna.

The Loss of a Mother

I am struck by the number of saints whose childhood was marked by the loss of a mother. Saint Thérèse of the Child Jesus comes to mind first. You will recall that Thérèse was four years old when her mother, Blessed Zélie Martin, aged 45, died of breast cancer. Concerning the effect of her mother’s death on her, Saint Thérèse wrote: “When Mummy died, my happy disposition changed. I had been so lively and open; now I became diffident and oversensitive, crying if anyone looked at me. I was only happy if no one took notice of me… It was only in the intimacy of my own family, where everyone was wonderfully kind, that I could be more myself.”

Later, when Thérèse was suffering from a mysterious illness — it was both emotional and physical — the Blessed Virgin cured her by smiling upon her. Saint Thérèse discovered that the Blessed Virgin Mary loved her with a motherly tenderness surpassing the tenderness of any mother on earth. Thérèse also discovered the fatherhood of God and this, more than anything else, transformed her, healed her, and raised her to the heights of holiness. One day one of her sisters was surprised to find Thérèse alone in her cell, her eyes filled with tears. “What is it?” she asked. Thérèse replied that she had been thinking about the meaning of the Our Father. “It is so sweet,” she said, “to call God our Father.”

No two souls journey along exactly the same path. There are souls who discover the Fatherhood of God beginning with the Blessed Virgin Mary, the Mother of Jesus. Other souls discover the Blessed Virgin Mary beginning with a realisation of the Fatherhood of God. In the first case, a soul is touched by the goodness and tenderness of Our Lady and, through her maternal Heart, discovers Jesus, the fruit of her womb, the Son who says, “Nobody can come to the Father, except through me. If you had learned to recognize me, you would have learned to recognize my Father too” (John 14:6–7). This Marian grace of conversion would have been the experience of Alphonse Ratisbonne, the worldly young Jew miraculously transformed by an apparition of the Blessed Virgin Mary at the Church of Sant’Andrea delle Fratte in Rome on January 20, 1842.

Other souls, moved by the Holy Ghost begin to call God, “Father” and, through the experience of the Fatherhood of God, discover the gift of the Son, the child of the Virgin Mary. “But when the fulness of the time was come, God sent his Son, made of a woman, made under the law: That he might redeem them who were under the law: that we might receive the adoption of sons. And because you are sons, God hath sent the Spirit of his Son into your hearts, crying: Abba, Father” (Galatians 4:4–6).

There are still other souls, drawn to the words and deeds of Jesus in the Gospels, to the Face of Jesus, and to His Heart. These souls, having consented to the loving friendship of Jesus, hear Him say, “Behold thy mother” (John 19:27) and, again, “If a man has any love for me, he will be true to my word; and then he will win my Father’s love, and we will both come to him, and make our continual abode with him” (John 14:23). This would have been the experience of Saul on the road to Damascus, of Saint Francis of Assisi, and of a multitude of other saints.

I must also speak, however briefly, of souls converted by a powerful Eucharistic grace — ravished out of themselves and into God by the real presence of Jesus in the Most Blessed Sacrament. The most dramatic example of a Eucharistic conversion is that of another young  Jew, the concert pianist Hermann Cohen, who, in May 1847, was smitten by the Sacred Host. He fell to his knees, mysteriously compelled to adore the Hidden God, and when he rose, he already belonged to Christ, through whom He came to believe in and to experience the Fatherhood of God and the maternal Heart of Mary. In the same way, the French atheist André Frossard, entered the chapel of the Adoration Réparatrice in Paris on July 8, 1935. The Blessed Sacrament was exposed in the monstrance; in the twinkling of an eye, Frossard passed from denying the existence of God to being overwhelmed by the reality of God as both Presence and Person.

God never allows us to suffer a deprivation without giving us something to turn that deprivation into fulfillment, to make the deficit something superabundant, to change what appears to be negative into room for what is divinely positive. The something or, more exactly, the Someone who does this is, in every case, God Himself, but God operating through the mediation of His Son, Our Lord Jesus Christ in the Sacraments given to His Church; through the Mother of His Son, the Blessed Virgin Mary; through the Angels, through the Saints in heaven, and through the friends of God on earth. 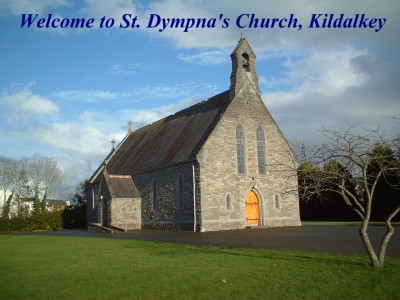 Saint Dymphna was fourteen years old when she lost her mother. Her mother’s death was the beginning of the drama that would lead to her martyrdom. After his wife’s death Dymphna’s father, the chieftain Damon, fell into such sorrow that he lost his mind for grief. He was counseled to marry again, but could nowhere find a women as lovely as his own wife had been. When it was brought to his attention that Dymphna resembled her mother and that she was of a marriageable age, Damon laid plans to wed his own daughter and oblige her to enter into an incestuous relationship with him. Horrified at the proposal, and unable to deter her father from pursuing his depraved intentions, Dymphna confided in her spiritual father, the priest Gerebernus. Together with two trusted servants they fled County Monaghan in a south–easterly direction towards the coast. They spent a night at Kildalkey Abbey; one wonders if they did not pass through Julianstown and Stamullen. Descending the coast, they boarded a ship bound for the Continent and made their way to Gheel in Flanders where, hidden in the forest, there was a chapel dedicated to Saint Martin of Tours. Dymphna and her three companions began to live in the shadow of Saint Martin’s chapel, looking after the poor and the sick.

I Will Fear No Evils

I can almost hear Saint Dymphna praying in the words of the psalmist, and making them her own: “Father and mother may forsake me, but the Lord takes me into his care” (Psalm 26:10). And again, “For though I should walk in the midst of the shadow of death, I will fear no evils, for thou art with me. Thy rod and thy staff, they have comforted me” (Psalm 22:4).

Meanwhile, back in Ireland, Damon launched a search for his runaway daughter. Tipped off by the gold coins from Ireland that Dymphna had spent in a hostel along the way, Damon’s men traced Dymphna to her refuge in Flanders. Unable to convince her to return to her father, they sent him a message to come in person to compel her to do his bidding. Faced with Dymphna’s resistance, Damon ordered his men to kill her defender, the priest Gereburnus. When Dymphna persisted in her refusal to return with him to Ireland, Damon drew his sword and, on the spot, beheaded his own daughter. Dymphna was 15 years old at the time of her martyrdom.

Local people interred the priest and the young virgin in a cave. When, years later, they returned to the site to remove the bodies to a more worthy place of burial, they were astonished to discover two sarcophagi of white stone, one of which bore a red tile inscribed with the name Dymphna. Saint Dymphna’s remains were enshrined in a local church in Gheel; the body of Saint Gerebernus was stolen by relic thieves, and removed to Santbeck in the Rhine Valley in Germany.

Saint Dymphna’s tomb became a place of pilgrimage. Countless people attested to the healings received through her intercession. The young Virgin–Martyr seemed to exercise a special power in favour of the mentally ill, the distraught, the depressed, the anxious, and people suffering from epilepsy.

Saint Dymphna’s whole drama can be traced back to the death of her mother. Any damage to the relationship between a child and his mother leaves the child fragile and vulnerable. At the same time, we see in Saint Dymphna an amazing strength of character and a spiritual maturity that reveals something of the influence her mother had over her during her formative years. Thus was Saint Dymphna able to give her loss over to God, to surrender to the Father “from whom every fatherhood on earth takes its name” (Ephesians 3:15) her deficit, trusting in His love to make grace superabound where sin and violence had abounded and, for a moment, appeared to triumph. “And where sin abounded, grace did more abound” (Romans 5:20).

Recourse to the Love of God

We bring to our prayer today mothers and their daughters, mothers and their sons, and children mourning the loss of a mother or deprived of a mother’s loving care. We recommend to the Blessed Virgin Mary, and to the intercession of Saint Dymphna, all people left vulnerable and fragile by the death or absence of a mother. The love of God the Father, transmitted to us through the Heart of Jesus, and through the maternal Heart of Mary, is an all–powerful love capable of righting every wrong, of filling up every deficit, and of bringing new life out of death.