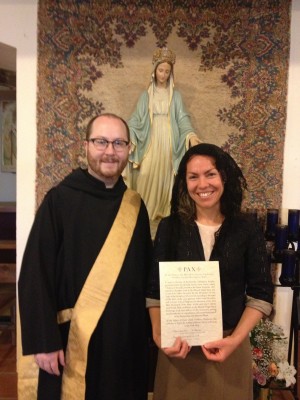 Divine Mercy
My dear sons and daughters, it is not by mere coincidence that you have come together today, on this Sunday rather than on another, to make the offering of yourselves, with Christ, to the Father, as Benedictine Oblates of Silverstream Priory. Today, the Second Sunday of the Pasch of the Lord, is also the festival of Divine Mercy. This is, as you know, a new and relatively recent enrichment of the liturgy, an adornment added to the ancient splendours of Paschaltide by the express will of Saint John Paul II. We can welcome this enrichment, this adornment of the liturgical calendar in the way previous generations welcomed the once new and innovative feasts of Corpus Christi and of the Sacred Heart.

God, Rich in Mercy
Some of you may remember the promulgation of Saint John Paul II’s encyclical on Divine Mercy in 1980. It was entitled Dives in Misericordia, “God, rich in mercy”, and, at the time, it resonated in the hearts of many as an invitation to return to the Father and to believe boldly in His tenderness for the most fragile and wounded among us. Saint John Paul II, personally touched to the quick by the message of his humble compatriot, Saint Faustina, was compelled to share her message with the whole Church and, indeed, with the world. This he did, not only by his teaching, but also by integrating Saint Faustina’s message into the liturgy itself.

Saint Benedict the Merciful
For us, children of Saint Benedict, the mercy of God is something that surrounds us on all sides. It is above us and below us; it precedes us and follows us; it lifts us when we fall and sustains us in the midst of life’s uncertainties.

Saint Benedict uses the word misericordia seven times in the Holy Rule. Misericordia is, literally, that quality of love by which one takes to heart the misery of another. Seven is the mystic number that signifies fullness, superabundance, and completion. Benedictine life is a school of Divine Mercy, and your Oblation today relates to Divine Mercy in three ways.

God Has Shown You Mercy
First of all, if you are here, if you have been charmed by the wisdom and sweetness of the Rule of Saint Benedict, if you have persevered thus far in your vocation, if you are about to stand before the altar to offer yourselves to God, it is because God has shown you mercy. With Our Blessed Lady you can say, “He hath received His child Israel, being mindful of His mercy” (Luke 1:54). You are, each one of you, that child Israel, dear to God, and lifted up to be pressed against His Heart.

Abandonment to the Mercy of God
Secondly, your Oblation is a public act of abandonment to the Mercy of God: “Receive me, O Lord, according to Thy Word, and I shall live; let me not be disappointed in my hope” (Psalm 118:116). By your Oblation, you will throw yourselves, boldly and blindly, into the arms of Divine Mercy, imitating the Oblation of Jesus from the altar of the Cross: “Father, into Thy hands I commend my spirit” (Luke 23:46).

Praising the Mercy of God
Thirdly, your Oblation is a glorification of the Mercy of God; it is an act of praise. By it, you are saying loudly and clearly, for all to hear, Misericordias Domini in aeternum cantabo, “The mercies of the Lord, I will sing forever” (Psalm 88:2). And with Jesus, the New David, you are intoning a new hymn of praise: “I confess to Thee, O Father, Lord of heaven and earth, because Thou hast hidden these things from the wise and prudent, and hast revealed them to little ones. Yea, Father, for so it hath seemed good in Thy sight” (Luke 10:21).

Mercy in the Holy Rule
If we were to review, even summarily, the seven references to Divine Mercy in the Rule of Saint Benedict, what would we find? Let us attempt to do it briefly, going through the Holy Rule from back to front. Each reference to Divine Mercy is a kind of step towards the altar where you will make your Oblation and, by the grace of the Holy Ghost, unite yourselves to Christ, Victim and Priest.

Preferring Mercy to Justice
In Chapter 64 of the Holy Rule, Saint Benedict says that the abbot must be merciful, ever preferring mercy to justice, that he himself may obtain mercy. Each one of you, especially the fathers and mothers among you, will discover innumerable occasions on which to prefer mercy to justice. Only in this way will you have a claim to mercy for yourselves. Learn to be excessively merciful, for to those who are excessively merciful, God will show an excessive mercy.

Mercy Poured Out
In Chapter 53 of the Holy Rule, Saint Benedict describes the rituals of monastic hospitality. In doing this, he quotes the psalmist: ““We have received Thy mercy, O God, in the midst of Thy Temple” (Psalm 47:10). The monastery — be it Silverstream Priory or the domestic cloister of your own homes — is a place wherein the mercy of God is poured out upon all who come to receive it. There is no need to travel to the east or to the west, to the north or to the south, in search of a place where Divine Mercy is poured out. In every home where there are hearts in need of the mercy of God and open to receive it, mercy will be given, rising all radiant against the darkness “like the Dayspring from on high” (Luke 1:78).

Mercy Towards the Weak
In Chapter 37 of the Holy Rule, Saint Benedict speaks of the mercy that human nature readily shows towards the very old and the very young. For Saint Benedict, every weakness constitutes an irrefutable claim on Divine Mercy. At certain seasons and hours in life, we ourselves are the weak ones in need of mercy, and at other seasons and hours, we are the instruments of Divine Mercy, the finite channels through which the pity of the Heart of Jesus reaches others to soothe, to comfort, and to heal them.

Mercy Received Humbly
In Chapter 34 of the Holy Rule, Saint Benedict tells us how we are to act when mercy is shown us. We are to receive it humbly, gratefully, and simply, not as something due to us, but as a wondrous gift surpassing both what we deserve and what we dare not ask.

The Confession of Mercy
In Chapter 7 of the Holy Rule, Saint Benedict presents the monk as a sinner so marked by the mercy of God, that he confesses it at every turn. “Confess to the Lord, for He is good, and His mercy endureth for ever” (Psalm 117:1). What is the Divine Office, the Work to which no other work can be preferred, if not the ceaseless confession of the Mercy of God, by day and by night?

And Never to Despair of the Mercy of God
Finally, in Chapter 4 of the Holy Rule, Saint Benedict gives us the one phrase that, to my mind, qualifies him as Doctor of Divine Mercy: Et de Dei misericordia numquam desperare. “And never to despair of the mercy of God”. In the end, it is this that makes the monk; it is this that makes the Oblate: the perfect child of Saint Benedict is the one who never despairs of the mercy of God. Others may tell you that monastic perfection consists in this observance or that, in the acquisition of virtue, or in the eradication of vice. I shall not contest these affirmations, but I shall place one before and after, over and above them all: the perfect monk — the perfect Oblate — is the one who stubbornly believes in the mercy of God, “hoping against hope,” even — and especially — when the edifice of his virtues and the ability to carry out every other injunction of the Holy Rule lie in ruins and wreckage all about him.

On the Altar
This is, ultimately, the meaning of your Oblation today. Imagine yourselves wrapped up, together with the bread and wine for the Holy Sacrifice, in a corporal of purest white linen. Your lives will be placed on the altar, laid there with the host and with the chalice, all in readiness for the descent of Divine Mercy.   Once something is placed on the altar, it becomes, Saint Augustine says, sacrificium, a sacrifice made over to God.

God takes whatever we give Him in the Holy Sacrifice. Christ, the Angel of the Father — His Messenger — descends from heaven and, like the eagle in the Canticle of Moses (cf. Deuteronomy 32:11) carries aloft, on the strong and immense wings of His mercy, the offerings set out for the Father upon the altars of His Church. Or again, God sends a fire of mercy from heaven to consume those who, binding themselves to Christ, the one spotless Lamb, would pass over into His sacrifice, becoming with Him a pure victim, a holy victim, an immaculate victim giving glory to God and obtaining torrents of mercy for souls.

Mother Mectilde de Bar
There is one last detail that only God could have arranged: today, the Second Sunday of Easter, is the liturgical anniversary of the death in 1698 of the great 17th century French Benedictine who, through her writings and her intercession, has become for us a “mystagogue” of the Sacred Host: Mother Mectilde of the Holy Sacrament. I pray that as she becomes better known among us and in the English–speaking world, Mother Mectilde, the Teresa of the Benedictine Order,— will continue to initiate us into the mysteries of “the Lamb slain from the beginning of the world” (Apocalypse 13:8), the very Lamb who appeared in glory at Knock in Ireland, and who abides, silent, humble, and hidden, in the Sacrament of His Love.

Into the Holocaust of Merciful Love
May God receive your Oblation today and consume you — each one of you — as victims cast irretrievably into the holocaust of His Merciful Love. Amen.