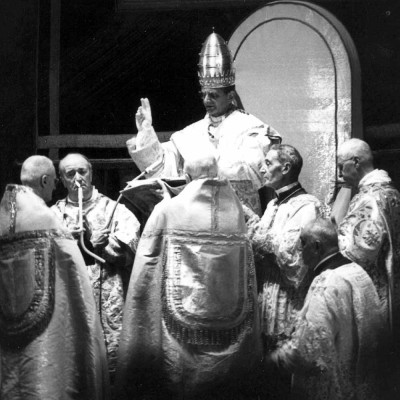 The Highjacking of the Reform

I have believed for some time that the Consilium ad exsequendam Constitutionem de sacra Liturgia rather overstepped its mandate and, to put it bluntly, hijacked the reforms intended by the Fathers of the Second Vatican Council. Father Louis Bouyer’s journal — which I had occasion to read in unpublished manuscript form — makes it clear, alas, that there was a good deal of double–agent style manipulation going on: the Holy Father being told what was the mind of the experts of the Consilium, and the experts of the Consilium being told what was the mind of the Holy Father. In fact, what prevailed was the mind of a few pushers for reforms exceeding what is envisaged in Sacrosanctum Concilium.

Three things came into play to make the perfect liturgical storm: 1) a culture of uncritical obedience at nearly every level of the ecclesiastical bureaucracy; 2) a lack of communication and transparency in various key instances — the Pontifical Household, the Consilium itself, the Sacred Congregation of Rites, the Holy Office, and the Secretariat of State — that should have been working together towards a common goal, and 3) a clergy (particularly in the English–speaking world) largely in the grip of a legalistic minimalism that left them unprepared to welcome and implement liturgical reforms. The biased transmission of the decisions of the Consilium by national conferences of bishops, dioceses, and parishes is another story.

In spite of so many obstacles and risks, the appearance of the so–called 1965 Missale Romanum was thought by many to be the terminus ad quem of the Consilium‘s work on the reform of the Mass. Monsignor Klaus Gamber writes:

As recently as May 28, 1966, in an official letter written on behalf of the Pope and addressed to the Abbot of Beuron, who had sent to the Pope a copy of the new (post-Council) edition of the Schott-Missal, then Cardinal Secretary of State Cicognani stated, “The singular characteristic and primary importance of this new edition is that it [the revisions of 1965] reflects completely the intent of the Council’s Constitution on the Sacred Liturgy.”

The 1965 Missale Romanum represented a faithful implementation of Sacrosanctum Concilium. Had it been kept in continuous use for, let us say, fifty to a hundred years, the Church would, I think, have enjoyed a period of greater liturgical serenity and the Roman Rite a healthy spatium of organic development.

The 1965 Missale Romanum was completed by a Lectionary for Weekdays.  The edition I have on hand was published by Geoffrey Chapman in 1966. The Primate of Ireland, William Cardinal Conway, Archbishop of Armagh, introduces the Lectionary:

This series of Scripture readings for weekday Masses is designed to implement paragraph 51 of the Constitution “De Sacra Liturgia” which asks that the treasures of Sacred Scripture be more widely opened to the faithful in the Liturgy of the Word.

Heretofore people attending daily Mass heard the same extracts from Sacred Scripture read three or four times weekly, practically throughout the entire year. With the new use of this series they will hear almost the whole of each of the four gospels each year and, in alternate years, readings from the other books of the New Testament and from the books of the Old Testment which record the early beginnings of the history of salvation. The readings have been chosen with great care and with reference to the particular aspect of the paschal mystery which is being celebrated at each season of the liturgical year.

This series has now been approved by the Holy See for experimental use. The liturgical committees of the hierarchies of England, Ireland, and Scotland are taking a leading part in this experiment, for the English–speaking world, by welcoming the series and giving permission for its general use. Thus the need has arisen for a suitable lectionary. That need is now supplied with the publication of the present volume which, in a worthy format, gives the entire two–year cycle according to the beautiful Revised Standard Version. I have no doubt that its appearance will be very greatly appreciated.

The Prayer of the Faithful

The Missale Romanum of 1965 provides for the Oratio Communis seu Fidelium, in accordance with Sacrosanctum Concilium, article 53:

Especially on Sundays and feasts of obligation there is to be restored, after the Gospel and the homily, “the common prayer” or “the prayer of the faithful.” By this prayer, in which the people are to take part, intercession will be made for holy Church, for the civil authorities, for those oppressed by various needs, for all mankind, and for the salvation of the entire world.

The sobriety of the Roman Rite is maintained; there is no provision for a verbose introduction to the Oratio Fidelium by the priest. The rubric concerning it reads:

The Symbol (Creed) being completed, the celebrant, turned towards the people, says, “The Lord be with you”. . . . Thereupon he adds, “Let us pray,” and makes the Oratio Fidelium.

The Weight–Bearing Structure of the Mass

While some might object to the loss of the complete psalm Iudica at the foot of the altar and of the Last Gospel, the weight–bearing structure of the Mass remains untouched. The aims advanced by the Council Fathers in Sacrosanctum Concilium are achieved, and the organic continuity of the Mass of the Roman Rite is admirably preserved in the context of its traditional round of seasons, fasts, and feasts; the precious Propers of the Mass are untouched. The Roman Canon, the Holy Sacrifice’s venerable, distinctive, and central element remains unchanged, enshrined in its familiar setting. The intercession of the Blessed Virgin Mary and the saints is not minimised.

The Missale Romanum of 1965 could have — and should have — served the Church well for generations. Instead, a mere four years later, it was cast aside and replaced a whole new Order of Mass fabricated with bits and pieces of the the Old, but having no claim to organic continuity with the historic Roman Rite.  Thus was Jesuit Father Joseph Gelineau, the apostle of popularized psalmody and an eminent member of the Consilium, able to write his chilling indictment:

Let it be candidly said: the Roman Rite which we have known hitherto no longer exists. It is destroyed.

This was not what the Fathers of the Second Vatican Council intended. It is, in fact, a betrayal of the vision expressed in Sacrosanctum Concilium.

There must be no innovations unless the good of the Church genuinely and certainly requires them; and care must be taken that any new forms adopted should in some way grow organically from forms already existing (Sacrosanctum Concilium, article 23).

My Own Law of Liturgical Evolution

No one at the grassroots level was prepared to deal with the multiplicity of options set out in the Missale Romanum of 1969. Very few of the clergy, long accustomed to a dry rubricism with little mystagogical catechesis, could manoeuvre their way through the options of the Novus Ordo Missae intelligently.  It was a blueprint for liturgical chaos. The Introductory Rites alone presented a bewildering array of options.  Reading article 48 of the Institutio Generalis Missalis Romani one discovers, for example, that there are four or, some would say, five options for the Introit alone. There are, moreover, six different ways of executing the four or five options. In the end, concretely, what happened in the vast majority of parishes?  The Introit disappeared altogether, and so too have the other elements of the Proper of the Mass. I am no Professor Anton Baumstark, but I have formulated my own law of degenerative liturgical evolution. It is this: elements of the rite tend to be neglected and, in the end, disappear altogether, in direct proportion to the number of options by virtue of which they may be replaced or modified.

In counting the sum total options set forth in the third typical edition of the reformed Missale Romanum, I arrive at forty odd variants subject to the choice of the celebrant, not counting the four Eucharistic Prayers in the body of the volume and, in the Appendix to the Order of the Mass, the two Eucharistic Prayers for Reconciliation and the four Eucharistic Prayers for use in Masses for Various Needs. In the Ordinary of the Mass alone, therefore, there are in excess of fifty variants and options left to the choice of the celebrant. I do not speak here of the Prefaces, given that they merit and require being considered separately.

In effect, the Ordo Missae of 1969 as amended in subsequent editiones typicae, is a — pardon the expression, I intend no irreverence — “Build Your Own Mass Kit”. It presents a kind of modular liturgy; the various modules can be added, taken away, or embellished according to the individual celebrant’s competence and subjective inspiration. In the most gifted hands, this does happen with the occasional felicitous result but, more often than not, celebrants fall back into a routine determined by the gravitational pull towards minimalism. Consider, for example, the simple fact that the single most widely used Eucharistic Prayer in English–speaking countries is the prex brevissima, Eucharistic Prayer II.  Dare I formulate yet another law of degenerative liturgical evolution? The gravitational pull towards liturgical minimalism tends to increase in direct proportion to the number of options left to the choice of the celebrant.