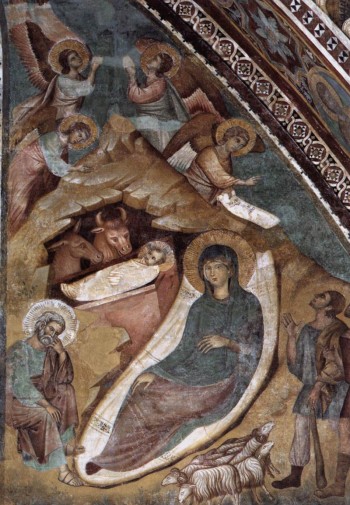 This has been, thus far, a Christmas unlike any other. We are, all of us, I think, so conditioned from childhood to have unrealistic emotional expectations of Christmas that, inevitably, the actual experience of Christmas, especially as one grows older, fails to measure up to those expectations, leaving a vague (or not so vague) feeling of disappointment. In a monastery one can cling to one’s unrealistic expectations of what the celebration of Christmas ought to be liturgically. One has a certain idea of just how flawless and enchanting Vespers, and Matins, and Midnight Mass, and Lauds, and the Day Mass, and all the rest ought to be. Of course, things are never as they ought to be, especially in the mind of one who tends to a certain liturgical idealism.

This year at Silverstream we are affected by the cold. High winds blowing up from the Irish Sea and in from the northwest seem to penetrate every closed door and window, making whatever insulation there is ineffectual. One of the brethren, to our sorrow, is ill and was unable to come to choir for Matins, Midnight Mass, the Day Mass, or any of the Hours.  There was, however, a quiet mystic joy in bringing Our Lord to him in his cell at the Communion of the Mass, preceded by a brother bearing a lighted candle and ringing continuously a little bell. Lingering bronchial infections and colds made singing something of an ordeal. In the end we were content to recite the Propers and Ordinary of the Mass on one note, and to chant the Hours the same way. Anxiety about our financial resources cast a shadow over the last days of Advent, even as we renewed our confidence in good Saint Joseph, and begged him to provide for us as he did for the Virgin Mother and for the Child.

Saint Joseph did send generous friends — you know who you are, dear ones — who have warmed our hearts with their kindnesses. We were blessed with lovely red and white roses for the altar, with a bountiful Christmas dinner, and with spectacular food hampers, tangible signs of God’s munificent providence. Heartfelt thanks to our neighbours and friends!

The Child and the Host

It seems, nonetheless that, this year, the Child of Bethlehem chose to offer us the gift of a Christmas stripped of all romance. An austere Christmas is how I described it to the brethren in Chapter this morning. I could not help but relate the Child in the manger to the Host on the corporal. Something of the poverty, the bleakness, the hiddenness, and the silence of Bethlehem perdures in the mystery of the Sacred Host. As Benedictine Monks of Perpetual Adoration, this goes to the very heart of our vocation.  We are not just Benedictines; we are, by a wonderful and utterly gratuitous gift of God, Eucharistic Benedictines, that is, men called not only to tarry in adoration and reparation before the Sacred Host, but also men called to become like the Sacred Host, to become what we contemplate, to imitate what He shows us of Himself, hidden beneath the sacramental veils. The Host is fragile; so are we.  The Host is disarmingly humble; so would we be. The Host is the living icon of the poverty of God made man; so we would become poor with Him.  The Host is silent; so do we find ourselves cherishing silence over words. The Host is the sacrament of the Divine Hiddenness; so too must we choose hiddenness over ostentation, and obscurity over acclaim. The Host is obedient, remaining where it is placed, not moving of Itself or by Itself, but waiting to be moved; and that is, I think, the very form of our prayer.

December 31st will open the year of the 400th anniversary of the birth of Catherine de Bar, Mother Mectilde du Saint–Sacrement. We shall, in our own way, celebrate the Mectildian Year because God, for His own reasons and in His own time, has placed Mother Mectilde in our life and, through her, clarified our vocation in the Church. This is not at all what I expected when over forty years ago I began my own monastic journey. The Mectildian hermeneutic of Benedictine life is disconcerting, and stripped bare of much of what one may have led to believe Benedictine life to be. It is as surprising as Christmas at Silverstream this year. My joy remains: the joy of knowing that the surprises of God are not exhausted and that, infallibly and until the end, His grace will fall into the empty hands of those who wait upon Him.