Chapter LVIII.  Of the Discipline of Receiving Brethren into Religion 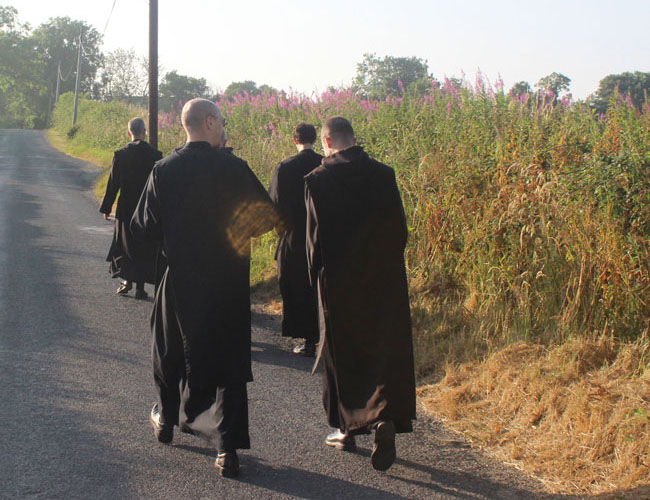 Afterwards let him go into the Novitiate, where he is to meditate and study, to take his meals and to sleep. Let a senior, one who is skilled in gaining souls, be appointed over him to watch him with the utmost care, and to see whether he is truly seeking God, and is fervent in the Work of God, in obedience and in humiliations. Let all the hard and rugged paths by which we walk towards God be set before him.

Fervent in the Work of God

Relatively few men arrive at the monastery with an experience and working knowledge of the Divine Office.  Some may have a passing familiarity with the psalms, but the others might be described, or so it seems to me, in terms of the five following pseudononymous thumbnail caricatures.

Jason was born and raised after the Second Vatican Council.  He knows little apart from the liturgy of his parish church with the peculiarities the Parish Priest has given it.  He says the rosary, and sometimes attends the Way of the Cross in Lent.  He has heard of the  Divine Office (or the Liturgy of the Hours) and appreciates the short morning and evening prayer found in the publication Magnificat.  Jason, if he is open and docile, will discover the treasures of the monastic Divine Office and, little by little, make it his own prayer.  He will come, over time, to experience the Opus Dei (Work of God) as the voice of Christ coming to flower on the lips of His members to praise and glorify the Father, with all the saints, in the Holy Spirit.  Jason’s zeal for the Work of God will translate, effectively, into a humble patience as he applies himself to learning the Latin of the psalms, the rules of Gregorian Chant, and the rubrics that govern the community’s liturgical prayer.

Frederick has embraced what he considers a traditionalist expression of Catholicism.  He participates regularly in the Holy Mass offered according to the Usus Antiquior.  He serves at the altar at his local Traditional Latin Mass chaplaincy, and attends Benediction of the Most Blessed Sacrament.  Frederick has a decent smattering of liturgical Latin and knows something of the breviary prayed by priests.  Frederick also has a fascination with rubrics and a lively curiosity pertaining to everything in the sacristy and the sanctuary.  A little knowledge, however, is a dangerous thing.  Frederick will need to admit that he doesn’t know everything.  He will need to mortify his penchant for criticizing rubrical minutiae and ceremonial niceties.  Like the Jason, if he is humble and docile, Frederick will discover the Opus Dei (Work of God) in all its grandeur, submit to its discipline, and make it his own prayer.  Frederick will arrive at a pure zeal for the Work of God by placing the accent on the interior life and by living every moment of the day in union with Christ, the great Adorer of the Father.  He will need to meditate often the word of Our Lord to the Samaritan woman at the well: “But the hour cometh, and now is, when the true adorers shall adore the Father in spirit and in truth. For the Father also seeketh such to adore him. God is a spirit; and they that adore him, must adore him in spirit and in truth”(John 4:23–24).

Felix was drawn to liturgical prayer already as a small boy.  At thirteen years of age he initiated himself into the recitation of the Little Office of the Blessed Virgin Mary; when he was eighteen he began praying the Roman Breviary, using the Baronius Press Latin—English edition.  Felix has a developed a genuine sensibility to the sacred liturgy.  He will need to submit humbly to learning the forms of the monastic Hours, and to deepening the theology they express and the piety they foster.  The Holy Spirit prepared Felix for the monastic life by implanting in his soul a taste for liturgical prayer.  He will need to cultivate, alongside his zeal for the Divine Office, an equally zealous devotion for lectio divina.  He will find in adoration of the Most Blessed Sacrament the continuation of the liturgical sacrifice of praise in a humble, silent, adhesion to the unceasing prayer of Christ to the Father.

Harry’s piety was shaped and coloured by the so–called Charismatic Renewal.  He is most at home in spontaneous outpourings of the heart and values them more highly than liturgical prayer.  Harry’s prayer has the strong emotional and sentimental component that one finds among Protestant Evangelicals.  His approach to Sacred Scripture is very personal, having little or no reference to the cycles of the liturgical calendar.  Harry has difficulty entering into the rhythm and stability of the choral Office.  It seems to him stilted and onerous.  On the other hand, he is capable of spending time in adoration before the Blessed Sacrament.  Does Harry have a Benedictine vocation?  Time will tell.  If Harry continues to hanker after the kind of prayer he knew and appreciated in the world, and develops no real taste for liturgical prayer, it is unlikely that he is called to Benedictine life.

Finally, there is Gilbert. Gilbert had a personal conversion experience at Millwater., a place associated with alleged apparitions.  Since that time, he has returned there on pilgrimage several times.  He now identifies his faith with Millwater and with the practices and devotions associated with it.  Gilbert cannot conceive of Catholicism without Millwater.  Gilbert’s piety has been further complicated by a growing fascination with every manner of apparition and private revelation.  The liturgy holds little interest for him, but he is a fervent follower of various locutionists, stigmatics, faith–healers, and so–called prophets. Gilbert hangs on the latest utterances of his preferred visionaries and sees current events largely in terms of conspiracies and apocalyptic signs.  Gilbert needs  to re–integrate normal Catholicism, and live in holy freedom as a son of the Church, nourished by the Gospels, the Psalms, the Catechism, and the Magisterium.