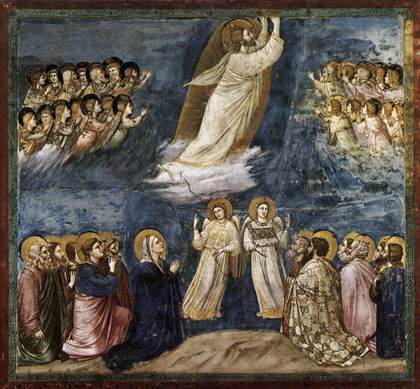 CHAPTER VIII. Of the Divine Office at Night

In winter time, that is, from the first of November until Easter, the brethren shall rise at what may be reasonably calculated to be the eighth hour of the night;* so that having rested till some time past midnight, they may rise having had their full sleep. And let the time that remains after the Night-Office be spent in study by those brethren who have still some part of the Psalter and lessons to learn. But from Easter to the first of November let the hour for the Night-Office be so arranged that, after a very short interval, during which the brethren may go out for the necessities of nature, Lauds, which are to be said at day-break, may follow without delay.

Having Inclined the Ear of the Heart
With the completion of Chapter VII, on the Twelve Degrees of Humility, the first section of the Holy Rule is brought to a close. The Prologue put us in mind of the Annunciation to the Blessed Virgin Mary; it was a pressing invitation to incline the ear of the heart to the Word in faith and in obedience.
Under a Rule and an Abbot
Chapters I, II, and III dealt with the organisation of the monastic family under the authority of its father, the Abbot, reminding us, in some way of the humble submission of Jesus to the authority of Saint Joseph and of the Virgin Mother in their hidden life at Nazareth. “And he went down with them, and came to Nazareth, and was subject to them” (Luke 2:51).
Using the Right Tools
Chapter IV presented us with the tools used in the workshop of the monastery, and in daily application to the hidden, interior life that so closely resembles that of the workman Jesus of Nazareth.
In Obedience, Silence, and Humility
Chapters V, VI,VII on obedience, silence, and humility, introduced us into the mystery of the Passion of Jesus, and into that of His real presence as the Christus Passus in the Most Holy Sacrament of the Altar. All that we contemplate in the suffering Christ, we can see also, with the eyes of faith, in the Most Holy Eucharist wherein His sacrifice is renewed, and all the states, moments, and virtues of His Passion remain actual and present.
Jesus Crucified and Eucharistic
Chapter VII culminates in the image of Jesus bowing His sacred head in death, and passing over to the Father: hostia pura, hostia sancta, hostia immaculata, that is, the pure victim, the holy victim, the immaculate victim offering Himself in sacrifice. Mother Mectilde’s little masterpiece Le véritable esprit (The True Spirit) is, in effect, a consideration of twenty-four “states of being” that she discovers in her contemplation of Our Lord, humble, hidden, silent, poor, and obedient in the Sacrament of His Love. Le véritable esprit is, in its own way, a kind of extended commentary on Chapters V, VI, and VII of the Holy Rule, and is best interpreted in that light. Mother Mectilde’s monastic doctrine is unique in that, of all the commentators of the Holy Rule, and among all the great Benedictine doctors, she alone presents the monastic life as a state of victimhood by way of configuration to the Lamb of God offered in the Holy Sacrifice of the Mass and abiding in the Most Holy Sacrament of the Altar.
Jesus Risen and Ascended
Chapter VIII, “On the Divine Office at Night” opens Saint Benedict’s grand liturgical directory: an ensemble of thirteen chapters (VIII–XX) that treat of the Opus Dei (the Work of God). It is as if, having shown us the Jesus in the hour of His death in Chapter VII, Saint Benedict would have us pass over with the risen and ascended Christ into the glorious mystery of His priesthood in heaven. “Therefore, if you be risen with Christ, seek the things that are above; where Christ is sitting at the right hand of God: Mind the things that are above, not the things that are upon the earth. For you are dead; and your life is hid with Christ in God” (Colossians 3:1-3).
A Good Night’s Sleep — and a Nap
After assuring that his monks will have eight hours of sleep (a little less in the short nights of summer, but made up by a good rest in the afternoon), Saint Benedict indicates that the Night Office (variously called Vigils, Matins, or Nocturns according to local usage) should begin straightway after rising. In Saint Benedict’s day, when the monks said Compline while there was still daylight, and went to bed before dark, the rising time would have been close to 2:00 a.m. At Silverstream Priory, where we go to bed at about 8:30 p.m., the rising time is at 4:30 a.m., and Matins begins shortly thereafter.
Study of the Psalms
Already in Chapter VIII, Saint Benedict concerns himself with the profitable use of the time between Vigils (or Matins, or Nocturns) and Lauds. He indicates that it ought to be used for the study of the Psalter and of the lessons read at the Divine Office from Sacred Scripture and from the Fathers. For a Benedictine monk, the study of the Psalter is a lifelong work. The psalms are an inexhaustible mine from which the monk learns to extract a precious gold. The psalms are a monk’s daily bread. They are to him, at the various seasons and hours of his life, like the sweetest honey, or like fresh clean water, or like an astringent vinegar, or even like the sands of the desert.
Psalm in the Mouth, Christ in the Heart
Saint Benedict’s monk (and, by extension, the Oblate) is bound to this lifelong, persevering study of the psalms. The psalms give us nothing less than the prayer of Christ to the Father, uttered in the grace and sweetness of the Holy Ghost. The psalms become a kind of holy communion with all the sentiments, desires, sufferings, joys, and glories of the Heart of Jesus. An old monastic adage says: Semper in ore psalmus; semper in corde Christus. The monk who, at every moment, has a psalm verse in his mouth will, at every moment, have Christ, and the very prayer of Christ, in his heart.