Skip to content
HomeRule of Saint BenedictAlways in the temple 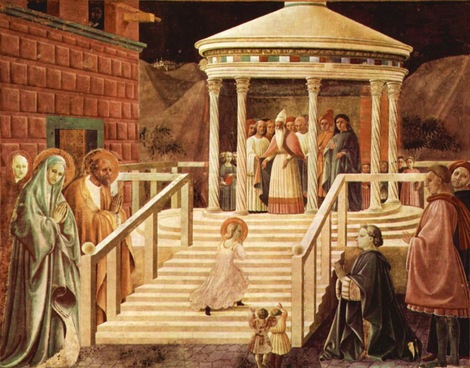 Paolo Uccelli’s Presentation of the Virgin Mary in the Temple illustrates a mystery that has long been interpreted as a paradigm of the monastic life. Little Mary hastens up the steps of the temple while her parents, Saints Joachim and Anna look on. The Child Mary will live hidden in the temple while the Holy Spirit prepares her to become the temple of the Word Incarnate.

Prologue of Our Most Holy Father Benedict to His Rule

Since then, brethren, we have asked of the Lord who is to inhabit His temple, we have heard His commands to those who are to dwell there and if we fulfil those duties, we shall be heirs of the kingdom of heaven. Our hearts, therefore, and our bodies must be made ready to fight under the holy obedience of His commands; and let us ask God to supply by the help of His grace what by nature is not possible to us. And if we would arrive at eternal life, escaping the pains of hell, then – while there is yet time, while we are still in the flesh, and are able to fulfil all these things by the light which is given us – we must hasten to do now what will profit us for all eternity.

How lovely are thy tabernacles, O Lord of host! My soul longeth and fainteth for the courts of the Lord. My heart and my flesh have rejoiced in the living God. For the sparrow hath found herself a house, and the turtle a nest for herself where she may lay her young ones: Thy altars, O Lord of hosts, my king and my God. Blessed are they that dwell in thy house, O Lord: they shall praise thee for ever and ever.

Saint Luke: Evangelist of the Temple
Saint Luke gives us two striking examples of permanence in the temple. The first is venerable old Anna, the daughter of Phanuel, which translates “face of God.” Concerning Anna of the Face of God, a prototype of the monastic life, Saint Luke says that she, “departed not from the temple, by fastings and prayers serving night and day” (Luke 2:37). The second is the very last sentence of his Gospel: “And they were always in the temple, praising and blessing God” (Luke 24:53).
To Abide in Christ
To abide in the temple is to abide in Christ, according to His own word in the Cenacle on the night before He suffered: “Abide in me, and I in you. As the branch cannot bear fruit of itself, unless it abide in the vine, so neither can you, unless you abide in me” (John 15:4). For Saint Benedict’s monk, this abiding in the temple, translates concretely into a love for stability in the enclosure of the monastery; into a permanent proximity to the altar, the place of the Holy Sacrifice and of the abiding real presence of Our Lord in the Sacrament of His Love. Saint Benedict himself chose to die in the oratory of his monastery at Monte Cassino, standing before the altar, in the presence of the adorable mysteries of Our Lord’s Body and Blood. Death is not improvised. Saint Benedict’s Eucharistic death was the seal placed on a wholly Eucharistic life.
The Constitutions of Silverstream Priory address this:

In the transitus [i.e. passing over] of Saint Benedict, who, as recounted by Saint Gregory the Great in the Second Book of the Dialogues, breathed forth his last before the altar, and entrusted the last beats of his heart to the Sacred Host, we recognize, as in a mysterious prophetic act, the generation, at the hour fixed by God, of sons of his Order, who would render to the Most Holy Sacrament adoration and reverence in the celebration of the Opus Dei, and in an uninterrupted vigil of love and reparation.

Moreover, in the decree by which His Lordship, the Bishop of Meath established our monastery, we read:

The real stability of a monk is both inward and ecclesial, insofar as it is fixed in the Sacred Host, that is, in Jesus Christ truly present as Priest and Victim upon the altars of the Church, whence He offers Himself to the Father as a pure oblation from the rising of the sun to its setting. Ubi Hostia, ibi Ecclesia.

The Passion of the Lamb
One who abides permanently in the temple of the Lord, in radical separation from the world, assumes certain obligations or, rather, responds to the grace of dwelling close to the altar of the Lamb, by imitating the Lamb in His silence, His sacrificial suffering, His humility, and His obedience unto death. With his heart and his body, the monk enters into the mystery of the Passion of the Lamb and into spiritual combat “not against flesh and blood; but against principalities and power, against the rulers of the world of this darkness, against the spirits of wickedness in the high places” (Ephesians 6:12).
Grace
Perseverance in this life of separation from the world and spiritual combat exceeds mere human strength. A monk who is trying to live his vocation without compromise will discover rather sooner than later that it is completely beyond what he is capable of doing. Confronted with his weakness and instability, he comes to understand the word of the Lord to His Apostles: “Without me you can do nothing” (John 15:5). At the same time he takes to heart the word of the Lord to Saint Paul: “My grace is sufficient for thee; for power is made perfect in infirmity” (2 Corinthians 12:9). God will, Saint Benedict assures us, “supply by the help of His grace what by nature is not possible to us.”
The Last Things
Life is short. Eternity is forever. Hell is a real possibility. Heaven is our true home. Saint Benedict would have his monk invest wisely every moment of this passing life, by spending it, and by spending himself close to the altar, in the temple of the Lord.