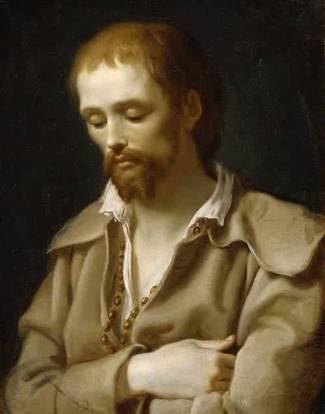 April 16th is the 86th birthday of dear Pope Benedict XVI. He has the same age as my own father, something that always made me feel especially close to him. Joseph Ratzinger was born on April 16, 1927. It was Holy Saturday. He was baptized on the same day. One-hundred-forty-four years earlier, on April 16, 1783 a poor man, who prayed always, died in Rome. His name: Benedict Joseph Labre. It is strange and wonderful that a man named Joseph, born on the feast of Saint Benedict Joseph, should take the name Benedict upon his election to the papacy. It is as if a providential indication of his destiny had been given from the beginning.

Saint Benedict Joseph Labre, born on March 26, 1748 in northern France, exemplifies a very particular kind of holiness found in both East and West. He was a wanderer who prayed ceaselessly, a pilgrim walking from one holy place to another, a fool for Christ.

As a young man, Benedict Joseph made a number of unsuccessful attempts at monastic life. He tried his vocation with the Trappists, with the Cistercians, and with the Carthusians, but, in every instance, after a few months or a few weeks, he was rejected as being unsuitable. Benedict Joseph was endearing in his own way. He was a gentle young man, tortured by scruples of conscience, and sensitive. He was completely honest, humble, candid, and open. He was cheerful. But, for all of that, he was a misfit. There was an oddness about him. He was drawn irresistibly to monastic life and, at the same time, rejected from every monastery in which he tried his vocation.

When he was twenty-two years old, Benedict Joseph left the Abbey of Sept-Fons, still wearing his Cistercian novice’s habit, with a rosary around his neck, and a knapsack on his back. His only possessions, apart from the clothes he wore, were his two precious rosaries, a New Testament, a Breviary for reciting the Divine Office, and The Imitation of Christ.

I have always found Benedict Joseph’s attachment to the Divine Office wonderfully compelling. Deprived of choir and choir-stall, of sonorous abbey bells calling to prayer at regular intervals, and of the support of chanting in unison with others, Saint Benedict Joseph carried the Hours into the highways and byways of Europe, into the shadows of the Roman Colosseum, into humble parish churches, and into the occasional barns where he rested upon the hay. His love for the Divine Office made him a worthy namesake of the great Patriarch who ordered, “that nothing be put before the Work of God.”

There was a similar love for the Divine Office among the joyful, homespun sort of folks who belonged to the forward-looking lay movements of the post-war period: The Catholic Worker, Madonna House, the Grail Girls, the Legion of Mary, and the leading people in the Catholic Rural Life Conference in the United States. The breviary, in one of the many attractive presentations available during that time, was deemed indispensable to a thriving Catholic life. I remember Adé Béthune telling me how she and her young friends, working as apprentices in the John Stevens stone carving business in Newport, Rhode Island, would interrupt their labours, morning and evening, to say Prime and Compline . . . in Latin! They were Benedictine Oblates.

Catholics of the pre-conciliar 1950s discovered the Divine Office and savoured it like a new wine, capable of rejoicing souls with a kind of sober inebriation in the Holy Spirit: Christ the Head praying in His members. The magnificent Collegeville Short Breviary,, complete with notes by Pius Parsch; The Little Breviary originally edited in The Netherlands; Frank Duff’s abridged Breviary for members of the Legion of Mary; and the Collegeville edition of Lauds, Vespers, and Compline were among the more popular editions in circulation.

I would guess that the inroads of the Charismatic Movement had something to do with the abandonment of the Divine Office among ordinary work-a-day Catholics. Later editions of the “Liturgy of the Hours” were poor in content and in presentation. They failed to enchant and captivate souls the way earlier editions of the Divine Office had. I rather suspect that if The Liturgical Press (Collegeville) were to re-issue the classic Short Breviary today, it would mark a renaissance of authentic liturgical prayer, but I digress. 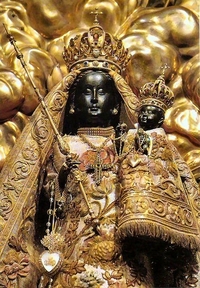 int Benedict Joseph visited the shrine of Our Lady of Einsieldeln in Switzerland.

Walking all the way to Rome, begging as he went, Saint Benedict Joseph became a vagabond bound to God alone, a pilgrim vowed to ceaseless prayer. He walked from one shrine to another, visiting the Holy House of Loreto, Assisi, Naples, and Bari in Italy. He made his way to Einsiedeln in Switzerland, to Paray-le-Monial in France, and to Compostela in Spain. Saint Benedict Joseph lived on whatever people would give him, and readily shared what little pittance he had. He observed silence, praying constantly. He was mocked, abused, and treated like a madman. Cruel children pelted him with garbage and stones.

After 1774, apart from an annual pilgrimage to the Madonna at the Holy House of Loreto, Benedict Joseph remained in the Eternal City. At night he would sleep in the Colosseum. During the day he would seek out those churches where the Forty Hours Devotion was being held, so as to be able to adore the Blessed Sacrament exposed. So striking was his love for the Blessed Sacrament that the Romans came to call him “the beggar of Perpetual Adoration.” He was graced with a profound recollection in church. More than once he was observed in ecstasy, ravished into the love of God and shining with an unearthly light. It was on one of these occasions that the artist Antonio Cavallucci painted the beautiful portrait of Saint Benedict Joseph that allows us, even today, to see his handsome face illumined by union with God.

The Death of a Saint

On April 16, 1783 Benedict Joseph collapsed on the steps of the Church of Santa Maria dei Monti. It was the Wednesday of Holy Week. He was carried to a neighbouring house where he received the last sacraments, and died. He was thirty-five years old. No sooner did news of his death reach the streets than a huge throng gathered crying, “È morto il santo! — The saint is dead!” Benedict Joseph was buried beneath the altar in a side chapel of Santa Maria dei Monti. I have gone there to pray, and knelt before the life-sized sculpture in marble that depicts him in the repose of a holy death.

Benedict Joseph Labre was dead but a few months when more than 136 miraculous healings were attributed to his intercession. Present in Rome at the time of his funeral was an American Protestant clergyman from Boston, The Reverend John Thayer. The experience of Benedict Joseph’s holy death converted Thayer. He was received into the Catholic Church, ordained to the priesthood, and died in Limerick, Ireland in 1815. This is the prayer to which The Reverend John Thayer attributed his conversion to Catholicism:

Almighty and eternal God, Father of mercy, Saviour of mankind, I humbly intreat thee by thy sovereign goodness, to enlighten my mind, and to touch my heart, that by true faith, hope and charity I may live and die in the true Religion of Jesus Christ. I am sure that as there is but one true God; so there can be but one faith, one religion, one way of salvation, and that every other way which is opposite to this, can only lead to endless misery. It is this faith, O my God, which I earnestly desire to embrace, in order to save my soul. I protest therefore before thy divine Majesty, and I declare by all thy divine attributes, that I will follow that Religion which thou shalt shew me to be true; and that I will abandon, at whatever cost, that in which I shall discover error and falsehood : I do not deserve, it is true, this favour on account of the greatness of my sins, for which I have a profound sorrow because they offend a God so good, so great, so holy and worthy of my love; but what I do not deserve, I hope ‘to obtain from thy infinite mercy, and I conjure thee to grant through the merits of the precious blood which was shed for us poor sinners by thy only begotten Son Jesus Christ. Amen.

Father John Thayer’s remarkable conversion and the witness of countless other miracles and graces attributed to Saint Benedict Joseph Labre, make me bold in presenting to him my own list of intentions and needs. And I invite you, dear reader, to add your intentions and needs to mine. I, first of all, recommend to the intercession of Saint Benedict Joseph, our beloved Holy Father emeritus, who bears both his names: Joseph Ratzinger, Pope Benedict XVI, eighty-six years ago today. I ask the powerful intercession of Saint Benedict Joseph for all who suffer from depression, anxiety, schizophrenia, and other forms of emotional and mental illness. I ask his intercession for a revival of liturgical prayer among ordinary Catholic laity, and for the world-wide extension of silent adoration of the Most Holy Sacrament of the Altar. I present to Saint Benedict Joseph Silverstream Priory. Were he to knock at our door, I would probably, after a few weeks or months, be obliged to suggest, as did so many others, that his place might be elsewhere. He would, however, take comfort, I think, as do I, in this excerpt from our Constitutions:

The real stability of the monk is both inward and ecclesial, insofar as it is fixed in the Sacred Host, that is, in Jesus Christ truly present as Priest and Victim upon the altars of the Church, whence He offers Himself to the Father as a pure oblation from the rising of the sun to its setting. Ubi Hostia, ibi Ecclesia.

Saint Benedict Joseph Labre, pray for us, that like you we may pass through this life as pilgrims, and as perpetual adorers, magnetized by the wondrous mystery of the Body and Blood of Our Lord Jesus Christ.