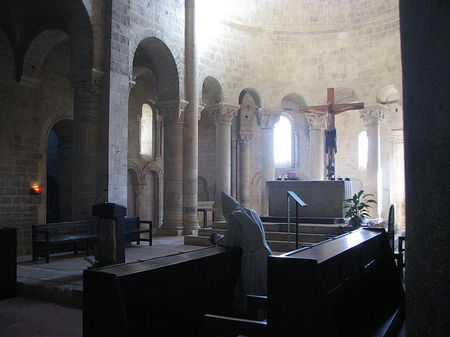 Silence?
Blessed John Paul II gave us one of his richest spiritual teachings in the Apostolic Letter Orientale Lumen (2 May 1995). The section on An Adoring Silence is particularly compelling. I have been thinking of this text again after having listened recently to several people (including priests) lament the loss of silence in their parish churches.

The Sign of Peace
With the “sign of peace” it became acceptable to exchange a few friendly words, and even a bit of news, at the most sacred part of the Mass: between the Consecration and the Communion. The few friendly words at the “sign of peace” were the thin end of the wedge. It was not long before people began whispering, and then talking, before, during, and after Holy Mass.

Salutation and Dismissal
The “sign of peace” is not the only place where clergy unwittingly inserted the thin end of the wedge. There was also the informal greeting by the priest at the beginning of Holy Mass, and the informal dismissal at the end, often including the quasi-obligatory, “Have a great day!” The characteristic sobriety of the Roman Rite — Dominus vobiscum for the salutation, and Ite, missa est for the dismissal — gave way to a style of discourse entirely coloured by the personality of the priest, sometimes seasoned with stage humour. Most of the Catholic faithful of the past few generations would still have been of the mind that “If Father talks and jokes in church, it must be alright now.” The informal dismissal is, in effect, an invitation to pursue conversation.

Hopes Disappointed
Many hoped that the new English translation of the Novus Ordo Missae would signal a recovery of the sacred and a return to the reverent sobriety of the Roman Rite. It seems not to have happened yet — at least, not in very many places.

A Lenten Resolution
Lent is a suitable time to set about recovering the discipline of a sacred silence in our churches. And to foster this “conversion of manners”, here is the relevant section of Blessed John Paul II’s Orientale Lumen:

The Most Holy Trinity
The Most Holy Trinity appears to us [then] as a community of love: to know such a God means to feel the urgent need for him to speak to the world, to communicate himself; and the history of salvation is nothing but the history of God’s love for the creature he has loved and chosen, wanting it to be “according to the icon of the Icon” – as the insight of the Eastern Fathers expresses it (34) – that is, molded in the image of the Image, which is the Son, brought to perfect communion by the sanctifier, the Spirit of love. Even when man sins, this God seeks him and loves him, so that the relationship may not be broken off and love may continue to flow. And God loves man in the mystery of the Son, who let himself be put to death on the Cross by a world that did not recognize him, but has been raised up again by the Father as an eternal guarantee that no one can destroy love, for anyone who shares in it is touched by God’s glory: it is this man transformed by love whom the disciples contemplated on Tabor, the man whom we are all called to be.

An Adoring Silence
16. Nevertheless this mystery is continuously veiled, enveloped in silence,(35) lest an idol be created in place of God. Only in a progressive purification of the knowledge of communion, will man and God meet and recognize in an eternal embrace their unending connaturality of love.

God’s Absolute Transcendence
Thus is born what is called the apophatism of the Christian East: the more man grows in the knowledge of God, the more he perceives him as an inaccessible mystery, whose essence cannot be grasped. This should not be confused with an obscure mysticism in which man loses himself in enigmatic, impersonal realities. On the contrary, the Christians of the East turn to God as Father, Son and Holy Spirit, living persons tenderly present, to whom they utter a solemn and humble, majestic and simple liturgical doxology. But they perceive that one draws close to this presence above all by letting oneself be taught an adoring silence, for at the culmination of the knowledge and experience of God is his absolute transcendence. This is reached through the prayerful assimilation of scripture and the liturgy more than by systematic meditation.

In the humble acceptance of the creature’s limits before the infinite transcendence of a God who never ceases to reveal himself as God – Love, the Father of our Lord Jesus Christ in the joy of the Holy Spirit, I see expressed the attitude of prayer and the theological method which the East prefers and continues to offer all believers in Christ.

A Silence that Allows the Other to Speak
We must confess that we all have need of this silence, filled with the presence of him who is adored: in theology, so as to exploit fully its own sapiential and spiritual soul; in prayer, so that we may never forget that seeing God means coming down the mountain with a face so radiant that we are obliged to cover it with a veil (cf. Ex 34:33), and that our gatherings may make room for God’s presence and avoid self – celebration; in preaching, so as not to delude ourselves that it is enough to heap word upon word to attract people to the experience of God; in commitment, so that we will refuse to be locked in a struggle without love and forgiveness. This is what man needs today; he is often unable to be silent for fear of meeting himself, of feeling the emptiness that asks itself about meaning; man who deafens himself with noise. All, believers and non – believers alike, need to learn a silence that allows the Other to speak when and how he wishes, and allows us to understand his words.