The AOH
The Ancient Order of Hibernians evolved from a need in the early 1600s to protect the lives of Catholic priests who, by offering the Holy Sacrifice of the Mass, risked death to keep the Holy Faith alive in occupied Ireland after the reign of England’s King Henry VIII. When England Implemented its dreaded Penal Laws in Ireland, various societies were formed across the country to assist Catholic priests in ministering to the spiritual needs of the faithful. These groups worked to aid and comfort the people by whatever means available. Similarly, the Ancient Order of Hibernians in America was founded on May 4th, 1836 at Saint James Church in New York City, to protect Catholic clergy and church property from the machinations of anti-Catholic bigotry, cloaked in the guise of American patriotism, and from the nativist prejudice against immigrants.
Homily at the Shrine of Our Lady of Knock
Pilgrimage of the Ancient Order of Hibernians
In Thanksgiving for the Gift of the Priesthood
Saturday, 13 October 2012
When John Byrne rang me a few days ago, inviting me to join you here in Knock today, I could not refuse him. Like my father and my great-grandfather before me, I am a member of the Ancient Order of Hibernians, Father McKeon Nº 7, in New Haven, Connecticut. More significantly, Our Lady of Knock herself has played a decisive role in my life since I first offered Holy Mass here, as a young priest from America over 25 years ago. 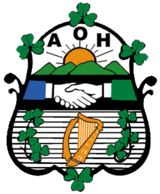 The Icon of Knock
Knock is a kind of life-size icon, that is to say, a message deployed in images. An icon is an image through which heavenly realities are made visible on earth, and through which we, pilgrims who go mourning and weeping in this vale of tears, are given a glimpse of the radiant joys of heaven.
To Be Read from Left to Right
Knock must be read, as one would read a text, from left to right, beginning with Saint Joseph. Consider well Saint Joseph — humble Joseph, silent Joseph, strong and brave Joseph — and in him you will see the model of the original mission of the Ancient Order of Hibernians, that is, the protection and safeguard of priests.
Saint Joseph, Protector of Christ, Lamb and Priest
To Saint Joseph was entrusted not only the tender Lamb born of the Virgin Mary, the Lamb who, upon the altar of the Cross, would become the pure victim, the holy victim, the spotless victim, but also the Eternal High Priest. The Epistle to the Hebrews (10:7) tells us that the priesthood of Christ began at the very instant of His conception, by the power of the Holy Ghost, in His Virgin Mother’s womb.
Priest From Conception
Coming into this world, that is, coming into the sanctuary of His Mother’s womb, the Son, the Eternal Word made flesh, presented Himself to the Father as Priest and Victim, saying, Ecce, venio, “A body Thou has fitted to me; behold, I come to do Thy will” (Hebrews 10:5-7). There was not a moment when Christ Jesus was not a Priest: the Priest for whom all the world waited in anticipation; the desire of the everlasting hills; the Mediator who would, by His own Body, as Saint Catherine of Siena says, bridge the great chasm between earth and heaven; the Redeemer who would give back to God what belonged to God, and give to men what God had, from all eternity, prepared for them.

Saint Joseph, Guardian of Priests
Jesus Christ, the Eternal High Priest, was placed, from the first instant of His conception, in the care and under the protection of Saint Joseph. Saint Joseph is the guardian of priests; he is the father of every man called to represent the fatherhood of God by being a living sacramental image of Him who said, “He that seeth Me seeth the Father” (John 14:9). Saint Joseph’s mission has not ended. It is, I daresay, more necessary today than in those dark hours long past of Ireland’s history, when the men of the Ancient Order of Hibernians took it upon themselves to be other Josephs for other priests in whom the one priesthood of Christ is prolonged through the ages, and will be prolonged until the end of time. Just as Saint Joseph cannot be understood apart from his relationship to Jesus, the Lamb of Sacrifice and the Priest who offers the Sacrifice, the Ancient Order of Hibernians cannot be understood apart from its historical relationship to the priesthood.
Mary, the Temple Fashioned by God for God
Here at Knock, Saint Joseph appeared bowing in reverence and in awe towards his Virgin Bride — the love of his life, the joy of his heart, the light of his eyes: Mary. Our Lady appeared at Knock as the image of the Ecclesia Orans, the Church-in-Prayer. The position of her hands, the raising of her eyes, her whole being is liturgical. Mary is the living sanctuary of adoration in spirit and in truth. Her body is the temple fashioned by God for God. Her Immaculate Heart is the altar of the perfect sacrifice. Her womb is the tabernacle of the living Bread come down from heaven. And through her eyes, as through the crystal of a monstrance, one can gaze into the Eucharistic Face of Jesus.
Contemplate Our Lady of Knock
Our Lady revealed herself here at Knock as she is, indeed as she stands near the priest at the altar so often as the Holy Sacrifice of the Mass is offered. Contemplate Our Lady of Knock, and you will understand what the Fathers of the Second Vatican Council meant when, fifty years ago, they summoned us to full, conscious, and actual participation in the Holy Mysteries. Our Lady of Knock is heaven’s perfect, shining illustration of what it means to assist at the Holy Sacrifice of the Mass on earth.
Saint John the Evangelist
After Saint Joseph and Our Lady, we come to Saint John, the disciple whom Jesus loved. Here at Knock, Saint John represents the preaching Church, the teaching Church. All that Saint John preached and taught, he drew out of the Heart of Jesus, that beating Heart upon which he rested his head at the Last Supper; the Heart he saw pierced by the soldier’s lance on Calvary; the Heart that he recognized in his vision on the island of Patmos in the wound of the immolated Lamb who lives forever.
The Grace of Johannization for Priests
If you would ask one grace for the priests of Ireland today, ask this — and I will allow myself to coin a word — ask that they may be entirely johannized by the Holy Ghost: that each priest may become for the Heart of Jesus and for the Heart of Mary another John, so as to be another John in the heart of the Church. Saint John represents the fulness of priestly holiness in intimacy with the Hearts of Jesus and Mary.
The Sacrifice of the Lamb Renewed
And finally, we come to the altar, to the Lamb, to the Cross, and to myriads of choirs of angels singing, “Holy, Holy Holy”; but now, what is represented at Knock in image and symbol, will be given to us in reality, for the source and the summit of Knock is the Holy Sacrifice of the Mass. It is time, then, to leave the ambo for the altar in the blessed company of Saint Joseph, Our Lady, and Saint John; time for the Sacrifice of the Lamb, to whom be all glory and praise here at Knock, and from the rising of the sun to its setting, and unto the ages of ages. Amen.