Skip to content
HomeMectilde de BarRenounce, adore, and submit to my designs

Paris, in 1651, was in turmoil. The famous battle of the Faubourg Saint-Antoine (July 2, 1652) led to the victory of the royalists over the princes and nobles, but then took a strange turn when the indomitable Grande Mademoiselle, had the gates of Paris opened to Condé’s army, and fired from the Bastille on those fighting on the side of Louis XIV. The poor Benedictines living in the “hospice” called Le Bon Ami (the former house of prostitution) in the faubourg Saint-Germain had started selling off their furniture and household effects in order to survive. They had not so much as a bale of hay on which to sleep, and practically nothing to eat. The future was very dim indeed.

Mother Mectilde was, at this time, thinking of withdrawing completely from what seemed to her an impossible situation. (Having lived through a number of impossible situations myself, I understand well her temptation to take flight.) She seriously considered exiling herself in the south of France to live as a hermit in the mountainous wilds of Sainte-Baume, the region that, according to tradition, was the place of Saint Mary Magdalene’s long solitary penitence.

A Word in the Night

On Easter night 1651, an interior voice spoke to Mother Mectilde, saying, “Renounce, adore, and submit to my designs”. In the grace of this word, she gave up her project of living as a hermit and, in pure faith, embraced the mysterious plan of God. 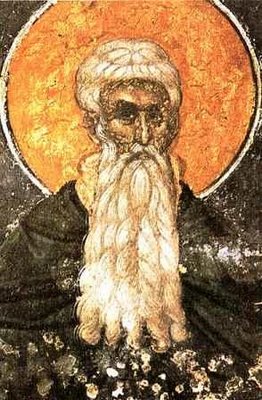 I cannot help but compare this word spoken to Mother Mectilde with a similar word given to Abba Arsenius: Fuge, tace, quiesce, “Flee, be silent, be at rest.” Mectilde is told to flee from her own projects, desires, and fears. She is told to adore God, perfect and loving in all His designs. Finally, she is told to submit, that is, to bow low beneath the Hand of God, cleaving to His Will with an unconditional and irrevocable “Yes”.

The three words that Mother Mectilde heard spoken in her soul contain all that is necessary for one to be happy in this life and in the next. Would that I had the wisdom to repeat them to myself every time I experience temptation, fear, disappointment, or darkness: “Renounce, adore, and submit.” These three words, in effect, go to the heart of what has been called the Mectildian-Benedictine charism. More on that later.

Give Us This Day Our Daily Bread

The day came when there was no bread in the house. With her community around her, Mother Mectilde knelt down to say the Our Father. An instant later, who should arrive at the house but Monsieur de Margeuil, physician to Mother Mectilde’s compatriot, the Duchess of Orléans, Margeurite de Lorraine. De Margueil, appalled by the destitute conditions he discovered, appealed to the Duchess of Lorraine for help. Without delay, a group of charitable noble ladies arrived in a flurry, bringing relief: the Marquise de Boves, the Marquise de Cessac, Madame Mangot, the Présidente de Hercé, and Marie de la Guesle, the Countess of Châteauvieux, who would become Mother Mectilde’s closest spiritual friend.

The indefectible friendship that grew up between the enclosed Benedictine and the grand lady of the world bore fruit in a remarkable correspondence. The Countess treasured Mectilde’s letters to her, and gathered them into a volume that she called her “breviary”. Happily, the so-called “breviary” of letters was copied, and has survived to the present. It represents, on the part of Mother Mectilde, a remarkably astute and demanding ministry of spiritual direction. The relationship between Mother Mectilde and Marie de la Guesle resembles, in many ways, that between Saint Teresa of Avila and her friend, the Duchess of Alba.

Father Bonnefonds, the Jesuit who had originally found the house at Saint-Maur-des-Fossés, took it upon himself to preach an eloquent appeal to benefit the Benedictines. As a result, he was able to present Mother Mectilde with a tidy sum. Then, the Bishop of Babylon, who lived quite nearby, spoke of the fledgling monastery to the parishioners of Saint-Sulpice, who responded generously to his request for help. With all of this, the financial situation of the monastery turned around, and its material future was assured.
To be continued.