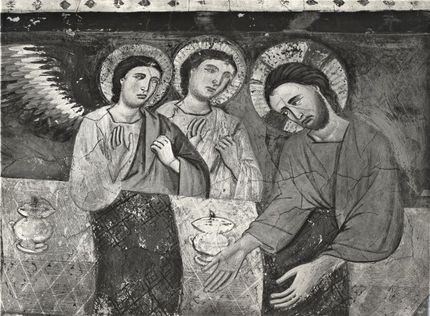 Images: details of an anonymous 13th century Italian fresco of the Transitus of Saint Benedict.

Charism
After the momentous ceremony of 12 March 1654, life in the newly established monastery in rue Férou began to unfold. Mother Mectilde insisted on what, today, we would call the specific charism of the foundation, that is, the graced identity by which a particular community fulfills its unique mission in the Church. For Mother Mectilde, this graced identity found expression in a continuous presence of adoration and reparation before the Most Holy Sacrament of the Altar. The foundress was well aware of the sacrileges and abominations perpetrated against Our Lord in the Sacrament of His Love. She knew of the diabolical machinations of people involved in superstition, witchcraft, and magic, and of Sacred Hosts stolen and exchanged among the perfidious adherents of secret societies and cults. She suffered whenever the Most Holy Sacrament was treated with irreverence, ingratitude, indifference, and scorn. She grieved when priests offered the Holy Sacrifice of the Mass hastily and unworthily, with scant fervour, attention, and devotion. She suffered the ignominy endured by Our Lord when He descended sacramentally into souls chilled and darkened by grave sin.

Self-Emptying
The new Institute was brought into existence to offer Our Lord, present in the Most Holy Sacrament of the Altar, souls that would enter into His own state of profound self-emptying (kenosis), souls that would enter into the humility, silence, obedience, and hiddenness of His sacramental state. The new Benedictines would draw this imitation of the Eucharistic Jesus, the Deus absconditus (hidden God), by persevering in an unbroken watch of adoration and reparation by abiding, by day and by night, before His Face, close to His Heart.

Christus Passus
One cannot abide for any length of time in faith, in hope, and in love, before the Most Blessed Sacrament without being drawn into the mysterious action of Jesus Christ, Priest and Victim, who in the stillness of the tabernacle, or from the centre of the monstrance, offers Himself to the Father with same dispositions that rose once from the altar of the Cross on Calvary. The Eucharistic Christ is, as I have had occasion to write before, the Christus passus: Christ in the very act of offering Himself to the Father; Christ, the pure victim, the holy victim, the spotless victim, so described in the Roman Canon.

Language of Symbols
Mectilde be Bar had an understanding of the language of symbols, not after the fashion of contemporary anthropologists, but rather as a daughter of Church immersed in sacred signs and rites of the liturgy. She made use of symbols — among them the lighted candle and the cord about the neck — to express outwardly the mystical realities that, by the grace of the Holy Spirit, she had apprehended inwardly. Even as such symbols give outward expression to what is essentially hidden, they engrave upon the souls of those who make use of them a vivid impression of what they signify. Fluency in this language of symbols has always been, and continues to be, integral to the pedagogy of monastic life.

Appeal to Souls
Mother Mectilde prescribed the hourly ringing of the bell five times as a way of recalling the community to mindfulness of the abiding presence of Our Lord in the Sacrament of His Love. The peal from the belfry was, in effect, an appeal to souls. She writes in her Constitutions:

To keep alive the memory of the inestimable benefit contained in the divine Eucharist, and to renew thanksgiving for it, one shall ring, at all the hours of the day and of the night, five strokes of the largest bell, whilst the one ringing as well as all those who hear it, say: Praised and adored forever be the Most Holy Sacrament of the Altar!

Perpetual Adoration
Hour after hour, a rota of adorers would assure a living, loving presence before the tabernacle. On Thursdays, the community would sing the Office and Mass of the Most Blessed Sacrament, and the Blessed Sacrament would be exposed in the monstrance from the end of Holy Mass until Compline, concluding with the amende honorable and Benediction.

Special Feasts
Certain days were to be solemnized, particularly Holy Thursday, Corpus Domini, the Thursday of Sexagesima (feast of The Great Reparation), and January 1st, the Circumcision, seen as the inauguration of the victimhood of Christ. A renewal of the vows of monastic profession marked the first day of the New Year.

Our Lady
The Blessed Virgin Mary, elected Abbess of the Institute on 22 August 1654, shared in every corporate action of the community’s life. In all the regular places of the monastery, the image of the Mother of God occupied the place of honour. The Most Holy Virgin, insisted Mother Mectilde, would keep the community faithful to its charism. The practice of perpetual adoration, being entrusted into Our Lady’s hands, would remain vigorous, stable, and permanent. After God, Mother Mectilde turned to the Blessed Virgin Mary to preserve the monastery from falling into laxity, and to the insidious compromises that would weaken or alter its mission. 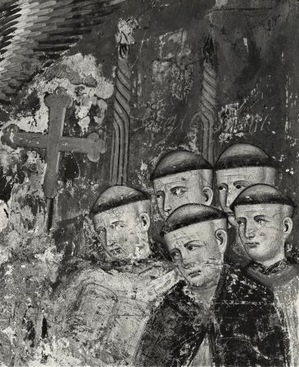 Saint Benedict and His Rule
As for the Benedictine identity of the new monastery, it rested upon the rigorous observance of the Holy Rule that Mother Mectilde had first learned at Rambervillers, a community marked by the reform of Dom Dider de la Cour (1550 – 1623), founder of the Congregation of Saint Vanne and Saint Hydulphe. In Paris, the proximity of the monks of the Congregation of Saint Maur at Saint-Germain-des-Prés assured the new monastery of adorers a stable point of reference within the Benedictine tradition.The Benedictine identity of the Institute derived, even more, from Mectilde’s mystical understanding of the death or transitus of the great Patriarch, as recounted by Pope Saint Gregory the Great in the Second Book of the Dialogues. Mother Mectilde writes:

Wanting to leave a testimony to the love that he nourished for the Most Holy Sacrament, [Saint Benedict] could not render It a greater honour, nor a more eloquent demonstration of his faith and of his charity, than by breathing his last in Its holy presence, and by entrusting the last beats of his heart to this adorable Host. . . so as to generate, in the time fixed by God, sons of his Order, who until the end of the world, would render to [the Most Holy Sacrament] adoration, reverence, and the witness of uninterrupted love and reparation. Do you not see, my sisters, that Saint Benedict died standing up, so as to make us understand that, in a supreme act of love, he “exhaled” the sacred Institute to which we are professed? He conceived it in the Eucharist, so that, nearly twelve centuries later, it would come to birth.