Skip to content
HomeMost Holy Sacrament of the AltarThank you, Father Blake 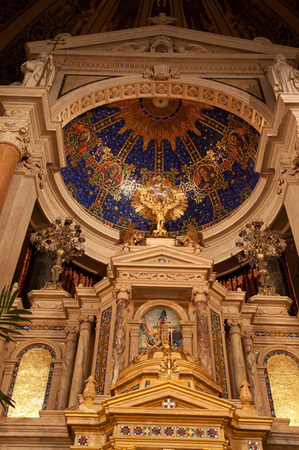 The Problem of Frequent Exposition of the Blessed Sacrament
Father Ray Blake, writing after a splendid experience of the Forty Hours Devotion in his Church of Saint Mary Magdalene, Brighton, says something that I have long wanted to say: “I am not in favour of frequent exposition”. One might wonder why I, of all people, would have a problem with frequent exposition. I am, after all, a monk professed with an explicit and solemn dedication to adoration of the Most Blessed Sacrament. First, read what Father Blake wrote:

. . . I am not in favour of the current trend for frequent Exposition, it seems to encourage a type of receptionism and undermine the fact that Lord is truly present and able to be adored when reserved in the tabernacle. I think there is a real danger in promoting a piety that says that he can only be adored or treated with reverence when he is exposed in the monstrance. In part I suspect this is result of the confusion after the Council about reservation in a side chapel. In many places diocesan bishops demanded the removal of the Blessed Sacrament to a side chapel, with the consequence that many even the basics of Eucharistic piety were not only lost but undermined.

Exposition and Benediction were traditionally high points, always involving putting out more candles, having servers, using incense, a priest wearing cope and for Benediction a humeral veil. The modern directory on Eucharistic Devotion seems to downplay all these, having no more candles than at Mass, for example, and often the exposing and reposing is done by an extraordinary minister of Holy Communion, with no priest present, and even if one is present it is often done without Benediction. The problem is making something which should be done with as much solemnity as possible worker-day and prosaic.

I do appreciate the intentions of those who try to encourage devotion to the Blessed Sacrament but starting with Exposition rather than the reception of Holy Communion and reverence to the reserved Blessed Sacrament seems to me a dangerous mistake.

Solemn and Festive
It should be noted that, until the post-conciliar chaos, exposition of the Most Blessed Sacrament in the monstrance was always considered a particularly solemn and festive occasion, a kind of condensed expression of the jubilant feast of Corpus Domini. Exposition called for an array of candles, flowers, incense, and sacred ministers. It was considered special, out of the ordinary, and the occasion of a lavish outpouring of graces for those who would come to adore.

Adoration Before the Closed Tabernacle
Perpetual adoration neither requires nor presupposes perpetual exposition. In fact, where there are no priests to expose the Most Blessed Sacrament, the faithful do well to adore, even perpetually, before the closed tabernacle, beseeching Our Lord to raise up a new generation of priests who will, humbly and gladly, expose the Sacred Body of Christ in the monstrance, and abide in the radiance of HIs Eucharistic Face.

In the Light of Recent History
Historically, even the first religious and monastic congregations vowed to perpetual adoration, practiced that adoration before the Blessed Sacrament concealed in the tabernacle. Such was — and remains today in most monasteries — the regular practise of the Benedictines of the Perpetual Adoration of the Most Holy Sacrament, founded by Mother Mectilde de Bar in 1653. Only on Thursdays, celebrated as a weekly Corpus Christi with the Votive Office and Mass of the Most Holy Eucharist, and on a certain number of greater feastdays in the year, was the Blessed Sacrament exposed in the monstrance.

The Fathers of the Congregation of the Sacred Hearts of Jesus and Mary of Perpetual Adoration of the Most Holy Sacrament of the Altar (Picpus Fathers), founded in 1800, adopted the same sobriety with regard to exposition; adoration was made, habitually, before the closed tabernacle, with reference to the humble, hidden life of Our Lord at Nazareth. 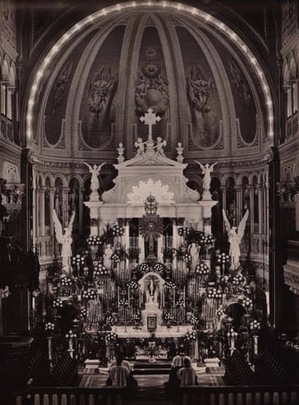 Only with Saint Peter Julian Eymard did prolonged, even perpetual, exposition become the normative practise, and this by the concession of a rare and precious privilege to the Congregation of the Most Blessed Sacrament. Exposition in the churches entrusted to the Blessed Sacrament Fathers was a lavish display of homage to the King of Kings, enthroned in the monstrance on an awe-inspiring and lofty throne.

The Loss of Awe
The multiplication of chapels of perpetual adoration — in themselves praiseworthy and holy endeavours — has led, in far too many places, to a loss of “Eucharistic amazement” and of awe in the presence of the Blessed Sacrament exposed. Exposition is taken for granted. Instead of a precious privilege calling for a sacrificial investment of our resources — lovely clean white altar linens, including a special corporal under the monstrance; the illumination of multiple burning candles (six, twelve, or fourteen!); flowers, the humble offering of the earth; incense, fragrant as it rises before the Most Holy — it has become banal. Often there are no more than two burning candles. Sadly, I have seen altars with no more than cheap paraffin votive lights burning in plastic jars. I have even seen exposition with no lighted candles, no flowers . . . and, worst of all, no one watching in adoration.

It must be said, straightway, that such negligence is not the result of economic penury. It is the result of the decline in reverence for the Most Blessed Sacrament that began over forty years ago, a decline manifested and precipitated by:

• the reduction of the Eucharistic Fast to the point of it becoming, in practise, non-existent;
• the demolition of the Communion rail and opening of the sanctuary to all and sundry;
• the celebration of the Holy Sacrifice facing the people;
• the introduction of Holy Communion in the hand;
• the most unfortunate and universally abused authorization for Extraordinary Ministers of Holy Communion;
• the disappearance of the genuflexion and of an “adoring silence” in church.

The promotion of perpetual adoration and of frequent exposition of the Most Blessed Sacrament must go hand-in-hand with an ongoing mystagogical catechesis on the Mystery of the Most Holy Eucharist and by:
• the retrieval of the Eucharistic Fast and frequent Confession;
• the reclaiming of the sanctuary for the priest and sacred ministers alone;
• the restoration of the Communion rail;
• the universal abrogation of Holy Communion in the hand;
• the abrogation of Extraordinary Ministers of Holy Communion in all but circumstances of extremely critical need, such as persecution, imprisonment, or the total lack of priests and deacons.
• the restoration of the genuflection and of an “adoring silence” in church.

At a Marian Shrine
While visiting an international Marian shrine a few years ago, I hastened to the “Adoration Chapel”, eager to spend some time before Our Lord’s Eucharistic Face. At the appointed hour, the sacristan, a layman, emerged from the sacristy in his work uniform, removed the Blessed Sacrament from the tabernacle and, rather unceremoniously, exposed It in the monstrance on the altar. This happened in a Marian shrine where there are a number of priests in service. What saddened me more than anything else was that a priestly service that is so sacred and exalted should be delegated to a layman employed in the sacristy.

A Solution?
Am I against exposition of the Most Blessed Sacrament? Not at all. Anyone who has heard me speak on the subject knows that I cherish it as an immense grace and privilege. I will not, however, defend or promote the practise of exposition at any cost. Liturgical minimalism is never a good thing. Minimal liturgical practise leads inexorably to minimal engagement with the Mystery of Faith. The whole question needs to be addressed by pastors of souls, for the glory of Our Lord who waits for us in the Sacrament of His Love, and for the spiritual good of those who come to adore Him.

Here at Silverstream Priory, under the vigilance of Our Lady of the Cenacle, we do indeed have prolonged exposition of the Most Blessed Sacrament every Thursday and on the greater liturgical feasts of Our Lord and His Most Holy Mother, making use of all the means at our disposal to express the reverence, jubilation, and love that so great a Mystery calls forth from our hearts.