Finally, after waiting more than two years, and having come to Ireland, we are on the point of acquiring this original painting of the Maternal Heart of Mary. It will be a joy to give it a worthy home in Silverstream Priory. It was commissioned by the Venerable Mother Mary Potter, and was executed by a street artist in Rome. It originally hung in the main hall of the Little Company of Mary’s house at Santo Stefano in Rome, and was subsequently sent to England where it was offered for sale.
There is evidence that in 1904, at the laying of the foundation stone of the Church of the Maternal Heart Mary and of Calvary Hospital in Rome, December 15th was kept as the Feast of the Maternal Heart of Mary.

The Maternal Heart of Mary

In his Marian Consecration of Priests at Fatima in May 2010, and again in Rome in June of the same year, Pope Benedict XVI chose to use, from among any number of expressions possible, that of the Maternal Heart. It was a remarkable English woman, the Venerable Mother Mary Potter (1847-1913), who, with energy and perseverance, devoted herself to promoting the title of the “Maternal Heart of Mary”

Mother Potter’s profound reverence for the priesthood, and her deep love of priests, are so well established that they require no elaboration. Suffice to say that she prayed earnestly for them, and did all she could to help them, no matter whether the individuals concerned had retained — or as happened in a few cases — lost their first fervour. (Patrick Dougherty, Mother Mary Potter, Sands & Co, London, 1961)

At the end of 1874, Mother Potter received the inner certitude that she and the religious Congregation she was to institute (The Little Company of Mary) were called to foster devotion to the Maternal Heart of Mary. “We are chosen,” wrote Mother Potter,

. . . to promulgate in God’s Church an increase of devotion to the Maternal Heart of Mary. We must increase our love for Our Lady and her sweet Maternal Heart, which makes us desire to propagate that devotion and to lead as many of God’s vast family as we can to love and honour that Heart.

For Mother Potter, the Maternal Heart of Mary was a way of life:

Love that Heart, consecrate yourself to it, and make it your constant endeavour to be actuated by all the holy desires, wishes, and prayers that emanated from it. Let your sufferings, your actions, your words, your whole being renew again, on this earth, the life of Mary. To do this you must study Mary; to study her you must enter her Heart and observe its workings.

Desirous of giving an iconographic expression to the Maternal Heart, Mother Potter directed that an existing statue of the Mother of God should be artistically adapted to this end by adding to it the image of a heart surmounted by the lily of Our Lady’s immaculate purity, and pierced by the sword of her sorrowful compassion on Mount Calvary. Later, in Rome, she commissioned at least two paintings representing the Maternal Heart of Mary. 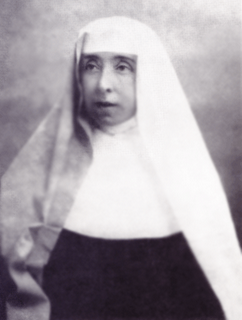 A Title Contested and Vindicated

The suitability of the title was the subject of some controversy, the principal objection being that it was novel, and that the Church had not recognized the Maternal Heart by authorizing its cultus in the liturgy. Opening her first house in Rome on 20 May 1884, Mother Potter succeeded in obtaining the blessing of Pope Leo XIII on its designation as the “Convent of the Maternal Heart of Mary.” In 1908, after building the heart-shaped chapel of Calvary Hospital (near the Church of Santo Stefano Rotondo) in Rome, Mother Potter was told by the Papal Master of Ceremonies, Msgr Carlo Respighi that it could not be dedicated under the title of the “Maternal Heart of Mary,” because no such title was in liturgical use. Mother Potter held her ground, and Msgr Respighi was obliged to seek the counsel of the Cardinal Vicar. Shortly thereafter, word reached Mother Potter that Pope Pius X had not only approved of the title “Maternal Heart,” but had further directed that a commemoration of the Maternal Heart should be made at every Mass during the octave of the new chapel’s dedication.

Consecration of the Church to the Maternal Heart of Mary

In July 1876, in obedience to Father Edward Selley, a convert from the Church of England, Mother Potter sought in fervent prayer an answer to her desire for a confirmation of her total consecration to the Maternal Heart of Mary. After making the Way of the Cross, and asking at each station for an answer to her prayer, Mother Potter received what, to my mind, must be taken as an inner locution on the part of Our Lady:

My child, God, Almighty though He be, after the possession of Himself, cannot give me anything more desirable, more precious, or dearer than souls. This Jesus knew; and at His death, wishing to leave me a measure of His Love, confided the Church in the person of Saint John to my Maternal protection.

Come, then, to me! I am your Mother! An earthly mother can forget her child and lack in pity for it, but your Heavenly Mother will protect you in your day of sorrow. Come, then, to me, and bring to me the Church, which I have borne in my womb from the very time that I bore its Author, Jesus. May the holy vicar of My Son proclaim from his cross that I am the Mother of this Church. May he unite himself with his Master in saying to the nations of the earth, ‘Behold your Mother,’ and consecrate the Church confided to him, to my Maternal Heart, and I will show myself a Mother.

Archbishop Kirby Enlisted in the Cause

A letter of Mother Potter, dated 17 September 1891 relates that she entrusted her spiritual director, Archbishop Tobias Kirby (1804-1895), Rector of the Irish College, with a letter to Pope Leo XIII in which she asked the Holy Father to consecrate the Church to the Maternal Heart of Mary. Five days later — was it by coincidence? — Pope Leo XIII addressed the following words to the universal Church in his Encyclical Letter Octobri Mense:

Mary is this glorious intermediary; she is the mighty Mother of the Almighty; but-what is still sweeter – she is gentle, extreme in tenderness, of a limitless loving-kindness. As such God gave her to us. Having chosen her for the Mother of His only begotten Son, He implanted in her a maternal heart that breathes nothing but pardon and love. Such Christ desired she should be, for He consented to be subject to Mary and to obey her as a son a mother. Such He proclaimed her from the cross when he entrusted to her care and love the whole of the race of man in the person of His disciple John. Such, finally, she proves herself by her courage in gathering in the heritage of the enormous labours of her Son, and in accepting the charge of her maternal duties towards us all.

The design of this most dear mercy, realised by God in Mary and confirmed by the testament of Christ, was comprehended at the beginning, and accepted with the utmost joy by the Holy Apostles and the earliest believers. It was the counsel and teaching of the venerable Fathers of the Church. All the nations of the Christian age received it with one mind; and even when literature and tradition are silent there is a voice that breaks from every Christian breast and speaks with all eloquence. No other reason is needed than that of a Divine faith which, by a powerful and most pleasant impulse, persuades us towards Mary.

On 5 July 1896, shortly before leaving Rome to visit her houses in England, Mother Potter was granted an audience with Pope Leo XIII. The Pope spoke to her of the Church’s troubles, asking for Mother Potter’s prayers and those of her daughters. Then, addressing Mother Potter, the Holy Father asked her if she thought the Church would rise triumphant over her persecutors and emerge from the problems which beset her. Mother Potter answered at once: “Yes, if the Church were consecrated to the Maternal Heart of Mary, she would show herself a Mother.” The Holy Father was silent. The Sister translating into Italian for Mother Potter led the Holy Father to believe that she was asking for a liturgical feast in honour of the Maternal Heart. Pope Leo XIII then directed her to make a written petition to this effect and to address it to the Sacred Congregation of Rites. This, of course, was not Mother Potter’s primary desire. Her intention was to ask the Holy Father to consecrate the Church to the Maternal Heart of Mary. Nonethless, she was obedient to the Holy Father’s directive, and wrote her request to the Sacred Congregation of Rites. She never received a reply. In fact, she later learned, that the matter was never even discussed!

Those who share the priesthood must be followers of that grand lover of Mary, Saint John. (Mother Mary Potter, 1876)