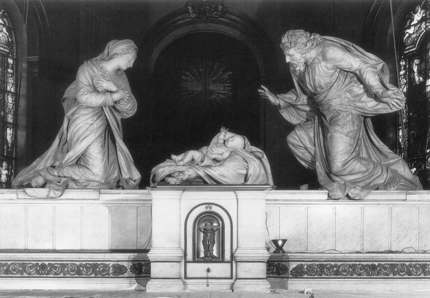 I read this text of Mother Mectilde de Bar (1614-1698) during my prayer this morning and knew that I had to translate it. She gave it as a Chapter conference on 17 December 1671. To illustrate the text, I chose the work of a contemporary of Mother Mectilde, the French sculptor Michel Anguier (1613-1686). The piece was originally executed for the altar of the church at Val de Grâce in Paris. Today it is in the Church of Saint-Roch just above the tabernacle. Mother Mectilde says it well: “Holy Communion is an extension of the Incarnation.” The electric vigil light next to the tabernacle is most unfortunate.

As for the text itself, it is representative of the French School with its interest in the perduring grace of the mysteries of Christ, something masterfully developed by Blessed Abbot Marmion in Christ in His Mysteries. At the same time, by reason of her insight into spiritual childhood and littleness, Mother Mectilde is a forerunner of Saint Thérèse of the Child Jesus and of the Holy Face.

It is true that the mystery is past, I recognize it, and that it happened only once, but the grace of the mystery is not, in fact, past for the souls who prepare themselves to give birth to Jesus Christ in their heart. He was born one time in Bethlehem, and he is born every day in us with Holy Communion, which, as the Fathers say, is an extension of the Incarnation.

Do you know why Our Lord did not want to be born in the city of Jerusalem? It is because there all was full of creatures; there was not a single empty house. All was full of business or something other. He preferred to be born in a poor stable, empty and abandoned. This demonstrates to us that, if we want Jesus to abide in us, we must empty ourselves of all things, withour exception. This being done, He will impress in us His spirit, His life, His inclinations, and in such a soul one will see only Jesus.

Those who have received this grace, will be recognized easily by their docility and simplicity, the companion virtues of holy childhood. Who are the first to come to the Infant Jesus to offer Him homage? Poor folk, shepherds. It is what the Gospel says: “Ye who are little, come unto Me.” Only the humble are worthy of learning secrets so divine, hidden from the great ones of the earth, who are precisely the proud. The more a soul is little, the more will God communicate Himself to her. He goes to seek her out in the depth of her nothingness, where He fills her with all Himself.