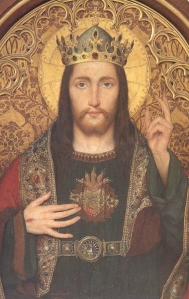 The Feast of Christ the King was instituted by Pope Pius XI in 1925. It was, then, completely unknown to Mother Mectilde de Bar in 17th century France. In preparation for the Feast of Christ the King, I translated part of a letter written by Mother Mectilde on the Vigil of the Ascension, 2 June 1666, to the community of Toul, France.
The Ascension — like the Epiphany earlier in the liturgical year — is the great festival of Christ, Lord and King that Mother Mectilde would have celebrated in choir, and pondered before the Blessed Sacrament.
This particular letter reveals Mectilde de Bar’s affectionate nature. She was quite willing to speak of the deep things of God to her spiritual daughters, and delighted in engaging them in conversation on the mysteries of divine love. The tone of this one letter speaks volumes about the social climate that prevailed in her monasteries. The love of God was the grand passion of these women. They were not afraid to speak, even in recreation, of the things that matter in life and in death.
For Mother Mectilde, the adventure surpassing all adventures was to forsake all things so as to find oneself with no-thing. He who clings to no-thing is ready to be taken up with Christ into the bosom of the Father, and to be hidden with Christ in the Sacrament of His Love. Here is the text:

My God, my dearest one and all, and more than dear to my heart, what tenderness I feel for all of you, and what ardour for your sanctification! Since the end of recreation on Sunday, I have a quantity of thoughts to communicate to you and precious truths to express to you; but I am sending them all back to the place whence they spring, so that Jesus Himself may imprint them in your inmost hearts, given that I can say to you nothing more, and the distance of places deprives me of the sweet consolation of exchanging with you on this mystery of love, of Jesus raised up even to the throne of His glory.
Pray Him, my daughters, that He might raise Himself up in us, and that He might raise us up even to Himself, that we might, once and for all, let go of the things of earth, that is, of ourselves and of creatures, so as to cleave wholly to Him.

Remember that “He took captives with Himself” (cf. Psalm 67:19). This concerns you, my dear ones: you are His victims, and consequently, His slaves, the captives of His divine love. He must then lead you away with Himself, so that henceforth you will be found no longer on earth. Non quae super terram (Colossians 3:2), but altogether hidden in Jesus in the bosom of the Father in the august Sacrament. There I will look for you always, and I don’t want to find you anywhere else. I entreat you to make your dwelling there, living separated, by your affections and your sensibility, from all the rest, so as to have nought and possess nothing outside of Him.