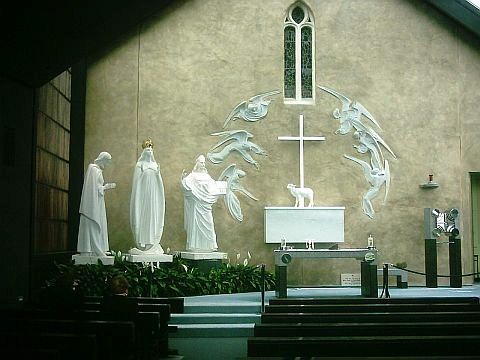 Grandma Tells Me About Knock
As a small boy, I heard many times about Knock from my Grandmother Margaret Gilbride Kirby (1900-1993). Her Aunt Mary had gone from Finisklin in the Parish of Kiltoghert, County Leitrim to Knock on pilgrimage. Aunt Mary sent my grandmother a little bottle of blessed water from the shrine. Grandma told me what she knew about the apparitions.

Pilgrimage in 1988
Years later, in 1988, I went to Knock together with my parents and my brother Terence. I had the privilege of celebrating Holy Mass on the site of the apparitions: the gable end of the parish church. Several other pilgrimages to Knock marked my life including one in the company of my cousin Mary Parady, and one with my dear friends John Flynn and Father Dan Leary. The grace of Knock clings to me.

Silence
The apparition at Knock is unusual in that the Blessed Virgin remained silent. She spoke no message and uttered no warning; she asked for nothing. Our Lady was silent and, at the same time, intensely present to the Immolated Lamb upon the altar, and to the people who watched the apparition. The silence of the Mother of God speaks to my own understanding of actuosa participatio (actual participation) in the Holy Sacrifice of the Mass. There is a silent inward cleaving to the Mystery of the Eucharist that precedes and perfects all other forms of participation in the Holy Sacrifice.

One draws close to this presence [of the Father, the Son, and the Holy Spirit] above all by letting oneself be taught an adoring silence, for at the culmination of the knowledge and experience of God is his absolute transcendence. This is reached through the prayerful assimilation of scripture and the liturgy more than by systematic meditation.

In the humble acceptance of the creature’s limits before the infinite transcendence of a God who never ceases to reveal himself as God – Love, the Father of our Lord Jesus Christ in the joy of the Holy Spirit, I see expressed the attitude of prayer and the theological method which the East prefers and continues to offer all believers in Christ.

We must confess that we all have need of this silence, filled with the presence of him who is adored: in theology, so as to exploit fully its own sapiential and spiritual soul; in prayer, so that we may never forget that seeing God means coming down the mountain with a face so radiant that we are obliged to cover it with a veil (cf. Ex 34:33), and that our gatherings may make room for God’s presence and avoid self – celebration; in preaching, so as not to delude ourselves that it is enough to heap word upon word to attract people to the experience of God; in commitment, so that we will refuse to be locked in a struggle without love and forgiveness.

This is what man needs today; he is often unable to be silent for fear of meeting himself, of feeling the emptiness that asks itself about meaning; man who deafens himself with noise. All, believers and non – believers alike, need to learn a silence that allows the Other to speak when and how he wishes, and allows us to understand his words.

Saint Joseph and Saint John
The presence at Knock of Saint Joseph and of Saint John the Evangelist is especially significant to me. They are the two men chosen by God to share most intimately in the life of the Blessed Virgin Mary. Saint Joseph obeyed the word of the Angel of the Lord: “Joseph, son of David, fear not to take unto thee Mary thy wife, for that which is conceived in her, is of the Holy Ghost” (Mt 1:20). Saint John, for his part, obeyed the word of the crucified Jesus: “Behold thy mother.” “And from that hour, the disciple took her to his own” (Jn 19:27).

In the last four mysteries, Saint John is present: 4) the Encounter of the Blessed Virgin with Jesus bearing His Cross, 5) the Death of Jesus on the Cross, 6) the Descent of the Body of Jesus from the Cross, 7) the Burial of Jesus. It is reasonable to assume that the Beloved Disciple accompanied the Blessed Virgin along the via crucis; he stood with her at the foot of the Cross, witnessed the removal of Jesus’ lifeless body from the Cross and His burial.