Skip to content
HomeSilverstream Priory, County MeathMonastery of Our Lady of the CenacleBecome like a consuming fire 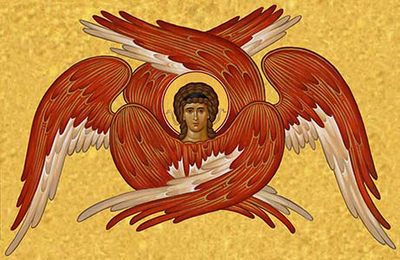 Yesterday, on the Friday of Passion Week and the Commemoration of Our Lady of Sorrows, I gave the monastic habit to Nicholas von Tersch, newly become Brother Seraphim Maria. I invite all the readers of Vultus Christi to pray for Brother Seraphim as he begins his monastic journey. Pray also for this little monastery that it may be all that Our Lord would have it be, nothing more and nothing less. Here is the exhortation I gave at the Clothing Ceremony:

EXHORTATION BY FATHER PRIOR
Dearly beloved son in Christ,
you have, over the past months and weeks,
listened to your Master’s precepts
and inclined the ear of your heart.
You have fixed your gaze upon the Eucharistic Face of Christ
and lingered in His company.
You have experienced, to a certain degree, the uncertainties and trials
of a monastery still in its infancy.
You have left parents, friends, and home
and, compelled by the love of Christ,
you have set about following the Son of Man
who has nowhere to lay His head.

Today, you are asking to enter the school of the Lord’s service established Saint Benedict.
In his school, while there is nothing harsh or burdensome;
there is a certain strictness of discipline
that the strong may still have something to long after,
and the weak may not draw back in alarm.
During this year of testing
you will listen to the reading of the Holy Rule
and to the teaching that I will seek to transmit to you.
If, after twelve months,
you are still resolved to be formed and transformed by this same Rule
by living in stability, conversion of life, and obedience,
according to the usages of this monastery,
you will enter upon an additional twelve months
in preparation for monastic profession
for a period of three years.

You know, dear Nicholas,
that His Excellency, Bishop Slattery authorized the foundation
of this new monastic family in the Diocese of Tulsa
in response to pressing needs of the Church and of her priests.
By seeking admission into this particular monastery,
you are embracing an ecclesial mission of
Eucharistic adoration for the sanctification of priests
and the spiritual renewal of the clergy in the whole Church;
of reparation for the sins that disfigure the Face of Christ the Priest;
and of the sacramental and spiritual support of the clergy
by means of monastic hospitality, spiritual direction, and retreats.

Live this first phase of your novitiate, then,
hidden like a leaven of holiness in the Church.
Keep burning continually the sweet-smelling incense of prayer.
Take up the sword of the Spirit.
Let your heart be an altar and, with full confidence in God,
present yourself as a victim for sacrifice.
In a few moments, I will wash your feet,
in imitation of the humble charity of the Servant Christ.
Thus, with your pilgrim feet cleansed and refreshed,
you will be able to walk in the footsteps of the Lamb
and follow Him wheresoever He goes.

You will receive the monastic tunic,
a sign of the holiness that is the vesture of all who have put on Christ.
You will be girt with a cincture of leather,
for the mortification of fleshly desires
and attachment to Him who, henceforth,
will draw you with leading-strings of love.
You will take upon your shoulders
the scapular that represents the sweet yoke of Christ.
Learn from Him, for He is gentle and humble of heart,
and you will find rest for your soul. 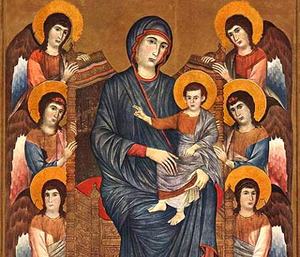 Finally, dear son, I will place you under the patronage
of the glorious Angelic Choir of the Seraphim:
incandescent beings, all of spiritual fire,
who burn like so many living flames of love

The prophet Isaiah described the Seraphim in a prophetic vision:

I saw the Lord seated on a high and lofty throne,
with the train of his garment filling the temple.
Seraphim were stationed above;
each of them had six wings:
with two they veiled their faces, with two they veiled their feet,
and with two they hovered aloft.
“Holy, holy, holy is the Lord of hosts!”
they cried one to the other.
“All his earth is filled with his glory!”
At the sound of the cry, the frame of the door shook
and the house was filled with smoke (Isaiah 6:2).

Isaiah reveals that the Seraphim are closest to the throne of God:
how fitting then is their patronage
for one who will burn in adoration, day after day,
before the throne of the Son of God
exposed to our gaze in the Sacrament of His Love.
The Seraphim contemplate God
in the richest way possible for a created being.
Their intellect is luminous and penetrating.
Their will is quick and strong.
Their love is a pure spiritual flame
rising bright in the presence of the Most High.

The Seraphim’s only task
is to worship God in perpetual adoration.
The Seraphim are all ablaze with an intense ardor of charity.
It is said that the charity of the Seraphim renders them incandescent.
There is, of course, a long tradition by which Saint Michael himself,
while an Archangel by virtue of his ministry,
belongs to the choir of the Seraphim by virtue of his being .
Remember always what Abba Joseph said to Abba Lot:
“You cannot be a monk unless you become like a consuming fire.”

I place you today, not only under the protection of the Seraphim,
but also under that of two soon to be “Blesseds”
and one saint of the Eastern Church.
On May 28th the Venerable Maria Serafina of the Sacred Heart,
foundress of the Sisters of the Angels, Adorers of the Most Holy Trinity,
who was born on September 11, 1849 and died on March 24, 1911,
will be beatified in Faicchio, Italy.
Mother Serafina’s life was marked by several beginnings,
and by a long search that took her, like a pilgrim, from place to place,
until at last the hand of the Father guided her
into the place He had prepared for her.

On June 26th, the Venerable Serafino Morrazone, priest,
who was born on February 1, 1747 and died on April 13, 1822,
will be beatified in Milan, Italy.
Don Serafino was another Curé of Ars.
As such, he is a model of priestly holiness
and a fitting patron for one called to represent all priests
before the Eucharistic Face of Jesus.
His Cause was introduced by the illustrious Benedictine,
Blessed Ildefonso Schuster.

Finally, I place you under the protection
of the venerable and God-loving Saint Seraphim of Sarov,
a monk-priest of the Russian Orthodox Church,
who was born on July 19, 1754.
He was 27 when he took his monastic vows in 1786,
receiving the name Seraphim, which, as you now know,
means “fiery” or “burning.”
He died while kneeling before an icon of the Mother of God
on January 14, 1833.
Known for his tender devotion to the Mother of God,
and to an Orthodox form of Our Lady’s Rosary,
Saint Seraphim said:
“Acquire a peaceful spirit, and around you thousands will be saved.”

To the name of Seraphim,
following the monastic tradition,
I add the Holy Name of the Blessed Virgin Mary
in its beautiful Latin form
that the Sacred Liturgy so often places upon our lips: Maria.
The Name of Mary will be a seal upon your heart.
It will be your consolation in times of trial,
sweetness in moments of bitterness,
strength in the hour of temptation.

The Holy Name of Mary is, in effect, a summary
of what it means to be a monk.
Maria, regula monachorum, said our Fathers.
In other words, if you would know what it means to be a monk,
you have only to contemplate Mary.
The names of Seraphim and Maria come together
in the mystery of the Cenacle:
there, on Pentecost morning,
the Holy Spirit descended in the form of tongues of fire
resting upon the heads of the Mother of God and the Apostles.
Thus was the Church set ablaze
to fill the world with Divine Fire and Light.

As you progress in the monastic life and in faith,
dear Brother Seraphim Maria,
your heart shall be enlarged,
and you shall run with unspeakable sweetness of love
in the way of God’s commandments.
In proportion to your surrender to Divine Love,
you will become seraphic,
that is to say, all ablaze with the fire of the Holy Spirit.

Dear son, may you persevere,
under the protection of the Immaculate Mother of God,
of the Angelic Choir of the Seraphim,
and of your patron saints,
in this first period of instruction and trial,
sharing by patience, obedience, and humility,
in the blessed Passion of our Lord Jesus Christ,
and so, at length, deserve to be a partaker also of His kingdom. Amen.