Skip to content
HomeMonasticMen Who Hold Their Gaze Directly Towards God 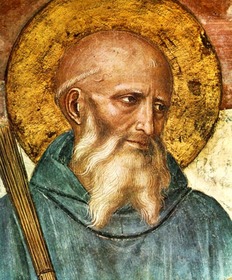 What the World Needs
On April 1, 2005, Joseph Cardinal Ratzinger gave a conference at Subiaco, the cradle of Benedictine life. Nineteen days later, as bishop of Rome, he assumed the name of Saint Benedict. Pope Benedict’s message at Subiaco identifies what the world needs above all else. “We need,” he said, “men who hold their gaze directly towards God.”
Vocation
Given that our monastery here in Tulsa professes a Benedictine life marked by the particular charism of adoration of the Eucharistic Face of Christ, these words of Pope Benedict XVI are, for me, very compelling. What does one do in Eucharistic adoration if not hold one’s gaze directly towards God? The other component of this particular charism is that if I seek to hold my gaze fixed on the Eucharistic Face of God, it is, first of all, for my brother priests, and especially for those whose gaze has, for one reason or another, been distracted — literally, pulled away from — the One Thing Necessary. This is where adoration and reparation meet.
With Unveiled Face
People are drawn to Saint Benedict because in him they see a man who “held his gaze directly towards God.” People are drawn to Benedictine monasteries because in them they expect to find men and women who “with unveiled face, beholding the glory of the Lord, are being changed into His likeness from one degree of glory to another” (2 Cor 3:18). People come to monasteries in search of a place where there is evidence of a divine inbreaking: traces of the Kingdom of Heaven, glimmers of the glory of God shining on the Face of Christ.
Those Who Seek God
More often than not the search for God begins with a search for those who seek God. It has always been thus in the life of the Church in both East and West. The faithful come to monasteries looking for fathers and mothers for their souls. People seek out monks and nuns hoping to see on their faces a reflection of the brightness of God. By virtue of monastic profession, we are called to hold our faces directly toward God. “For it is the God who said, ‘Let light shine out of darkness,’ who has shone in our hearts to give the light of the knowledge of the glory of God in the face of Christ” (2 Cor 4:6).