The feast of Saint Lutgarde, a Cistercian, and one of the first mystics of the Sacred Heart, occurs on June 16th. Some years ago I was given a piece of her wooden choirstall: one of my most treasured relics! 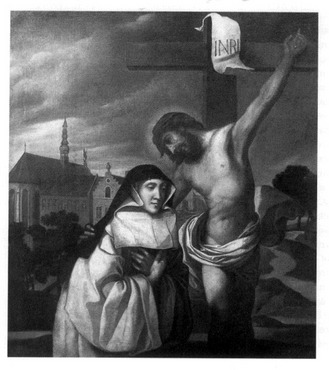 Wounded by Love
Saint Lutgarde was a contemporary of Saints Francis and Clare. She was born in 1182, just one year after the little Poor Man of Assisi. Both were destined to share in the Passion of Christ; both would bear the impression of Christ’s wounds. Saint Lutgarde is often depicted — as are both Saint Bernard and Saint Francis — held in the embrace of Jesus Crucified, and invited to drink from the wound in His Sacred Side.
Mother of Preachers
The prolific multiplication of Cistercian-Benedictine monasteries of women in the Low Countries obliged the White Nuns to turn to the newly founded friars, disciples of Francis and Dominic, rather than to their brother monks, for spiritual and sacramental assistance. Lutgarde was a friend and mother to the early Dominicans and Franciscans, supporting their preaching by her prayer and fasting, offering them hospitality, ever eager for news of their missions and spiritual conquests. Her first biographer relates that the friars named her mater praedicatorum, the mother of preachers.

Woman of the Church
Lutgarde is the classic example of “the enclosed nun with the unenclosed mind.” Her deep sense of the Church, her keen interest in the preaching mission of the mendicant friars, both Dominican and Franciscan, made her a greathearted woman, a woman of Catholic dimensions.
Prayer and Fasting
For Lutgarde, enclosure was no impediment to a real participation in the mission of preaching the Gospel. From within her monastery, she followed the friars in their travels, uniting her prayer and fasting to their apostolic labours. Lutgarde had a compelling insight into Jesus’ words to the apostles after their failure to deliver a boy from an unclean spirit: “This kind cannot be driven out by anything but prayer and fasting” (Mk 9:29). Her seven year fasts on bread and beer make her unique in the annals of holiness.
Reluctantly Cloistered
Lutgarde’s first attempt at monastic life was anything but fervent. She went to the monastery dragging her feet, more resigned to the cloistered life than committed to it. Her marriage dowry had been squandered in unwise business investments, making her unattractive to suitors, at least from the perspective of economic advantage. For Lutgarde, as for so many other women of her time, the cloister represented a socially acceptable alternative to the disgrace of unmarried life in the world. One could always play along with the monastic life if one didn’t want to live it, or so she thought.
Encounter in the Parlour
Lutgarde loved the parlour, a welcome break in the monotony of monastic observance. If her visitors were entertaining and handsome young men, susceptible to the feminine charms that, despite veil and grille, she knew well how to deploy, so much the better. Then everything changed. In a blaze of beauty and of love, Jesus Crucified, the Lord of glory, came to the parlour, revealing Himself to Lutgarde, claiming her heart for Himself, offering her a glimpse and foretaste of “what no eye has seen, nor ear heard, nor the heart of man conceived, what God has prepared for those who love Him” (1 Cor 2:9).

The only safe place in the monastic journey is the Face of Christ, the only stability that never disappoints is in His pierced Heart, the wellspring of undying, eternal, indestructible love.

Conversion
At the age of twenty, a changed Lutgarde embraced the monastic way, consciously, deliberately, generously. Psalm 26 expresses her experience: “Thou hast said, ‘Seek thou my Face.’ My heart says to Thee, ‘Thy Face, O Lord, do I seek’” (Ps 26:8). That one verse expresses the exchange underlying every call to intimacy with Christ. He says, “Seek thou my Face.” I respond, “Thy Face, O Lord, do I seek.” One who perseveres in seeking the Face of Christ is brought ineluctably to knowledge of the secrets of His Sacred Heart.
The Face and the Heart
The Face of Jesus Crucified, perceived in a shocking flash of beauty and of love, impressed Itself upon Lutgarde’s heart. She began to live “hidden in the secret of the Face of the Lord” (cf. Ps 30:21). Psalm 30 contains, in effect, two promises that have given hope to monastics down through the ages: “Thou shalt hide them in the secret of Thy Face. . . . Thou shalt protect them in Thy tabernacle” (Ps 30:21). For Lutgarde, it became clear that she was to live hidden in the Face of Christ and to lodge in the tabernacle of His pierced Heart.
Stability in the Sacred Heart
When Lutgarde’s sisters chose her as abbess, she was driven by the Spirit to seek a life even more hidden in the Face of Christ, to place her stability in His Sacred Heart. She sought admission to the abbey of Aywières where, laying aside the habit of the Black Nuns, she put on the white cowl of Cîteaux, happy to have found a deeper silence, a more hidden solitude . Lutgarde’s silence was virtually complete. The nuns of Aywières spoke French, not Lutgarde’s native Flemish. Despite her efforts, she found the French tongue impossible to master. Living, working, and praying in the midst of her sisters she experienced a loneliness and solitude that she had never known before.
Drawn to the Wound in His Side
Lutgarde’s health was poor. Fevers and poor eyesight, later turning to blindness, made the austere Cistercian observance wearisome and draining. The same Christ who had revealed Himself to her at the beginning of her conversion, waited for her one night in the dormitory, by the door to the staircase leading into the choir. Crucified and bleeding, His gaze met hers. Removing His right arm from the Cross, He drew her mouth to the wound in His side, the wound opened by the soldier’s lance on Calvary. Lutgarde drank, and drank deeply. The daily Eucharist renewed sacramentally her mystical experience of Christ’s pierced Heart. Like the children of Israel, she drank “from the supernatural rock” (1 Cor 10:4), but journeyed in the wilderness nonetheless.
The Mystical Exchange of Hearts
Long hours in choir did little to console her. Her Latin was on a par with her French. Lutgarde’s solitude was complete. The liturgical dialogue with God was as frustrating as dialogue with her sisters. When, in a mysterious visitation, Christ came to Lutgarde, offering her whatever gift of grace she should desire, she asked for the intelligence of the Latin tongue, that she might better understand the Word of God and lift her voice in choral praise. Christ granted her request but, after a few days, Lutgarde began to feel strangely restless, unsatisfied. She hungered for more than the enlightenment of the intelligence. Though Lutgarde’s mind was flooded with the riches of psalms, antiphons, readings and responsories, a painful emptiness, a persistent yearning, throbbed in her heart. With disarming candour she returned to Christ, asking to return His gift, and wondering if she might, just possibly, exchange it for another. “And for what would you exchange it?” Christ asked. “Lord, said Lutgarde, I would exchange it for your Heart.” Christ then reached into Lutgarde and, removing her heart, replaced it with His own, at the same time hiding her heart within His breast. “A new heart I will give you, and a new spirit I will put within you; and I will take out of your flesh the heart of stone and give you a heart of flesh” (Ez 36:26). This mystical exchange of hearts signified Lutgarde’s passage into spiritual maturity. The heart, created for love, is satisfied by love alone, a love beyond all understanding.
The Only Safe Place
The road of Lutgarde’s exodus, her particular monastic journey, had been one of loneliness and isolation, of frustration and disappointment until, having given her heart in exchange for the Heart of Christ, she was “filled with all the fullness of God” (Eph 3:19). Who among us can claim to know the gift that will bring peace, deliver from trouble, and satisfy the longings of the heart? Who among us would presume to know the grace of which he or she stands, at this very moment, most in need? I, for one, would fear to choose. The only safe place in the monastic journey is the Face of Christ, the only stability that never disappoints is in His pierced Heart, the wellspring of undying, eternal, indestructible love.
The Eucharistic Heart of Christ
The love of the pierced Heart of Christ is given us, freely and abundantly, in the mystery of the Most Holy Eucharist. The Eucharist is the exchange, or rather, the communion of hearts, the Heart of Christ in the Church, the heart of the Church in Christ. May the friendship of Saint Lutgarde and the energy of her prayer accompany us into the presence of Christ’s Eucharistic Heart, and remain with us amidst all of life’s changes, chances, and crossings.