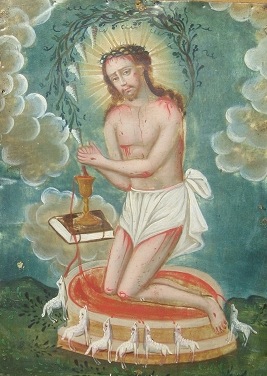 Preaching on the Psalms

The last time I had the privilege of preaching at these Sunday Vespers, I proposed that we meditate on Psalm 109, the glorious psalm of Our Lord’s divinity, of His kingship, and of His priesthood, the psalm that the Church places on our lips and in our hearts every Sunday evening, and on every great festival of the year. This evening, I propose that we consider together the second psalm of Vespers: Psalm 111.

Psalm 111 is a song about blessedness. It is, in its own way, a beatitude expanded. Like Psalm 1 at the head of the Psalter, Psalm 111 begins with the pregnant phrase: Beatus vir . . . Blessed is the man. Who, we must ask, is the man in question? This Man is none other than the One who called Himself “the Son of Man” (Jn 8:28). The Man in question is a true Man, born of the Virgin’s womb, and nailed in His flesh to the tree of the Cross. He is also true God, eternally begotten of the Father, the Son in whom the Father takes delight, the Son to whom the Father said in this evening’s first psalm, “Sit Thou on My right hand, until I make Thine enemies Thy footstool” (Ps 109:1).

Christ in the Psalms

Before trying to understand Psalm 111 as a program for moral integrity, as a guide to godly living, we are to see it, I would suggest, as a portrait, an icon, of Our Lord Jesus Christ. The entire Psalter is about Christ, and this from the first page to the last. One who scrutinizes the psalms with the eyes of faith begins to see between the lines. His gaze goes through the text to the mysterious presence that illuminates it and gives it life from within. The prayer of the psalms becomes a kind of spiritual communion with Jesus, the Beloved Son, with Jesus, the Eternal Priest, who, in the glory of heaven, engages in a ceaseless exchange with His Father. The Psalter is a sacrament crafted of human language that makes us partakers of a divine conversation. The Psalter opens our hearts to all that rises from the Heart of Jesus in the presence of His Father. The Psalter is a vessel of living water. One who prays the psalms drinks deeply of the Holy Spirit.

It is a tremendous revelation when one wakes up one fine day and realizes that the psalms are all about Christ, that the Psalter is a kind of tabernacle containing the Hidden Manna, and just waiting to be opened so that, from it, we might be fed with the living bread of the Word.

Blessed is the man who fears the Lord,
who greatly delights in His commands (Ps 111:1).

The fear of the Lord is the reverence of the Son who prays facing His Father. Thus do we read in the Letter to the Hebrews that, “in the days of His flesh, Jesus offered up prayers and supplications with loud cries and tears, to Him who was able to save Him from death, and He was heard for His godly fear” (Heb 5:7). The Church, by binding her bishops and priests and deacons to the daily prayer of the psalms, enrolls them in a school of reverence. By praying through Christ, with Christ, and in Christ, one enters into the dispositions of His Heart, one begins to grasp something of the reverence that imbued His whole being so often as He pronounced the name “Father.”

The Son greatly delights in the commands of the Father. This is the whole message of the Fourth Gospel. “My food,” says Jesus, “is to do the will of Him who sent Me, and to accomplish His work” (Jn 4:34). “For I have come down from heaven, not to do My own will, but the will of Him who sent Me” (Jn 6:38). “I do as the Father has commanded Me, so that the world may know that I love the Father” (Jn 14:31). The Psalter is not only a school of reverence; it is a school of obedience. In it we learn not the mercenary obedience of the hired-hand, no the servile obedience of the slave, but rather the loving obedience of the Son who says, “He who sent Me is with Me; He has not left Me alone, for I do always what is pleasing to Him” (Jn 8:29).

His descendents will be mighty in the land;
the generation of the upright will be blessed.
Wealth and riches are in his house;
and his righteousness endures forever (Ps 111:2-3).

Who, you may ask, are the descendents of Christ? Saint John explains: “But to all who received Him, who believed in His name, He gave the power to become children of God; who were born, not of blood, nor of the will of the flesh, nor of the will of man, but of God” (Jn 1:12-13). Christ is the New Adam, “full of grace and truth,” “and from His fullness have we all received, grace upon grace” (Jn 1:16).

David prophesies concerning the wealth and riches that are in His house, and what are these if not what Saint Paul reveals when he says, “To me, though I am the very least of all the saints, this grace was given, to preach to the Gentiles the unsearchable riches of Christ, and to make all men see what is the plan of the mystery hidden for ages in God who created all things” (Eph 3:8-9). These “unsearchable” riches are “the inheritance of the saints in light” (Col 1:12), “the wealth and riches” (Ps 111:2) that are stored up for us in, and dispensed to us from, the household of Christ that is the Church.

Light rises in the darkness for the upright;
the Lord is gracious, and merciful, and righteous (Ps 111:4).

Today, in the Church’s traditional calendar is Septuagesima Sunday. Pope Saint Gregory the Great, inspired and spurred by the edifying example of the Greeks living in Rome, who kept a pre-Lenten season, decided that the Latins should do no less. And so, he instituted a three week preparation for Lent, roughly corresponding to the Sundays that mark the seventieth, sixtieth, and fiftieth days before Easter. The season of Septuagesima is one of those precious elements of our Catholic tradition that belong to the period of the undivided Church, to the first thousand years of Christianity. It is one of the liturgical practices that we hold in common with the Orthodox Churches of the East and, as such, merits high consideration and dutiful observance. One of the aims of Pope Benedict XVI is to invite the whole Church of the Latin Rite to draw freely from her own liturgical inheritance in such a way as to close the false gap in continuity that some wrongly believe was opened by the Second Vatican Council.

All of that is a round about way of saying that the “light rising in the darkness” of Psalm 111 is the Lumen Christi of the Paschal Vigil. In seventy days time, this cathedral will be all in darkness and as a flickering flame pierces the shadows of the night, the deacon’s voice will announce the fulfillment of what this evening’s second psalm prophesies: “Light rises in the darkness for the upright; the Lord is gracious, merciful, and righteous” (Ps 111:4).

It is well with the man who deals generously and lends,
who conducts his affairs with justice;
For the righteous will never be moved;
he will be remembered forever (Ps 111:5-6)

The next two verses of Psalm 111 point to the generosity of Christ. Who gives with open hand to the poor, if not Our Lord Jesus Christ? And what does He give?

He is not afraid of evil tidings;
his heart is firm, trusting in the LORD.
His heart is steady, he will not be afraid,
until he sees his desire on his adversaries (Ps 111:7-8).

The final portion of Psalm 111 reveals to us the brave and generous Heart of Christ. Anointed by the Holy Spirit, Our Lord went into His Passion as a fearless warrior into battle. The anguish of Gethsemani was not a prelude to the battle; it was, I would venture to say, its cruelest hour. It was before going across the Kedron Valley to the Garden of Olives that Jesus said, “I do as the Father has commanded Me, so that the world may know that I love the Father. Rise, let us go hence” (Jn 14:31). Thus did “death and life contend in the combat stupendous.” Thus did “the Prince of Life reign immortal,” “conquering by death by death.”

He has distributed freely, he has given to the poor;
his righteousness endures for ever;
his horn is exalted in honor (Ps 111:9).

This verse is nothing less than a prophecy of the Resurrection and Ascension of the Lord. “Therefore it is said, ‘When He ascended on high, He led a host of captives, and He gave gifts to men'” (Eph 4:8). “Therefore God has highly exalted Him and bestowed on Him the name that is above every name, that at the name of Jesus every knee should bow in heaven, on earth, and under the earth, and every tongue confess that Jesus Christ is Lord, to the glory of God the Father” (Phil 2:9-11).

The wicked man sees it and is angry;
he gnashes his teeth and melts away;
the desire of the wicked man comes to nought (Ps 111:10).

The remainder of the psalm deals not with The Blessed Man, but with The Wicked Man, the one about whom Jesus says, “He was a murderer from the beginning, and has nothing to do with the truth, because there is no truth in him” (Jn 8:44). The very last line of Psalm 111 is wondrously comforting: “the desire of the wicked man comes to nought” (Ps 111:10).

Psalm 111 gives us, then, reason to rejoice in hope as we make our way toward the Light that rises in the darkness. We can enter this pre-Lenten season, and Lent itself, fully confident in the prayer, and in the strength, and mercy, and triumph of the Blessed One in whom we are all blessed: Our Lord Jesus Christ to whom be all glory and praise now and always and unto the ages of ages.