Skip to content
HomeYear of the Priest 2009–2010The Triduum: Evening III 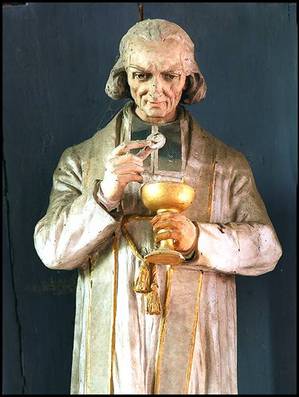 I came in from the cathedral a short while ago. The third and last evening of the Triduum was very well attended. His Excellency, Bishop Slattery presided from the throne and went to the altar to give Benediction of the Most Blessed Sacrament. The veneration of the first class relic of Saint John Mary was very touching. Folks of all ages, including wide-eyed little children, came forward to kiss a humble fragment of the saint’s mortal body and to ask for his intercession. I was especially gratified to see a number of our seminarians there this evening. Heartfelt thanks to all who joined in the Triduum from their homes!

Love Crucified Here and Now
I left off last evening by quoting Saint John Mary Vianney on the Mass. “”What a good thing it is,” he said, “for a priest each morning to offer himself in sacrifice.” Saint John Mary Vianney’s identification with Love Crucified was so complete that his only glory was in the Cross of our Lord Jesus Christ, not in a remote Cross, not in the mere symbol of a sacrifice that happened in a place far away and long ago, but in the Cross made present, actualized, brought out of the historical “there and then” of another place and time, into the immediacy of the real “here and now,” and this by the miracle of the Holy Sacrifice of the Mass.

Into the Hands of the Living God
When the parish priest of Ars ascended the steps of the altar in his village church, it was to say “Yes” to all the exigencies of Redeeming Love. It is a terrifying and risky thing for a priest to ascend to the altar . . . to the place of sacrifice, morning after morning. He does so with the words of Jesus crucified on his lips, “Father, into Thy hands I commit my spirit” (Lk 23:46), not forgetting for a single moment what is written in the Epistle to the Hebrews: “It is a fearful thing to fall into the hands of the living God” (Heb 10:1).

From the Altar to the Confessional
It is this identification with Love Crucified and with the sin of the world that compels the priest to go from the altar to the confessional. One might say that the priest who consents, day after day, to the mystical crucifixion of the Mass — and mystical does not mean spooky; it means hidden — will be driven by the Holy Spirit into the confessional. Altar and confessional are but two faces of a single mystery: what sin does to Love, and what Love does to sin.

The Horror of Sin
In his letter for the Year of the Priesthood, Pope Benedict XVI says that “this deep personal identification with the Sacrifice of the Cross led Saint John Mary Vianney — by a sole inward movement — from the altar to the confessional.” The Holy Father goes on to say that, “Priests ought never to be resigned to empty confessionals or the apparent indifference of the faithful to this sacrament.” “In France,” he says, “at the time of the Curé of Ars, confession was no more easy or frequent than in our own day, since the upheaval of the revolution had long inhibited the practice of religion.” Saint John Mary Vianney lived in the wake of the bloody French Revolution (1789-1799); we live in the wake of the sexual revolution, and in the throes of a cultural revolution that has spawned and abetted the undoing of Christian principles in every area of life. In both cases, the revolutionary animus has blunted our awareness of the horror of sin as an offense against God, and led to a disaffection for the Sacrament of Penance.

The Return to the Confessional
At the same time, changes in liturgical and pastoral practice, such as the introduction of the Saturday Vigil Mass, displaced or reduced the weekly availability of priests for confessions. In most places, there was little critical reflection on the long-term consequences of this displacement, and only minimal efforts at making the Sacrament of Penance readily available at other times. At no other time in the history of the Church hav we seen such long lines for Holy Communion, and such short ones for Confession. One of the aims of this Year of the Priesthood is the return of both priests and people to the confessional. The Babylonian Exile of confessors and penitents is over! Confession is back! The confessional cannot be separated from the altar any more than sin can be separated from the blood-soaked Cross on Calvary.

A Virtuous Circle
It is this “virtuous circle” going from the altar to the confessional, and from the confessional to the altar, that the Holy Spirit wants to regenerate during this Year of the Priesthood. Our parishes must become what the village of Ars had become under its saintly pastor: “a great hospital of souls.” The Divine Physician of our souls and bodies waits to disinfect the fetid wounds of our sins with His Precious Blood; He waits to anoint them with the healing balm of the Holy Spirit — and this He wills to do through the ministry of His priests.

The Needs of Souls
Saint John Mary Vianney adapted his treatment of souls to the particular needs of each one. Listen to what Pope Benedict XVI writes:

Those who came to his confessional drawn by a deep and humble longing for God’s forgiveness found in him the encouragement to plunge into the ‘flood of divine mercy’ which sweeps everything away by its vehemence.
If someone was troubled by the thought of his own frailty and inconstancy, and fearful of sinning again, the Curé would unveil the mystery of God’s love in these beautiful and touching words: ‘The good Lord knows everything. Even before you confess, He already knows that you will sin again, yet He still forgives you. How great is the love of our God: He even forces Himself to forget the future, so that He can grant us His forgiveness.’ To those who made a lukewarm and rather indifferent confession of sin, he clearly demonstrated by his own tears of pain how abominable this attitude was. ‘I weep,’ he used to say, ‘because you don’t weep.’

A Quickening of Sacramental Life
The Sacerdotal Pentecost — the New Pentecost of the Priesthood — for which we are praying will be revealed, not in a might wind and tongues of fire, not in a profusion of extraordinary charisms, but in a quickening of sacramental life in every parish, in every diocese, and in the Church throughout the world. Let the sacramental dance begin: from the altar to the confessional, from the confessional to the altar, and then into the darkness of a world waiting for the light of Christ, into the coldness of a world waiting for His warmth, into the infirmity of a world waiting for His healing touch. Eucharistic Face of Jesus, sanctify Thy priests!