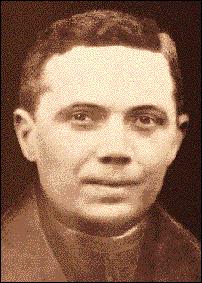 A Holy Priest
Today is the memorial of Blessed Edouard Poppe, priest (1890-1924). The approach of The Year of the Priest makes the example of his short life particularly compelling. Born into a Belgian working family — his father was a baker — on December 18, 1890, the young Edouard heard Jesus calling him to the priesthood at an early age. In my own experience, this is not unusual. I have known priests who admit that they were first aware of their vocation between the ages of 3 and 7!
Children and the Eucharist
Ordained a priest on May 1, 1916, Edouard was assigned to a working class parish in Gand. Creative and enterprising, he devoted himself to the education of children in the faith. More than anything else, he worked to bring children to the Most Holy Eucharist, and the Most Holy Eucharist to children.
A More Hidden Life
At the close of World War I, Edouard’s chronic poor health caused him to be named chaplain to the Sisters of Charity at Moerzeke, and to the residents of their home for the aged poor, sick, and orphans. Another priest shared his home at Moerzeke; they lived in a holy friendship, sharing the same table, praying, working, and recreating together. The two priests began a weekly hour of Eucharistic adoration on Thursday evenings; before long they were not alone before the Blessed Sacrament. Others, drawn by their example, asked to join them in adoration. The number of adorers grew until the chapel was filled to capacity.
Priestly Blessing and Daily Confession
Edouard and M. de Beukelaers, his priest-brother, blessed one another at the beginning of each day, and every evening they made their Confession one to the other, receiving from each other the grace of sacramental absolution. They referred to this as “the washing of the feet.” Edouard said, “Try this daily Confession. You will feel better because of it.” To a friend who objected, “But I would never know what to say!” Edouard replied, “In fact, that was my case too. It often happens that I cannot find in the actions of my day sufficient matter for confession. That’s not important. The sacrament floods me with its healing power.” Then, pinching his nose as if he were smelling a stench, he added, “I can always reopen the grave of my past.”
Saint Thérèse and the Little Way
On September 15, 1920, after visits to Lourdes and to the tomb of Blessed Peter Julian Eymard in Paris, Edouard Poppe visited the tomb of the Venerable Thérèse de l’Enfant Jésus et de la Sainte-Face at the Carmel of Lisieux in France. This contact with Saint Thérèse marked a turning-point in his life. Her “Little Way” would become his path to holiness.
Mary, Mediatrix of All Graces
Marked by the teaching of Saint Louis-Marie Grignion de Montfort on True Devotion to the Blessed Virgin Mary, and by Cardinal Mercier’s energetic initiatives in favour of the solemn definition of the dogma of Our Lady’s universal mediation of graces, Edouard’s priestly life was profoundly Marian. Dispensed from the recitation of the Divine Office because of his poor health, he replaced it with the devout recitation of rosary upon rosary. The liturgical feast of the Blessed Virgin Mary, Mediatrix of All Graces was for him a moment of profound spiritual joy. “Give yourselves to Mary,” he said to his spiritual sons. “You will know the magnificent power of her mediation in your life. You will see how your Mother watches over you and desires your sanctification.”
The Sanctification of Priests
In 1922, Edouard was named Spiritual Father to the young priests and clerics preparing for obligatory military service at Léopoldsburg. The zeal for priestly holiness that had always burned in his heart became a consuming blaze. As priest and victim, and in spiritual communion with the Daughters of the Heart of Jesus founded by the Blessed Marie de Jésus Deluil-Martiny, Edouard Poppe made the offering of his life for the sanctification of priests. “I burn,” he wrote, “for the coming of the reign of God in priestly souls. I burn, but I am so poor that I will be consumed before the coming of the desired reign.”
To the Spiritual Mothers of Priests
To the Daughters of the Heart of Jesus at Berchem, called to the spiritual motherhood of priests, he wrote: “O my Sisters, if only you knew what it costs a secular priest to keep whole his ideal in the midst of his family, in the midst of his parish, in the solitude of aspirations that are misunderstood.” Again he wrote, “Come, all the same, to the help of the body of the clergy; they have such good will. They are hungry and I have nothing to give them. Sisters, is there no one among you to show compassion in the face of such need, to accept the role of mediatress and mother? Your vocation attributes to you the role of Mary. I implore you, then, in the name of the entire priesthood, the mystical heart of Jesus; be generous, come to our aid.”
Surrendered to Merciful Love
On the morning of June 10, 1924, Edouard Poppe, the most loved priest in Flanders, died at thirty-three years of age. His eyes were fixed on an image of the Sacred Heart of Jesus. He had surrendered himself totally to His merciful love. “I never asked the Lord that I might live to an old age,” he said, “but only that men might love Him and that priests might become holy.”