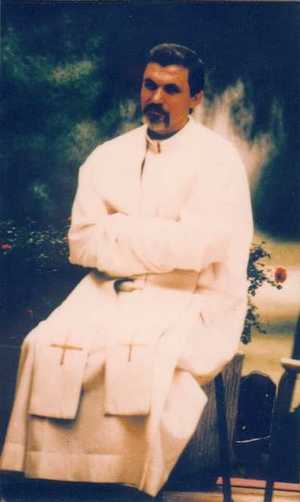 Fatima and Death
In February 1996 Father Leopoldo participates in a pilgrimage of Portuguese priests to Fatima. At Fatima he makes a retreat in preparation for Lent. It will be the last Lent of his life. Diagnosed with acute hepatitis, he returns to Italy accompanied by a missionary Sister, on May 13, the feast of Our Lady of Fatima. He is immediately hospitalized in Piacenza. Father Leopoldo impresses the hospital personnel by his simplicity and peace in the face of death. One of his nurses remarked, “I don’t know how he manages never to complain.” He dies on May 26th.
The Care of Souls and Bodies
A few months after his death the city of Lodi awards Father Leopoldo posthumously the Gold Medal for Civic Achievement. The award is motivated by:
Mirabile esempio di dedizione incondizionata alla Chiesa e a Cristo, totalmente dedito alla cura e al servizio degli altri.
Questo amore incondizionato per il suo prossimo lo porta a donare la sua vita per le missioni, lavorando instancabilmente per lo spirito e la promozione umana di quelle popolazioni.
La sua cristianità era un perfetto connubio tra la cura dell’ anima alimentata quotidianamente da lunghe ore di preghiera – e quella del corpo, passata nei villaggi ad ascoltare, consigliare, dare conforto a quanti si rivolgevano a lui, con la sua abituale serenità e cordialità.
“His wonderful example of unconditional dedication to the Church and to Christ, totally given to the care and service of others.
This unconditional love for his neighbour compels him to give his life for the missions, working tirelessly for the spirit and human advancement of these populations.
His Christianity was a perfect marriage between the care of souls nourished daily by long hours of prayer, and the care of the body, passing in the villages to listen, to counsel, and to give comfort to those who turned to him, with his habitual serenity and cordiality.”
The Man of God
What was the priestly spirituality of Father Leopoldo Pastori? Its outstanding characteristic was the desire for God expressed, above all, in silence and in adoration of the Blessed Sacrament. His ideal of missionary life was to be a man of God, a man of prayer, a man who ceaseless sought God so as to know Him, love Him, experience Him, and thus be able to transmit this experience to others. He was, at the same time, a resolutely active missionary, making the best use of the scant energy left him by the hepatitis that so weakened him.
The Face of God
Father Leopoldo was known never to have spoken ill of others. There was no evidence in his life of discouragement, melancholy, or pessimism. He came to cherish illness as a privileged means of union with Christ. He referred to the sick as, “the beloved of Jesus.” His diary reveals a burning desire to encounter God, and a tender love for Jesus and Mary. The leit-motif of his diary is “to do the Will of God” — to this Father Leopoldo joined the prayer of the apostles, “Teach me how to pray,” and the cry of the psalmist, “Let me see your Face.”
Pray For Us
The holiness of Father Leopoldo is best seen against the background of his chronic illness. Hepatitis drained away his strength, kept him from working, and weakened him at every level. His brand of holiness was not to be that of the enterprising missionary going from one pastoral accomplishment to another. It was that of the missionary-monk, of the priest-adorer of the Blessed Sacrament, of the loving son of the Virgin Mary, the brother of Saint Thérèse of the Child Jesus, and the spiritual father of souls sent to him by God. I ask his intercession for myself and for all priests.