Skip to content
HomePope Benedict XVIPray much and pray well 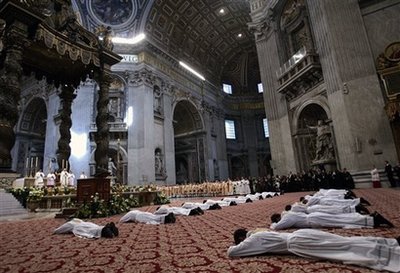 For the Year of the Priest

I just translated (rather quickly) a section of the splendid homily given yesterday by Pope Benedict XVI at the Ordination to the Priesthood of nineteen deacons in Saint Peter’s Basilica. In my own service to my brother priests, I find that a recurring question is how best a priest can go about praying . . . praying in such a way that his life is prayer, and that prayer is his life. This is precisely the question that the Holy Father addressed yesterday. My own comments follow each section. I dedicate this little entry to my dear brother and son in Christ, Father B.J.

Here I would like to touch upon a point that is particularly close to my heart: prayer and its link to service. We saw that to be ordained priests means to enter, in a sacramental and existential way into the prayer of Christ for “His own.” Out of this, for us priests, flows a particular vocation to prayer, in a strongly Christocentric sense: we are called, that is, to “abide” in Christ — as the Evangelist John loved to repeat (cf. Jn 1, 35-39; 15, 4-10) — and this is realized especially in prayer. Our ministry is totally bound up with this “abiding”, which equals praying, and from this derives its efficacy.

There is an extraordinary density in this excerpt. First of all, the Holy Father confesses that the relationship of prayer to service (diakonìa) is particularly close to his own heart. Then, like the Johannine eagle, he rises to the heights of the mystery of priestly prayer; it is nothing other than an ongoing entrance — or “passing into” — the prayer of Christ for His own, for all whom the Father has given Him. “I came,” He says, “that they may have life, and have it abundantly” (Jn 10:10).
Pope Benedict XVI then affirms that priests have a particular vocation to prayer. “Wait just a minute,” I can hear some of my brother priests saying, “I thought that monks had a particular vocation to prayer. My vocation is to ministry.” (I’ve heard this old slogan before.) From the beginning of his pontificate Pope Benedict has sought to close the artificial gap between monastic spirituality and ministerial spirituality. The tired slogan, “We are not monks” has been used to justify slacking off in a multitude of ways. The Curé of Ars was not a monk — he was the quintessential parish priest — and yet his life surpassed in prayer and in austerity that of the most observant monks in their cloisters.
Let’s allow the Holy Father to address the issue. The priest, before being sent forth to minister, is called to abide in Christ. Saint Thomas Aquinas, in his hymn for Lauds of Corpus Christi, has us sing:
Verbum supernum prodiens,
Nec Patris linquens dexteram,
Ad opus suum exiens,
Venit ad vitæ vesperam.
The heavenly Word proceeding forth,
Yet leaving not his Father’s right side,
And going to His work on Earth,
Has reached at length life’s eventide.
Just as Christ, on His mission of salvation, came into this world from the bosom of His Father, without leaving the Father’s side, so too does the priest go forth on His mission from the Side of Christ, and without leaving the Side of Christ or, if you will, the tabernacle of His Sacred Heart. The priest is called to “abide” in ceaseless prayer, to go forth enveloped in prayer and to bring the sweet fragrance of his prayer wherever he goes. “But thanks be to God,” says the Apostle, “who in Christ always leads us in triumph, and through us spreads the fragrance of the knowledge of Him everywhere. For we are the aroma of Christ to God among those who are being saved and among those who are perishing” (2 Cor 2, 14-15).

The Priest’s Daily Rule of Prayer

In such a perspective we must think of the various forms of the prayer of a priest, first of all daily Holy Mass. The Eucharistic celebration is the greatest and highest act of prayer, and constitutes the center and wellspring from which all the forms receive their “lifeblood”: the Liturgy of the Hours, Eucharistic adoration, lectio divina, the Holy Rosary, and meditation. All these expressions of prayer have their centre in the Eucharist, and together bring about in the day of the priest and in all his life the fulfillment of the word of Jesus: “I am the good shepherd, I know My own and My own know Me, as the Father knows Me and I know the Father; and I lay down My life for the sheep” (Jn 10, 14-15).

The Priest Who Prays Much and Prays Well

In fact, this “knowing” and “being known” in Christ and, through Him, in the Most Holy Trinity, is nothing other than the truest and deepest reality of prayer. The priest who prays much, and who prays well, progressively becomes expropriated of himself and ever more united to Jesus, the Good Shepherd and Servant of the brethren. In conformity with Him, the priest also “gives his life” for the sheep entrusted to him. No one takes it from him; of himself he offers his life, in union with Christ the Lord, Who has the power to give His life and to take it upon again, not only for Himself, but also for His friends, bound to Him by the Sacrament of Orders. In this way the very life of Christ, Lamb and Shepherd, is communicated to the whole flock, through the mediation of consecrated ministers.

“The priest who prays much and prays well” — what a marvelous phrase! It sums up the Holy Father’s teaching on the subject. What is the fruit of praying much and praying well? A progressive, and I would add almost imperceptible, death to self and rising to newness of life in Christ Jesus, for the sake of His Spouse, the Church. The priest who prays much and prays well will, sooner or later, find himself drawn into the mystery of Christ Priest and Victim. He will learn to stand at the altar not only as the one who offers the Sacrifice, but as the one who is sacrificed, becoming one with the immolated Lamb. This is the secret of a fruitful priesthood. “Give your blood,” said one of the Desert Fathers, “and receive the Spirit.” Through the victimhood of the priest, the entire Body is quickened and sanctified. “And for their sake I consecrate myself, that they also may be consecrated in truth” (Jn 17, 19).