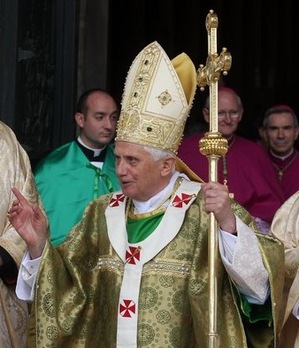 Today at the Basilica of Saint Paul Outside the Walls, Pope Benedict XVI opened the Synod Assembly by preaching on the Gospel of the 27th Sunday of the Year A, Matthew 21, 33-43.
When God Resorts to Punishment
“This page of the Gospel applies to our own way of thinking and acting; it applies especially to those peoples who have received the proclamation of the Gospel. If we look at history, we are forced to recognize that it is not rare for inconsistent Christians to be cold and rebellious. As a result of this, although God never fails his promise of salvation, he has often had to resort to punishment.
Nations Once Rich in Faith and Vocations
It is spontaneous to think, in this context, of the first proclamation of the Gospel, which gave rise to Christian communities that at first were flourishing, but later disappeared and are now remembered only in the history books. Could not the same thing happen in our time? Nations that at one time were rich in faith and vocations are now losing their identity, under the harmful and destructive influence of a certain modern culture.
Man Without God: Unhappy and Alone
There are those who, having decided that ‘God is dead’, declare themselves ‘gods’, believing themselves the sole creators of their own destiny and the absolute owners of the world. In casting off God and not awaiting salvation from him, man believes that he can do whatever he likes and set himself up as the sole measure of himself and his action. But when man eliminates God from his horizon, is he truly more happy? Does he truly become more free? When men proclaim themselves the absolute owners of themselves, and the sole masters of creation, can they truly build a society in which freedom, justice, and peace reign? Does it not instead happen – as daily events abundantly demonstrate – that there is the expansion of arbitrary power, egoistic interest, injustice and exploitation, violence in all of its expressions? The result, in the end, is that man finds himself more alone, and society is more divided and confused.”
There Will Be Other Peoples Ready to Accept the Faith
But “there is a promise in the words of Jesus: the vineyard will not be destroyed. Although he leaves the unfaithful keepers of the vineyard to their fate, the owner does not abandon his vineyard, and he entrusts it to other servants, who are faithful. This indicates that, if in some regions faith becomes weak to the point of disappearing, there will always be other peoples ready to accept it.”