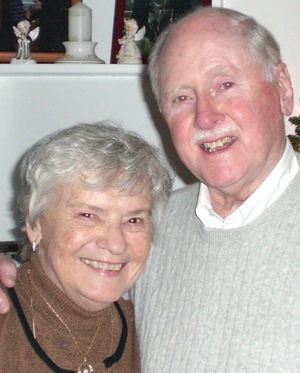 On April 5, 2008 the Holy Father addressed the Pontifical Council of the Family on “Grandparents: Their Witness and Presence in the Family.” I was blessed to know all four of my grandparents, the Irish set and the Italian set, as well as my maternal great-grandparents from Italy. My own experience taught me that grandparents have an integral role in family life. Many of the things I cherish most in life were transmitted to me by my grandparents.
As a young teenager I volunteered at the local Home for the Aged of the Little Sisters of the Poor. Saint Andrew’s Home was a vast old brick building with, at its heart, the chapel. The chaplain, Father Alfred DiMeo, lived in a charming little presbytery next to the Home. I recall his kindness to the “old people” and to the volunteers. My mentor at Saint Andrew’s Home was Sister Ignace de la Trinité, L.S.P. By helping at the Home I learned to reverence the elderly and, even if I had few practical skills to offer at the time, acquired a tenderness for them.
The photo is of my Mom and Dad, loving grandparents of eleven grandchildren.
Grandparents in the Life of the Family
In the past, grandparents had an important role in the life and growth of the family. Even with their advancing age they continued to be present with their children, their grandchildren and even their great-grandchildren, giving a living witness of caring, sacrifice and a daily gift of themselves without reserve. They were witnesses of a personal and community history that continued to live on in their memories and in their wisdom. Today, the economic and social evolution has brought profound transformations to the life of families. The elderly, including many grandparents, find themselves in a sort of “parking area”: some realize they are a burden to their family and prefer to live alone or in retirement homes with all the consequences that such decisions entail.
Reverence for Old Age
Unfortunately, it seems that the “culture of death” is advancing on many fronts and is also threatening the season of old-age. With growing insistence, people are even proposing euthanasia as a solution for resolving certain difficult situations. Old age, with its problems that are also linked to the new family and social contexts because of modern development, should be evaluated carefully and always in the light of the truth about man, the family and the community. It is always necessary to react strongly to what dehumanizes society. Parish and diocesan communities are forcefully challenged by these problems and are seeking today to meet the needs of the elderly. Ecclesial movements and associations exist which have embraced this important and urgent cause. It is necessary to join forces to defeat together all forms of marginalization, for it is not only they – grandfathers, grandmothers, senior citizens – who are being injured by the individualistic mindset, but everyone. If grandparents, as is said often and on many sides, are a precious resource, it is necessary to put into practice coherent choices that allow them to be better valued.
Spiritual and Moral Reference Points
May grandparents return to being a living presence in the family, in the Church and in society. With regard to the family, may grandparents continue to be witnesses of unity, of values founded on fidelity and of a unique love that gives rise to faith and the joy of living. The so-called new models of the family and a spreading relativism have weakened these fundamental values of the family nucleus. The evils of our society – as you justly observed during your work – are in need of urgent remedies. In the face of the crisis of the family, might it not be possible to set out anew precisely from the presence and witness of these people – grandparents – whose values and projects are more resilient? Indeed, it is impossible to plan the future without referring to a past full of significant experiences and spiritual and moral reference points. Thinking of grandparents, of their testimony of love and fidelity to life, reminds us of the Biblical figures of Abraham and Sarah, of Elizabeth and Zechariah, of Joachim and Anne, as well as of the elderly Simeon and Anna and even Nicodemus: they all remind us that at every age the Lord asks each one for the contribution of his or her own talents.