Skip to content
HomeEucharistic Face of ChristFocusing On That Face 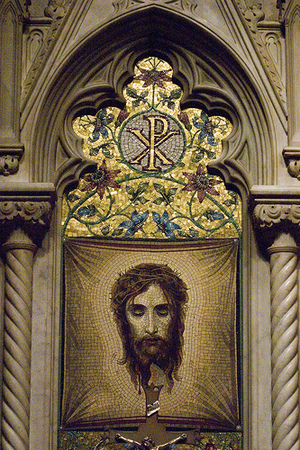 I am overwhelmed by this letter from the Congregation for the Clergy. It expresses all that I have tried to say on Vultus Christi and elsewhere. The subtitles in boldprint are my own. I will be returning to the text of the letter in order to meditate its content. I took the photo of the Altar of the Holy Face in Saint Patrick’s Cathedral, New York City.
Vatican City, April 22, 2008
Here is the message published by the Congregation for Clergy for the World Day of Prayer for the Sanctification of Priests. The day will be celebrated May 30, the feast of the Sacred Heart of Jesus.
Reverend and dear Brothers in the Priesthood,
Focusing On That Face
On the Feast of the Sacred Heart of Jesus let us fix the eyes of our minds and hearts with a constant loving gaze on Christ, the one Savior of our lives and of the world. Focusing on Christ means focusing on that Face which every human being, consciously or not, seeks as a satisfying response to his own insuppressible thirst for happiness.
Hearts Wounded By His Love
We have encountered this Face and on that day, at that moment, his Love so deeply wounded our hearts that we could no longer refrain from asking ceaselessly to be in his Presence. “In the morning you hear my voice; in the morning I prepare a sacrifice for you and watch” (Psalm 5).
Healed By His Flesh
The Sacred Liturgy leads us once again to contemplate the Mystery of the Incarnation of the Word, the origin and intimate reality of this company which is the Church: the God of Abraham, Isaac and Jacob revealed himself in Jesus Christ. “No one could see his Glory unless first healed by the humility of his flesh…. By dust you were blinded, and by dust you are healed: flesh, then, had wounded you, flesh heals you” (St. Augustine, Commentary on the Gospel according to John, Homily, 2, 16).
Mercy That Embraces Our Limitations
Only by looking again at the perfect and fascinating humanity of Jesus Christ — alive and active now — who revealed himself to us and still today bends down to each one of us with his special love of total predilection, can we can let him illumine and fill the abyss of need which is our humanity, certain of Hope encountered and sure of Mercy that embraces our limitations and teaches us to forgive what we ourselves do not even manage to discern. “Deep calls to deep at the thunder of your cataracts” (Psalm 42[41]).