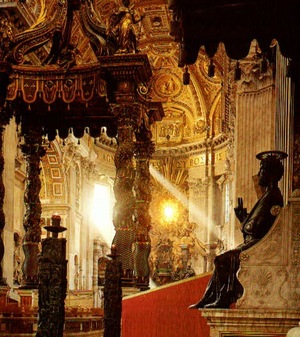 A Centenary
The Octave of Prayer for Christian Unity began today . . . for the one hundreth time. Episcopal Father Paul James Wattson, the founder of the Society of the Atonement, initiated the observance in 1908. In a letter to another Anglican clergyman, The Reverend Spencer Jones, Father Paul proposed dedicating eight days to a fervent prayer of intercession for unity; the Octave opened on the Feast of the Chair of Saint Peter at Rome, January 18th, and ended on the Feast of the Conversion of Saint Paul, January 25th.
Already in 1908, over 2000 persons joined their prayer to that of Father Paul and his collaborator, Mother Lurana Mary White. Writing of the experience in his periodical, The Lamp, Father Paul expressed a wish that, “this Church Unity observance so auspiciously begun, may be kept with increasing numbers year after year until Our Lord’s prayer, Ut omnes unum sint is completely fulfilled.”
In October 1909, Monsignor Joseph Conroy of Ogdensburg, New York, received “The Society of the Atonement” — Father Paul, Mother Lurana, and a few companions — into the Catholic Church.
Father George Ignatius Spencer
Father Paul’s Octave for Church Unity was not an isolated initiative. The Holy Ghost had already moved other souls to offer a similar prayer for unity. In 1839, Father Ignatius Spencer, a convert from the Church of England, launched a crusade of prayer on the First Thursday of every month for the conversion of England. Father Ignatius’ crusade was grounded in the meditation of the Priestly Prayer of Christ in the seventeenth chapter of Saint John’s Gospel. He has been called the “Apostle of Ecumenical Prayer.” In 1847 Father Spencer entered the Congregation of the Passion, becoming Father Ignatius of Saint Paul.
The Abbé Couturier
January 1933 saw the French priest Paul Couturier extend the scope of the Octave for Church Unity to include those who, without focusing on a visible reunion with the Church of Rome under the Successor of Saint Peter, desired nonetheless to participate in an effort of spiritual ecumenism. He proposed a week of prayer that would express the adhesion of all Christians to the prayer of Christ, “that all may be one” (Jn 17:21). In 1934, the Abbé Couturier’s vision merged with that of Father Ignatius Spencer, Father Paul Watson, and Mother Lurana White to become the Week of Prayer for Christian Unity in its present form.
Blessed Maria Gabriella dell’Unità
The Abbé Couturier communicated his zeal for Christian Unity in his personal correspondence with Mother Maria Pia, Abbess of the Monastery of Grottaferrata in Italy. In 1938, Mother Maria Pia shared with her community a letter she had received from the Abbé Couturier. He wrote of Catholics, Protestants, and Orthodox Christians who had made the offering of their lives for the unity of the Church. Mother Maria Gabriella, a young nun, recently professed, received an inner calling to make the same gesture. Our Lord accepted her offering. Maria Gabriella died on April 23, 1939. It was Good Shepherd Sunday. After her death, her Sisters discovered that her worn New Testament opened by itself to the seventeenth chapter of Saint John. The pages of Jesus’ Priestly Prayer to the Father, so often turned by her feverish fingers, were almost transparent. Pope John Paul II beatified Mother Maria Gabriella on January 25, 1983, the last day of the Week of Prayer for Christian Unity.
For my part, I remain attached to Father Paul’s original vision for the Octave of Prayer for Christian Unity, and prefer the prayers that he proposed a century ago.

Antiphon: That they all may be one,
as Thou, Father, in me and I in Thee;
that they also may be one in Us;
that the world may believe that Thou hast sent me.
V. I say unto thee, thou art Peter;
R. And upon this rock I will build my Church.
[Here recall the intention for the day’s prayer.]
January 18
For the return of the “other sheep” to the One Fold of our Lord Jesus Christ.
January 19
For the return of the Eastern Orthodox Christians to communion with the Apostolic See.
January 20
For the return of the Anglicans to the authority of the Vicar of Christ.
January 21
For the return of all Protestants throughout the world to the unity of the Catholic Church.
January 22
That Christians in America may be one, in union with the Chair of Saint Peter.
January 23
That lapsed Catholics will return to the Sacraments of the Church.
January 24
That the Jewish people will be converted to the Catholic Faith.
January 25
That missionary zeal will conquer the world for Christ.
Let us pray.
O Lord Jesus Christ, who saidst unto Thine Apostles:
Peace I leave you, My peace I give to you;
regard not our sins, but the faith of Thy Church,
and grant unto her that peace and unity which are agreeable to Thy Will;
Who livest and reignest ever, one God, world without end. Amen.