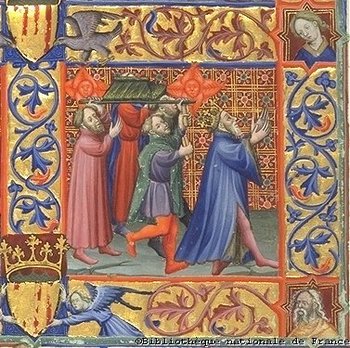 Week of Sexagesima
Tuesday of the Third Week of the Year I
2 Samuel 6:12–19
Mark 3:31–25
The Ark of the Covenant
The Ark of the Covenant that figures so prominently in the First Reading is, according to Saint Maximus of Turin, a type of the Blessed Virgin Mary. Saint Maximus explains that King David’s rapturous dance before the Ark was a prophetic gesture: “In high rejoicing he broke into dancing, for in the Spirit he foresaw Mary, born of his own line, brought into Christ’s chamber. . . . The Ark carried within it the tables of the covenant, while Mary bore the master of the same covenant.”
The Blessed Virgin Mary
The Ark of the Covenant contained the Law; the Virgin Mary contained the Word made Flesh, the living Gospel, the fulfillment of the Law and the Prophets. The Ark was resplendent both within and without with pure gold; Mary was resplendent both within and without with the dazzling radiance of her virginity. The Ark was adorned with earthly gold; Mary was begraced with an imperishable holiness.
True Devotion to Mary
Every authentic expression of devotion to the Blessed Virgin Mary is a way of “dancing before the Ark of the Covenant.” The Litany of Loreto calls upon Our Lady by means of this very expression: Foederis arca, ora pro nobis! Ark of the Covenant, pray for us.
David was not self-conscious in his dance. He was humble, spontaneous, and single-hearted: figuratively and literally moved by grace. Every encounter with the Mother of God — in the liturgy of the Church, in her images, and in the secret manifestations of her presence that comfort us in this valley of tears — should move us to a similar expression of devotion: humble, spontaneous, and single-hearted.

The Most Holy Eucharist
The same Ark of the Covenant that prefigures the Blessed Virgin Mary, also prefigures the tabernacle that contains the real presence of Our Lord Jesus Christ in the Blessed Sacrament. David danced with all his might before the ark of the covenant; the Church has always taught her faithful to give an outward demonstration of faith before the Mystery of the Eucharist.
Greeted With Wonder
In a text that was released last week, Archbishop Malcolm Ranjith, the Secretary of the Congregation for Divine Worship, had this to say: “The Eucharist, bread transubstantiated into the Body of Christ and wine into the Blood of Christ, God among us, is to be greeted with wonder, reverence and an immense attitude of humble adoration.” David translated his wonder, his reverence, his adoration in an exuberant dance. In our Catholic tradition, we greet Our Lord, present in the Eucharist, by the genuflexion, by the profound inclination, and by kneeing before Him. What are these things if not a kind of dance, a choreography of the Church’s faith in the Most Holy Eucharist, that is both Sacrament and Sacrifice?
Kneeling
Archbishop Ranjith goes on to say, “It is clear that it became coherent and indispensable to take actions and attitudes of the body and spirit which makes it easier to [enter into] silence, recollection, and the humble acceptance of our poverty in the face of the infinite greatness and holiness of the One who comes to meet us in the Eucharistic species. The best way to express our sense of reverence to the Lord in Mass is to follow the example of Peter, who as the Gospel tells us, threw himself on his knees before the Lord and said, ‘Lord, depart from me, for I am a sinner ” (Luke 5, 8).”
Humility and Lucidity
It is inspiring to see the humility and lucidity with which Archbishop Ranjith and other Roman officials are willing to critique and correct the practices and adaptations of the past forty years. Speaking of Holy Communion in the hand, he says,
“Whatever the reasons for this practice, we cannot ignore what is happening worldwide where this practice has been implemented. This gesture has contributed to a gradual weakening of the attitude of reverence towards the sacred Eucharistic species whereas the previous practice had better safeguarded that sense of reverence. There instead arose an alarming lack of recollection and a general spirit of carelessness. We see communicants who often return to their seats as if nothing extraordinary has happened. . . . In many cases, one cannot discern that sense of seriousness and inner silence that must signal the presence of God in the soul. Then there are those who take away the sacred species to keep them as souvenirs, those who sell, or worse yet, who take them away to desecrate it in Satanic rituals. Even in large concelebrations, also in Rome, several times the sacred species has been found thrown onto the ground. This situation not only leads us to reflect upon a serious loss of faith, but also on outrageous offenses.”
The Reform of the Reform
With the teaching and example of Our Holy Father to guide it, the reform of the reform is well under way. Archbishop Ranjith concludes:
“Now I think it is high time to review and re-evaluate such good practices and, if necessary, to abandon the current practice that was not called for by Sacrosanctum Concilium, nor by Fathers, but was only accepted after its illegitimate introduction in some countries. Now, more than ever, we must help the faithful to renew a deep faith in the Real Presence of Christ in the Eucharistic species in order to strengthen the life of the Church and defend it in the midst of dangerous distortions of the faith that this situation continues to cause.”
A Rightly Ordered Choreography
The Church does not wish to suppress “dancing before the Ark of the Covenant.” She wishes only that it be rightly ordered. The choreography must be worthy of the Mystery or, as Saint Paul says, “let all things be done to edification” (2 Cor 14:26).