Thursday of the Second Week of Advent
December 13
Saint Lucy, Virgin and Martyr
Isaiah 41:13-20
Psalm 144: 1 and 9, 10-11, 12-13ab
Matthew 11:11-15
And the Violent Bear It Away
“And from the days of John the Baptist until now, the kingdom of heaven suffereth violence, and the violent bear it away” (Mt 11:12). What exactly is Our Lord saying in today’s Gospel? What does Our Lord mean when He tells us that “the kingdom of heaven suffereth violence, and the violent bear it away”? Are we, then, to be violent? Is there such a thing as a holy violence?
Swift and Intense Force
The dictionary defines violence as swift and intense force. Although the word has acquired a negative connotation in common usage, violence is not, of itself, sinful. The moral quality of violence — a swift, and powerful application of energy — derives from the object for which, or against which, it is expended. Violence can be virtuous. The Kingdom of Heaven is worthy of our violence. All the saints understood this. One who would bear away the Kingdom of Heaven must be prepared to act swiftly, intensely, and forcefully.
Holy Violence
Holy Violence is the virtue opposed to the vice of the spiritual dilly-dallier, the feeble, indecisive, spineless, ineffectual milquetoast. Holy violence is an expression of the virtue of fortitude. It is related to the boldness that comes from the Holy Spirit.
The Tolerance of the Relativists
There are those, even within the Church, who think that peace — or what they would like to call peace — is worth any price. They will go to any length to avoid confrontations, to appear to agree when they disagree, to approve when they disapprove, to keep everyone happy. The moral relativism pandemic in society today fosters this attitude. The relativists would have us believe that there are no absolute truths, that nothing is absolutely wrong or absolutely right. They preach a wishy-washy adaptability to whatever the prevailing trends happen to be, and they call it tolerance. The relativists are forever saying, “To each his own.” The idea of going against the social or political grain fills them with horror. There are no martyrs among them. 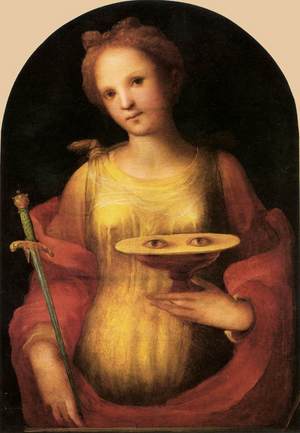 Saint Lucy
And Saint Lucy? She could have saved her life in this world, had she not insisted on being altogether more violent than the torturers who took her life by violence. More violent? Yes. More violent, because Saint Lucy applied all the strength of her virginal love swiftly, intensely, and forcefully to bearing away the Kingdom of Heaven.
Thursdays for Priests
Thursday, being the day of the mysteries of the Cenacle, invites us to adoration of the Blessed Sacrament and to reparation and intercession for priests. Today, we might consider asking Our Lord to pour out upon His priests the grace of a holy violence for the sake of the Kingdom of Heaven. The priest who bears away the Kingdom by violence will bring multitudes of souls with him.
The Lion and the Lamb
The violence of the Lion is inseparable from the meekness of the Lamb. One virtue does not cancel out the other. It completes it. Let us approach the Holy Mysteries today with a violent desire. Receive the Lion and become like the Lamb. Receive the Lamb and become like the Lion.