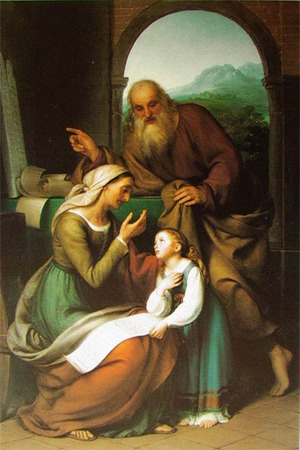 The Most Holy Name of Mary
Sirach 24:17–21
Luke 1:46–48, 49–50, 53–54
Luke1:26–38
Victory in the Name of Mary
In 1683 Pope Innocent XI extended the existing Feast of the Most Holy Name of Mary to the universal Church to thank Our Lady for the victory of John Sobieski, king of Poland, over the forces of militant Islam. On September 11th, 1683, Muslim Turks attacked Vienna, threatening the Christian West. The next day, Sobieski, invoking the Blessed Virgin Mary and placing his forces under her protection, emerged victorious.
A Feast Restored to the Roman Missal
In the culture of the Middle East one thinks more readily in terms of centuries than in terms of years. It would seem that Osama Bin Ladin chose September 11th for the attack on the United States in memory of that attack on the West on September 11th, 1683. Symbolic dates are important. Pope John Paul II restored the feast of the Holy Name of Mary with the publication of the Third Typical Edition of the Roman Missal in 2002, one year after the attacks of September 11th, 2001.
The Invocation of the Name of Mary
The Holy Mother of God is no stranger to the struggles of her children in this valley of tears. She is attentive to every situation that threatens this world of ours, to every assault against the Church and, when we invoke her Holy Name, she is quick to intervene. When it comes to calling upon the Name of Mary, there is no struggle too global and too enormous, and no struggle too personal or too little. In the Bible, the name wields a mysterious power. Names are not to be pronounced casually or lightly. Names are not to be taken in vain. The invocation of the name renders present the one who is named. So often as you pronounce the sweet Name of Mary with devotion and confidence, Mary is present to you, ready to help. So often as you pronounce the sweet Name of Mary, you have her full and undivided attention.
As Oil Poured Out
The saints, drawing on a verse from the Song of Songs, compare the Name of Mary to a healing oil. “Thy Name is as oil poured out” (Ct 1:2). Oil heals the sick, gives off a sweet fragrance, and nourishes fire. In the same way the Name of Mary is like a balm on the wounds of the soul; there is no disease of the soul, however malignant, that does not yield to the power of the Name of Mary. The sound of Mary’s Name causes joy to spring up; the repetition of Mary’s Name warms the heart. If you would touch the Heart of the Father, pronounce the Name of Jesus; if you would touch the Heart of Jesus, pronounce the Name of Mary.

Monastic Devotion
The Cistercians, the Carthusians, and the Olivetan Benedictines give to each and every monk and nun the sweet Name of Mary, as a sign of mystical identification with her, a pledge of entrustment to her, and a seal and safeguard of the monastic consecration. Father Gaucheron and Mother Marie des Douleurs deliberately chose this same age–old monastic custom for the Congregation of Jesus Crucified in 1930. They wanted each Sister to be continually reminded of her identification with the Blessed Virgin Mary in all her mysteries, especially in the “Yes” of the Annunciation and in her Compassion at the foot of the Cross. How precious this custom is! Every time a Sister is named, her mystical identification with Mary is reinforced, the protection of Mary is claimed over her, and the presence of Mary envelops her.
Of Mary Never Enough
The sophisticated and clever of the world, high and dry in their rationalism, smiled condescendingly at this naive practice of devotion. The reformers of 1968 judged it outdated and superfluous and, in seeking to make it optional, thought themselves wiser than their forbears. But the saints, I tell you, think otherwise. The saints understand the power of the Name of Mary. They understand that he or she who bears the Holy Name of Mary carries a shield against the poisonous darts of the enemy. Even whispered, the Name of Mary rejoices heaven and causes demons to tremble. For the saints there can never be too much of Mary. De Maria numquam satis. Of Mary, never enough! I cannot help but think that the suppression of the Name of Mary in so many monasteries and Congregations was a thorn in her maternal Heart.
Saint Bernard
No one has spoken more eloquently of the Holy Name of Mary than Saint Bernard. Last Sunday, at the end of his brilliant discourse at the Abbey of Heiligenkreuz, the Holy Father quoted Saint Bernard’s sermon on the Name of Mary. Allow his words to plant deep within your hearts the gift of an abiding devotion to Mary’s sweet Name:
Let us say a few words about this Name
which means “Star of the Sea”
and is so appropriate to the Virgin Mother.
She — I tell you — is that splendid and wondrous star
suspended as if by necessity over this great wide sea,
radiant with merit and brilliant in example.
O you, whoever you are,
who feel that in the tidal wave of this world
you are nearer to being tossed about among the squalls and gales
than treading on dry land:
if you do not want to founder in the tempest,
do not avert your eyes from the brightness of this star.
When the wind of temptation blows up within you,
when you strike upon the rock of tribulation,
gaze up at this star,
call out to Mary.
Whether you are being tossed about
by the waves of pride or ambition,
or slander or jealousy,
gaze up at this star,
call out to Mary.
When rage or greed or fleshly desires
are battering the skiff of your soul,
gaze up at Mary.
When the immensity of your sins weighs you down
and you are bewildered by the loathsomeness of your conscience,
when the terrifying thought of judgment appalls you
and you begin to founder in the gulf of sadness and despair,
think of Mary.
In dangers, in hardships, in every doubt,
think of Mary, call out to Mary.
Keep her in your mouth,
keep her in your heart.
Follow the example of her life,
and you will obtain the favour of her prayer.
Following her, you will never go astray.
Asking her help, you will never despair.
Keeping her in your thoughts, you will never wander away.
With your hand in hers, you will never stumble.
With her protecting you, you will not be afraid.
With her leading you, you will never tire.
Her kindness will see you through to the end.
Then you will know by your own experience
how true it is that the Virgin’s Name was Mary.