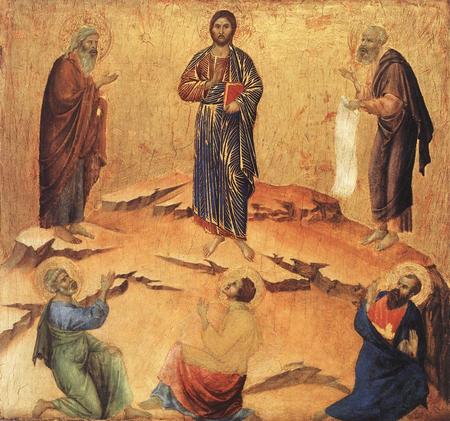 To the Mountain of the Lord
The prophet Isaiah says that, “It shall come to pass in the latter days, that the mountain of the house of the Lord shall be established as the highest of the mountains, and shall be raised above the hills; and all the nations shall flow to it, and many peoples shall come, and say, ‘Come let us go up to the mountain of the Lord, to the house of the God of Jacob’” (Is 2:1-3).
The house of the Lord is no longer the tent of meeting pitched by Moses in the desert (Ex 33:7), the tent upon which descended the pillar of cloud (Ex 33:9), the tent wherein the Lord used to speak to Moses face to face, as a man speaks to his friend (Ex 33:11). We heard, in the second reading of the Vigil, that “everyone who sought the Lord would go out to the tent of meeting” (Ex 33:7). Moses used to come out of his ineffable conversations with the Lord so transfigured and radiant that he was obliged to cover his face with a veil, for the skin of his face shone with the glory of the Lord (Ex 35:33-35). The tent of meeting in the desert, set up according the prescriptions of the Lord, was but a figure and foreshadowing of the mystery we celebrate today.
The Tent
In the tent of meeting we discern, “as in a mirror dimly” (1 Cor 13:12), an obscure and mysterious revelation of the adorable Trinity. The tent prefigures the Body of Christ, the true, abiding, and indestructible place of meeting between God and man. Everyone who seeks the Father must go out to the new tent of meeting, that is, the Body of Christ, for he himself says, “No one comes to the Father, but by me” (Jn 14:6).
In the tent, Moses heard the voice of the Lord speaking to him mouth to mouth (Num 12:8), the same voice that, in the beginning, had uttered, “Let there be light” (Gen 1:3). At the sound of the voice of the Lord, something of old Adam stirred deep inside Moses, and he remembered the voice that, in the garden, had called so gently, “Where are you?” (Gen 3:9).
Moses beheld the pillar of cloud hovering over the tent (Ex 33:9). Something of old Adam stirred deep inside him, and he remembered the sound of the Lord God walking in the garden in the cool of the day (Gen 3:8), in the breath of a gentle evening breeze.
Behold the tent, behold the voice, behold the cloud! Are we to look upon such mysteries and fail to see a dark and veiled epiphany of the Three calling us into the communion of their divine life? The tent points to Christ, the voice to the Father, the cloud to the Holy Spirit.