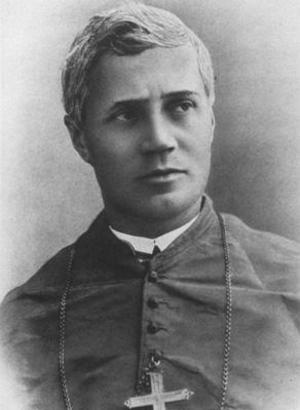 The Lord Is With Thee
Today’s First Lesson gives us the Angel’s greeting to Gideon. “The angel of the Lord appeared to him and said, ‘The Lord is with thee, O most valiant of men” (Jgs 6:12). The Archangel Gabriel greeted the Virgin of Nazareth with similar words: “Hail, full of grace, the Lord is with thee” (Lk 1:28). Now that “the fullness of time has come” (Gal 4:4), that greeting from heaven has passed into the liturgy of the Church on earth.
At the beginning of Holy Mass and at key moments within the celebration, the priest greets the people, saying, Dominus vobiscum, “The Lord be with you.” He refers to the presence of the Lord in the midst of the Church. The phrase can be understood either as a wish, May the Lord be with you, or as a declaration, The Lord is with you.
When the Angel says to Gideon, “The Lord is with thee, valiant warrior,” he is inviting him to take heart, trusting in the unfailing presence of the Lord. Thus do we hear Gideon say at the end of the mysterious encounter, “I have seen the Angel of the Lord face to face” (Jgs 3:22). “And the Lord said to him: ‘Peace be with thee, fear not, thou shalt not die’” (Jgs 3:23).
Presence of Christ
How are we to understand the Dominus vobiscum of the Mass? It is a solemn and joyful affirmation of the presence of the Lord in the midst of the assembly. By His grace Christ is present and living in each baptized person for He is the Vine and we are the branches (Jn 15:5). According to Our Lord’s promise He is present also in the midst of those who come together in His Name. “Where there are two or three gathered together in my name, there am I in the midst of them” (Mt 18:20).
The Voice of Thy Salutation 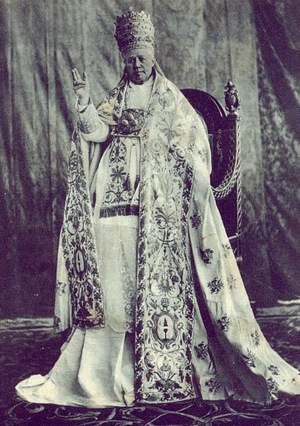 A thrill of jubilation should pass through the church every time the greeting of the priest, ancient and ever new, reaches the ears of the faithful. Recall what happened when the Virgin Mary greeted her cousin Elizabeth: “And she entered into the house of Zachary, and saluted Elizabeth. And it came to pass that when Elizabeth heard the salutation of Mary, the infant leaped in her womb. And Elizabeth was filled with the Holy Ghost” (Lk 1:41). At what precise moment did this infilling take place? Elizabeth says, “Behold as soon as the voice of thy salutation sounded in my ears” (Lk 1:44).
Chant
The musical tradition of the Roman Church has clothed this greeting in a little melody of two notes (sol and la) that is as sublime as it is simple. Dominus vobiscum. Only at the dialogue that precedes the Preface of the Mass does the greeting assume a more ample and solemn musical treatment, and this is to signify that at that very moment the priest and people are poised to enter into the Holy of Holies of the Mass.
Gesture
In singing these words, the priest extends his arms towards the assembly. He opens his hands as if to embrace all present and draw them into one single prayer to the Father, through the Son, in the Holy Spirit. This particular gesture is reserved to bishops and priests. Though deacons are allowed to say, “The Lord be with you,” they do so with folded hands. It belongs to the bishop and to the priest to impart the grace of the Lord’s presence to the faithful, and to take them up with him into the prayer of Christ to the Father.

Sometimes one sees devout lay people imitating the gesture of the priest by extending their hands in reply. While this may be an expression of piety, it is not permitted because it does not correspond to the deeper truth of the liturgy’s divinely constituted order.
Getting It Right
The correct response to the greeting of the priest is, Et cum spiritu tuo, “And with your spirit.” We know that very soon the flawed translation that has been in use in English since 1970 will be corrected. This correction was mandated by the Holy See in article 56 of the Instruction Liturgiam Authenticam, which says: “Certain expressions that belong to the heritage of the whole or of a great part of the ancient Church, as well as others that have become part of the general human patrimony, are to be respected by a translation that is as literal as possible, as for example the words of the people’s response Et cum spiritu tuo, or the expression mea culpa, mea culpa, mea maxima culpa in the Act of Penance of the Order of Mass.”
The Iconicity of the Priest
“And with your spirit” is not merely a way of saying, “And with you too.” In our Catholic tradition it refers to the “spirit” of the priest, that is, to the particular grace imparted to him by ordination, leaving an indelible character on his soul. It is the assembly’s way of saying, “And we, for our part, recognize the unique presence of Christ, Head of the Mystical Body and Bridegroom of the Church, in you, His priest.” The unique hieratic iconicity of the priest is thus affirmed.
Pius X and Benedict XVI
Having commented at such length on the angel’s greeting to Gideon, I will not be able to say too much about Pope Saint Pius X. I do want to note that just as the last century began under the reign of a Pope committed to the restoration of all things in Christ by means of a restoration of the sacred liturgy, so too does this new century begin under the reign of a Pope committed to the very same things.
Pope Benedict’s Motu Proprio, Summorum Pontificum, is organically and spiritually related to Tra le Sollecitudini, the famous Motu Proprio of Saint Pius X on November 22, 1903, that launched the restoration of Gregorian Chant to the liturgy of the Roman Rite.
Like Pope Pius X, Pope Benedict XVI is forward looking. One of the most significant lines in his Motu Proprio addresses the aspirations of young people in search of a liturgy that breathes the sacred. The Holy Father writes: “Immediately after the Second Vatican Council it was presumed that requests for the use of the 1962 Missal would be limited to the older generation which had grown up with it, but in the meantime it has clearly been demonstrated that young persons too have discovered this liturgical form, felt its attraction and found in it a form of encounter with the Mystery of the Most Holy Eucharist, particularly suited to them.”
Pope Saint Pius X, intercede today for Pope Benedict XI and for the whole Church. There is joy in the unfailing help of the Holy Spirit and in the abiding presence of Our Lord who speaks a word of comfort to each of us today: “With men this is impossible, but with God all things are possible” (Mt 19:26). With God. Is that not the answer to every difficulty? With God. The Lord is with you.