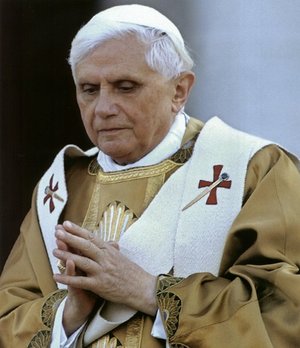 Benedict XVI: Blessed by Name and by Grace
To shepherd His Church at the beginning of this new millennium, God has given us a Pope blessed by name — Benedictus — and by grace. Pope Benedict XVI has a Benedictine world view. The Holy Father reads life through the lens of the Rule of Saint Benedict. The wisdom of the Holy Rule permeates Pope Benedict XVI. One might say that the style of his pontificate is abbatial; he is Father, Doctor, and Pontiff. His priorities are very much those of his great Benedictine predecessor, Pope Saint Gregory the Great.
Benedictine Zeal for the Work of God
In his Apostolic Letter, Summorum Pontificum, Pope Benedict XVI reveals his benedictine soul, and alludes to the role of Saint Gregory the Great, and to the mission of Benedictine monks and nuns in the organic development and promotion of the sacred liturgy. He writes:
Up to our own times, it has been the constant concern of supreme pontiffs to ensure that the Church of Christ offers a worthy ritual to the Divine Majesty, ‘to the praise and glory of His name,’ and ‘to the benefit of all His Holy Church.’
Note the three points of the Holy Father’s opening statement:
— the offering of a worthy ritual to the Divine Majesty
— the primacy of praise and doxology
— the affirmation that such worship redounds to the benefit of the whole Church of Christ
Usages Universally Accepted
Since time immemorial it has been necessary – as it is also for the future – to maintain the principle according to which ‘each particular Church must concur with the universal Church, not only as regards the doctrine of the faith and the sacramental signs, but also as regards the usages universally accepted by uninterrupted apostolic tradition, which must be observed not only to avoid errors but also to transmit the integrity of the faith, because the Church’s law of prayer corresponds to her law of faith.’
Vehicles of Truth and of Light
Pope Benedict XVI teaches that the Church’s law of faith is expressed not only in words and in the signs proper to the seven sacraments, but also in the very way of carrying out the sacred liturgy, in all of the traditional and universally accepted usages accepted by uninterrupted apostolic tradition. He is saying that the traditional ceremonial and rubrical elements of our Catholic liturgy are vehicles of truth and of light. It is, therefore, perilous to the integrity of the faith when these are arbitrarily or lightly changed. Over the past forty years many of these have been abandoned, with dire results for the life of the Church.

Saint Gregory the Great and the Benedictine Mission
Among the pontiffs who showed that requisite concern, particularly outstanding is the name of St. Gregory the Great, who
1) made every effort to ensure that the new peoples of Europe received both the Catholic faith and the treasures of worship and culture that had been accumulated by the Romans in preceding centuries.
2) He commanded that the form of the sacred liturgy as celebrated in Rome (concerning both the Sacrifice of Mass and the Divine Office) be conserved.
3) He took great concern to ensure the dissemination of monks and nuns who, following the Rule of Saint Benedict, together with the announcement of the Gospel illustrated with their lives the wise provision of their Rule that ‘nothing should be placed before the work of God.’
Beauty
Pope Benedict addresses the intersection of culture with holiness. Whenever and wherever holiness engenders culture, that culture’s distiniguishing characteristic is beauty. When an existing culture is converted to holiness, the fruit of that conversion is beauty.
Culture and Holiness
In this way the sacred liturgy, celebrated according to the Roman use, enriched not only the faith and piety but also the culture of many peoples.
It is known, in fact, that the Latin liturgy of the Church in its various forms, in each century of the Christian era, has been a spur to the spiritual life of many saints, has reinforced many peoples in the virtue of religion and fecundated their piety.
With Dilated Hearts
In promulgating Summorum Pontificum, Pope Benedict XVI invites all Catholics to have hearts that are opened wide. This, of course, is an essentially Benedictine theme: the dilated heart. “Through the continual practice of monastic observance and the life of faith, our hearts are opened wide, and the way of God’s commandments is run in a sweetness of love that is beyond words” (RSB, Pro 49).
Eucharistic Catholicization
Where and how are our hearts dilated to the dimensions of the Heart of Christ? In the worthy celebration of the Holy Sacrifice of the Mass. One who receives the Body and Blood of Christ cannot remain narrow or closed. Actual participation in the sacred liturgy brings about our conversion . . . the catholicization of our hearts. Enter, then, with profound reverence into the celebration of the Holy Mysteries, rejoicing in the two Benedicts whom God has given us as Holy Fathers.