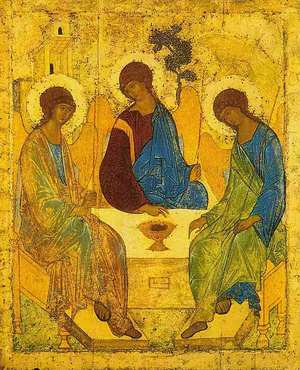 The Most Holy Trinity
The episode recounted in today’s passage from Genesis — the hospitality of Abraham — is the subject of Saint Andrew Roublev’s icon of the Holy Trinity. What the reading delivered in words the icon delivers in form and line and color. The tradition speaks not of “painting” an icon, but of “writing” one. The icon invites, in its own way, to a kind of lectio divina.
Lectio, Meditatio, Oratio, Contemplatio
Seeing the icon, one begins to read it: lectio. Its message enters not through the ears but through the eyes. By searching out the icon, by looking at it again and again with perseverance and openness, one discovers its secrets: meditatio. Then one begins to pray before the icon, reflecting the image itself back to God as the expression of the heart’s desire, contrition, adoration, and thanksgiving: oratio. When the icon becomes something interior, when the soul receives a gentle impression of the image that draws it to adoration, one can begin to speak of contemplatio.
Visual Fasting
People pulled in many directions at once or solicited by multiple desires find it difficult to enter into the mode of expression proper to the icon. Contemplation of the icon requires visual fasting: a willingness to forego the satisfaction of a thousand glances in order to gaze in singleheartedness upon “the one thing necessary” (Lk 10:42). This is what is meant perhaps by the traditional monastic practice of “custody of the eyes.” By it one learns to keep one’s eyes for one thing only: the “glory of God shining on the face of Christ” (cf. 2 Cor 4:6). A wise old monk once commented that the interior focus of a community could be discerned in its outward practice of custody of the eyes. By this he meant that one who truly seeks God has eyes for God alone and is willing to fast visually in preparation for seeing what lies hidden, “even within the veil” (Heb 6:19).
Cultural Conversion
Certain cultural prejudices make it hard for us to adjust to icons. Insofar as we are children of this age we are shallow. We prefer what holds a more immediate appeal to the senses. A worldly sensibility looks for something more naturalistic, something more romantic or sentimental. Dom Gregory Collins of Glenstal Abbey in Ireland says that, “Living the kind of spiritual life demanded to . . . contemplate the icon, means re-educating one’s sense of sight. It entails purification from superficial seeing, a move away from a mode of perception that stops short of the hidden depth of things or which remains captivated only by their surface glitter.”
Plainchant
Dom Gregory suggests too that there is an analogy between plainchant and the icon. The icon is to the eyes what plainchant is to the ears. In a monastery one expects to find — what shall I call it? — the ear purified and refined through a kind of fasting so as to hear the “still, small voice” that Elijah recognized on Horeb. “And when Elijah heard it, he covered his face with a mantle, and coming forth stood in the entering in of the cave” (3 K 19:13). The austerity of the traditional chant of the Church — its poverty, its chastity, its uncompromising obedience to the Word — makes it increasingly foreign to our culture and, paradoxically, increasingly attractive to young people challenged by the radicality of life for God alone.