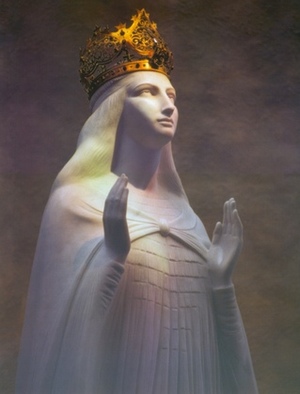 To Mayo and Leitrim
On Saturday 30 June, making my way via Ireland to the United States, I will fly Aerlingus from Rome to Dublin, and then from Dublin to Knock in County Mayo. After a few days in Knock I will travel the short distance northeast to Carrick–on Shannon in County Leitrim to visit Cousin John McKeon.
As a small boy, I heard about Knock from my Grandmother Margaret Kirby (1900–1993). Her Aunt Mary had gone there on pilgrimage and sent her a little bottle of blessed water from the shrine. Grandma told me what she knew about the apparitions. In 1988, when I went to Knock together with my Mom, Dad and brother Terence, I was able to celebrate Holy Mass on the site of the apparitions.
Actuosa Participatio and the Silence of the Mother of God
The apparition at Knock is unusual in that the Blessed Virgin spoke no message and uttered no warning; she asked for nothing. Our Lady was silent and, at the same time, intensely present to the Immolated Lamb upon the altar, and to the people who watched the apparition.
The contemplative silence of the Mother of God speaks to my own understanding of actuosa participatio (actual participation) in the Holy Sacrifice of the Mass. There is a silent inward cleaving to the Mystery of the Eucharist that precedes and perfects all other forms of participation in the Holy Sacrifice. The fifteen parishioners of Knock, young and old, to whom the Blessed Virgin appeared on that rainy night in 1879, were accustomed to “hearing Mass” in silence. By her own silence in the presence of The Mystery, the Mother of Jesus was confirming them in theirs.

Toward the Recovery of Silence
The Irish custom of silence at the Holy Mysteries was, in its own way, an actual participation in the sacramental re-presentation of the Sacrifice of Christ. While silence is not the only mode of actual participation in the Mass, it remains one that is valid, fruitful, and profoundly unifying. It is remarkable that the neglect of spaces and moments of silence within the celebration of the Mass — even of those clearly prescribed by the Roman Missal — had led, in most places, to the complete loss of silence around the Mass, that is to say, in church before and after the celebration.
Knock After the Motu Proprio
If things here in Rome go this week as I rather suspect they will, I will find myself in Knock very shortly after the promulgation of the long-awaited Motu Proprio of Pope Benedict XVI. Coincidence? I don’t think so. Knock is the Blessed Virgin’s invitation to enter deeply into the Holy Sacrifice of the Mass. The presence of the Lamb upon the altar surmounted by the cross, of angels in adoration, of Saint John proclaiming the Word, and of Saint Joseph reverently inclined toward the Virgin Mother is, in pictorial form, a mystagogical catechesis waiting to be developed.
In Sacramentum Caritatis, Pope Benedict XVI writes:
The Church’s great liturgical tradition teaches us that fruitful participation in the liturgy requires that one be personally conformed to the mystery being celebrated, offering one’s life to God in unity with the sacrifice of Christ for the salvation of the whole world. For this reason, the Synod of Bishops asked that the faithful be helped to make their interior dispositions correspond to their gestures and words. Otherwise, however carefully planned and executed our liturgies may be, they would risk falling into a certain ritualism. Hence the need to provide an education in eucharistic faith capable of enabling the faithful to live personally what they celebrate. Given the vital importance of this personal and conscious participation, what methods of formation are needed? The Synod Fathers unanimously indicated, in this regard, a mystagogical approach to catechesis, which would lead the faithful to understand more deeply the mysteries being celebrated.
A Devout Method
Compare the teaching of the Holy Father with this Devout Method of Hearing Mass Before Holy Communion in my heirloom Treasury of the Sacred Heart published in 1860 in Dublin, that is nineteen years before the apparition at Knock:
To hear Mass with fruit, and to obtain from that adorable sacrifice abundant treasures of grace, there is no method more efficacious than to unite ourselves with Jesus Christ, who is at once our Priest, Mediator, and Victim. Separated from Him we are nothing, but even in the eyes of God Himself, we are truly great, by and with His Beloved Son. United thus with Jesus Christ, covered, as it were with His merits, present yourself before the throne of mercy.

This was written in a widely diffused household manual of Catholic piety 103 years before the Constitution on the Sacred Liturgy of the Second Vatican Council. It is not a complete presentation of the mystery of the Mass. Its genre is that of the pious exhortation, not of a comprehensive theology of the Eucharist. That being said, it strikes me that this little Irish text goes to the heart of what is meant by actual participation: communion with Christ, Priest, Mediator, and Victim. Through Him, with Him, and in Him, all who partake of His Sacred Body and Precious Blood are priests, mediators, and victims, offering, and offered to the Father, in the Holy Spirit.
Saint Joseph and Saint John
One last thing. The presence at Knock of Saint Joseph and of Saint John the Evangelist is especially significant to me. Although it was not so in 1879, both are now named in the venerable Roman Canon. They are the two men chosen by God to share most intimately in the life of the Blessed Virgin Mary. Saint Joseph obeyed the word of the Angel of the Lord: “Joseph, son of David, fear not to take unto thee Mary thy wife, for that which is conceived in her, is of the Holy Ghost” (Mt 1:20). Saint John, for his part, obeyed the word of the crucified Jesus: “Behold thy mother.” “And from that hour, the disciple took her to his own” (Jn 19:27).
Saint Joseph and Saint John entered in the silence of Blessed Virgin. One cannot live in the company of Mary without being drawn into her silence, that is, into the ceaseless prayer of her Sorrowful and Immaculate Heart, and into the mystery of the Mass: the Sacrifice of the Lamb renewed in an unbloody manner on the altars of the world.