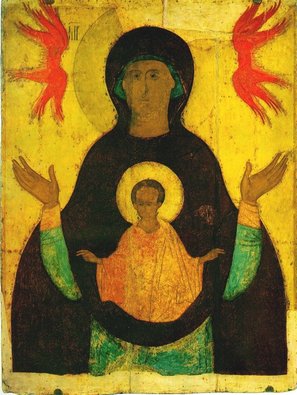 Thursday Adoration
Today, being Thursday, is our weekly day of Eucharistic Adoration at Santa Croce in Gerusalemme. The Blessed Sacrament is exposed from Tierce until Vespers in our choir chapel in the cloister. We take turns watching in adoration before the Blessed Sacrament, each member of the community having his designated hour.

Blessed is she who believed” (Lk 1:45). Mary also anticipated, in the mystery of the incarnation, the Church’s Eucharistic faith. When, at the Visitation, she bore in her womb the Word made flesh, she became in some way a “tabernacle” – the first “tabernacle” in history – in which the Son of God, still invisible to our human gaze, allowed himself to be adored by Elizabeth, radiating his light as it were through the eyes and the voice of Mary.

The Hidden Face of Christ
The Face of Christ was hidden in Mary’s virginal womb: hidden, yet wonderfully radiant, Christ was hidden in Mary as He is hidden in the tabernacle. (I think that the traditional use of the tabernacle veil suggests that very connection.) The Virgin of the Visitation bears within herself the Human Face of God. She holds it beneath her heart. The joy on Mary’s face as she intones her Magnificat is the very joy that shines eternally on the Face of the Word in the presence of the Father. Mary’s womb sheltered “the knowledge of the glory of God in the Face of Christ Jesus” (2 Cor 4:6).

The Eucharistic Face of Christ
When the Body of Christ is displayed to our eyes at Mass, or exposed to our gaze in the monstrance during adoration, His Eucharistic Face streams with light for every darkness, healing for every brokenness, joy for every sorrow, and pardon for every sin. When Christ is “brought forth” in the Eucharist, as he was from Mary’s virginal womb on the first Christmas, the Church can sing what she sings every year at First Vespers of Christmas: Rex pacificus magnificatus est, cuius vultum desiderat universa terra — “The King of peace is magnified, the One whose face the whole earth desires to see.”

Visited by Joy
The festival of the Visitation invites to imitate the faith of Elizabeth who, without seeing it, was illumined by the Human Face of God tabernacled in Mary’s womb. For us the same Human Face of God is hidden beneath the sacramental veils, the appearances of bread and wine. The Most Holy Eucharist is the Visitation of the Hidden Christ. He come always with Mary that from her we might learn, as John Paul II said, “to sing the Magnificat in a Eucharistic key.” Thus does the Hidden Face of Christ become for us, as it was for Mary and for Elizabeth, the wellspring of joy in God.