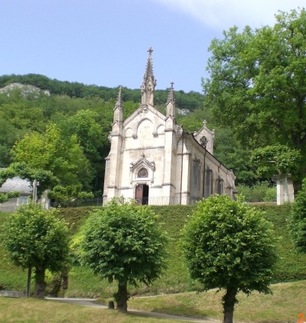 A Little Known Manifestation of the Blessed Virgin
One of the joys of my recent trip to France was a visit with Thérèse Dussud to the shrine of Notre–Dame–du-Chêne (Our Lady of the Oak) in the diocese of Besançon in eastern France. The miraculous events occurred in 1803, well before the Marian apparitions at rue du Bac, la Salette, Lourdes, and Pontmain.

In the Radiance of the Eucharist
The restoration of Catholic worship that followed the Concordat in 1802 made it possible for the little parish of Maisières at Scey-en-Varais to organize a solemn celebration of First Holy Communion, the first such celebration in twelve years. Thirteen year old Cécile Mille was among the First Communicants.

A Lady Dressed in White
Returning home from the First Communion Mass together with a friend, Cécile saw a beautiful Lady clothed in white surrounded by maidens bearing candles. She assumed it was a procession of First Communicants. Then the Lady stopped in front of an oak tree and the attendants disappeared. Against the trunk of the tree, at the parting of the branches, Cécile saw a statue with lighted candles on both sides. Cécile’s friend, however, saw nothing.

Incredulity at Home
As soon as Cécile arrived home, she recounted the apparition to her parents. Her father, having consulted the parish priest and a gentleman of some learning, dismissed Cécile’s story as the product of a pious imagination stimulated by the solemnities of the First Holy Communion.

On the Feast of the Assumption

On the feast of the Assumption of the same year, 1803, between 7 and 8 o’clock in the morning, Cécile’s father, Pierre–Antoine Mille, his three daughters, and an intinerant labourer named Louis Seure were on their way to Mass. Passing the oak tree, Cécile’s younger sister Marguerite said to Louis Seure, “This is where my sister said she saw the lady on the day of her First Communion.” With that, Seure looked at the oak tree and saw brilliant rays of light emanating from the tree trunk. As the church bell was ringing for Mass and the little group did not want to be late, they hurried away, having decided to return to the spot after Mass.

The Hidden Statue Revealed
After Mass, returning to the oak tree with a ladder and an axe, the little group found themselves surrounded by the entire village of Maisières. Monsieur Seure opened the trunk of the tree at the spot indicated by the rays of light. Within the tree was a little earthenware statue of the Blessed Virgin, about 6 inches tall, dating from the time of Louis XIV. Some devout client of the Mother of God had placed the statue there; with time, the tree grew around the statue, hiding it completely from view.

More to the Story
The little statue hidden in the oak tree escaped the iconoclastic fury of the Revolution. Many other images of the Blessed Virgin Mary were desecrated, defaced, or destroyed. Before the Revolution, Cécile Mille’s grandfather had enthroned a similar statue of the Blessed Virgin in another tree in the same valley. The tree was chopped down and the statue desecrated, under the pretext that the laws of the Revolution forbade all “emblems of superstition.” Our Lady of the Oak chose to reveal herself to the granddaughter of the very man who had honoured another image of her in the same place. The impiety of the revolutionaries was confounded by the piety of a First Communicant. 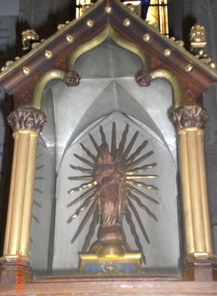 My Own Impressions
Today the little statue is enshrined in a little neo–gothic church that resembles a jewel box set in the woods. The walls of the church are covered with white marble ex–voto plaques attesting to the countless healings and other signs and graces granted through the intercession of the Blessed Virgin Mary. Among the more remarkable ex–votos is one commemorating a Mass celebrated in the church during which the faithful heard choirs of angels singing the preface with the priest!

Iconoclasm
All iconoclasm is, by its very nature, an offense against the adorable mystery of the Incarnation, a diabolical refusal of the wonderful economy by which the Eternal Son of God took on a Human Face. “He that seeth me seeth the Father also” (Jn 14:9). Iconoclasm directed against the Virgin Mother of God is the infernal dragon’s attempt to erase from the hearts of Adam’s children the memory of her by whom he is already defeated and crushed. When Sister Lucia of Fatima explained the Five First Saturdays in honour of the Immaculate Heart of Mary, one of the reasons she put forth was the need to make reparation for those who outrage the Mother of God in her holy images.

Images of the Mother of God
The Blessed Virgin Mary is sensitive to the ways in which we honour — or dishonour — the images that depict her. Again and again she has demonstrated that she is present, seeking out those who seek her in her images to help and comfort them. The so–called Miraculous Medal is, in fact, a little icon of the All–Holy and Immaculate Virgin Mary. The phenomenal spread of the icon of the Mother of Perpetual Help all over the world is yet another indication of the Virgin Mary’s desire to be present to her children in every place and in all the circumstances of life.

The Saints
To Saint Bernard who one day greeted her image, saying Ave, Maria, the Mother of God inclined her head and returned the greeting, saying, Ave, Bernarde. Saint Alphonsus recommended a daily “visit” to an image of the Madonna. As a young bishop, the Servant of God Pope John Paul II vowed that he would make as many visits to sanctuaries of the Mother of God as there were vocations in his diocesan seminary. In many monasteries there is the custom of stopping for a moment before an image of the Blessed Virgin Mary after Compline on the way to bed or before dawn on the way to Matins.

The Family, a Domestic Church
A Catholic home is a domestic church. Without an image of the Mother of God prominently displayed and lovingly honoured it will suffer from a kind of spiritual chill. Little ones need to be taught to go to Mary in her images, to kiss them, to speak to her. They love to bring her flowers and, during the family time, light candles before her image. Such practices mark a child for life and will often bear fruit in moments of crisis, providing comfort and stability.

Toward the Eucharist
Notre–Dame–du–Chêne revealed herself hiding in the oak tree to give people a visible sign of her presence and to invite them to come to her. In her arms she bears Jesus. Together, the two of them hold a bunch of grapes, the sign of the Eucharist. Notre–Dame–du–Chêne points to the Sacramentum Caritatis, the Sacrament of Charity, the mystery of a Love that desires to be desired, the mystery of a Love outpoured and tasted in the Blood of the Lamb.