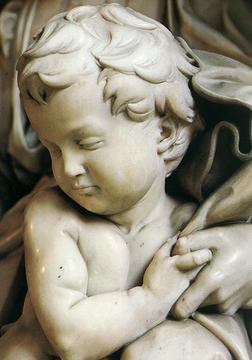 The Bambino clasping His Mamma’s hand is by Michelangelo. Already, I see in this something of the Pietà.

December 22
1 Samuel 1:24-28
1 Samuel 2:1, 4-5, 6-7, 8abcd
Luke 1:46-56
Preaching on the Propers
Some of you have asked why I so often preach on the Collect of the Mass. There are several reasons for this. First, the General Instruction of the Roman Missal recommends that priests preach not only on the Gospel of the day or on the other readings, but also on the Proper and Ordinary of the Mass, that is, on the other parts of the Mass, both those that change according to the season and day, and those common to every celebration.
Devotion to the Collect
The Collect of the Mass is a privileged element of the sacred liturgy. It instructs us in the mysteries of our faith and articulates the prayer of the whole Church, a prayer that that is the fruit of the Word of God heard (lectio) and repeated in antiphons and responsories (meditatio). In the great seasons of the Church Year and on feasts, the same Collect is repeated at Mass and at all the Hours of the Divine Office, except Compline. This repetition of the Collect is intended to anchor it our hearts. Dom Guéranger, the restorer of Benedictine life in nineteenth France, once told a novice bewildered by the vast variety of pious devotions, that a single one was indispensable and sufficient: devotion to the Collect of the day.
An Inspired Prayer
The Collect of the day is a distillation of the Church’s own reflection on the Word of God. Inspired by the Holy Spirit, the Collect rises in the soul of the Church. At Mass and the Divine Office, it comes to flower on the lips of her children to bear fruit in their lives.
Unspeakable Groanings
None of us know how to pray rightly. Often in our prayer we ask for things according to our own dim lights. We ask God for the things we think we need or for the things we think we want. But our needing and our wanting are, more often than not, obscure and flawed. This is the “infirmity” of our prayer. Saint Paul says: “The Spirit also helpeth our infirmity. For we know not what we should pray for as we ought; but the Spirit himself asketh for us with unspeakable groanings. And he that searcheth the hearts, knoweth what the Spirit desireth; because he asketh for the saints according to God” (Rom 8:26-27). The Collect articulates for us the unspeakable groanings of the Spirit. When we pray the Collect, making it our own, we are asking according to God, and not according to our own dim and limited perceptions.

The Church’s Own Discernment
Mother Marie des Douleurs said that her daughters would need very little in the way of spiritual direction because they were to live from the liturgy of the Church. The work of a spiritual director is to help a soul discern rightly so as to pray rightly and live rightly. The Mother’s intuition was consonant with that of Abbot Marmion, Dom Vandeur and all the great Benedictines of the last century. It was this: the liturgy is the Church’s own discernment. Nothing passes into the sacred liturgy that has not been purified in the crucible of Tradition. She who lives from the liturgy will pray rightly and, by the all-sufficient grace of God, live rightly.
Today’s Collect
In today’s Collect we consider the mystery of Christ’s redeeming incarnation.
O God who,
seeing that humankind had fallen into death,
willed to redeem us by the advent of Thine only-begotten Son,
grant, we beseech Thee,
that those who confess His incarnation with humble devotion,
may be found worthy of the fellowship of the Redeemer.
O God who, seeing that humankind had fallen into death
The first line shows us God looking at mankind’s sorry plight after the fall. You recall the passage from Genesis: “And when they heard the voice of the Lord God walking in paradise at the afternoon air, Adam and his wife hid themselves from the face of the Lord, amidst the trees of paradise. And the Lord God called to Adam, and said to him, “Where art thou?” (Gn 3:8-9). God comes in search of us to put right what is wrong, to repair what is broken, to heal the wounds that we, being sinners, inflict on ourselves and each other.
Willed to redeem us by the advent of your only-begotten Son
The Latin here is very strong — voluisti. Seeing our sorry state, looking upon the tragedy of our fall from grace, God resolved, willed, determined to redeem us by the advent of his only-begotten Son.
Grant, we beseech you, that those who confess his incarnation with humble devotion
To confess the incarnation of the only-begotten Son is to allow oneself to be changed by it. In the first phrase of the Collect, the Father gazes with compassion on us in our need; in this line we gaze with humble devotion upon the remedy, the Word made flesh.
May be found worthy of the fellowship of the Redeemer
What we translate here as fellowship is consortio in the Latin. Consortio is one of those amazingly rich words in the liturgical vocabulary of the Church. It means partnership, participation, community, and shared life. Our consortio with the Redeemer will be perfect and everlasting in heaven, but it begins here on earth in the gift and mystery of the Eucharist.
The Eucharist makes us consorts of the Redeemer: partakers, participants, sharers in his life with the Father and the Holy Spirit. The Eucharist is the whole mystery of the redeeming Incarnation given us here and now, applied to all our needs, and lifting us out of sin into the “face-to-face” with God for which we were created.