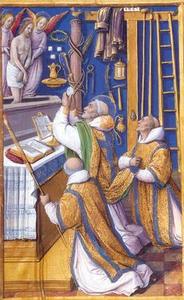 It was one year ago today that I began standing before the altar versus apsidem from the Offertory until the Communion of the Mass at the monastery where I serve as chaplain. I prepared this change with a careful pastoral catechesis. For guests coming to Mass at the monastery, I posted a notice in the narthex. Here is the text of the notice:
Pastoral Note
It is good, from time to time, to break with routine and do what we do daily from a different perspective. Given that the reformed liturgy gives the priest the option of standing in front of the altar, one with the people, for the Eucharistic Prayer, I will avail myself of this option during the seven days before Christmas. We are no longer accustomed to doing this, but it remains a venerable and perfectly legitimate practice. It is especially suited to these last days of Advent when the whole Church faces in one direction, scanning the horizon, waiting for the coming of her Lord.
Pope Benedict XVI explains this very well. He says, “Looking at the priest has no importance. What matters is looking together at the Lord. It is not (in the Eucharistic Prayer) a question of dialogue but of common worship, of setting off toward the One who is to come. What corresponds with the reality of what is happening is not the closed circle but the common movement forward, expressed in a common direction for prayer.”
Let us then welcome a change in our routine during these last days of Advent, not for the sake of change, but in order to advance together toward the Lord who came, who comes, and who is to come.

On the whole, the change was received well. Some wondered if, in fact, it was permitted. One woman complained about it and stopped coming to Mass at the monastery. Two or three nuns out of about twenty were uncomfortable with the practice at first, but seem to have adjusted to it. Several said that they preferred it and were relieved not to have to look at the face of the priest through the whole Eucharistic Prayer!
After a year of celebrating the Holy Mysteries ad apsidem, what are my own conclusions? The entire celebration of Holy Mass has gained immensely in recollection, in reverence and, most importantly, in God–centredness. There has been a marked increase in what Pope John Paul II desired the fruit of the Year of the Eucharist to be: Eucharistic amazement. There is a new awareness of the mystery of the Holy Sacrifice offered to God with the priest and people together standing in the presence of the Divine Majesty.
I am absolutely convinced that the ad apsidem position is essential to the recovery of the sacred. It goes a long way in restoring a certain rightness to the practice of an Ordo Missae that for too long has had so much wrong with it. Reverend and dear brother priests, take heart, and fear not!