Skip to content
HomeMatters LiturgicalHow Would the “Old Mass” Help the “New Mass”? 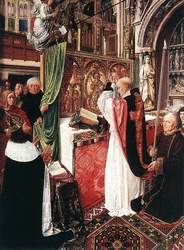 Father Tim Finigan over at The Hermeneutic of Continuity offers three compelling reflections on the question. His suggestions give some substance to what is generally called “the reform of the reform.” Can the so–called Novus Ordo be salvaged? I don’t pretend to have the answer, but Father Tim makes some excellent observations.
One can at least begin by doing what the current GIRM allows, such as:
1. the unified position ad apsidem of priest and people during the Liturgy of the Eucharist;
2. on the part of the priest: abstinence from all extraneous, subjective, and casual remarks;
3. respect for the Proper texts of the Mass as given in the Graduale Romanum and in the Missale Romanum;
4. the cantillation of the priest’s and deacon’s parts according to the traditional tones of the Roman Rite;
5. the fitting use of incense and bells.
Celebrating in the vernacular, there remains still the problem of the frightfully flawed translations in the 1974 Sacramentary. I try to post here my own translations of the Mass texts each day — for lectio divina and comparative study if for nothing else — as well as General Intercessions based on the lectionary, feast, or mystery being celebrated.